Jack Furst hosted this year’s Millennium Class Reunion at his ranch in Argyle, Texas at the beginning of October.  The topic of discussion was Walter Isaacson’s book Steve Jobs. Mark Contreras sent the following note: “The reunion was good had 10 of 19 and Andy Cunningham and Donna Auguste led us through the Jobs book that Walter wrote.” 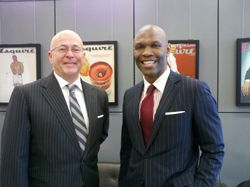 Chris Howard writes: “I am happy to report that our oldest son, Cohen, graduated from Virginia Episcopal School and enrolled at Sewanee (The University of the South) in Tennessee and is thoroughly enjoying the experience thus far.  Our youngest son, Joshua, enrolled at Episcopal High School in Alexandria, Virginia so Barbara and I are almost “empty-nesters” but for our dog, the indefatigable Sammy – a beagle, Jack Russell terrier mix.   Summer was delightful with business, professional and personal travel intermixed throughout including West Virginia, Annapolis, the Dominican Republic, Dallas and Vancouver, Canada.  I had the good fortune of moderating a panel at the Aspen Ideas Festival entitled “Raising Boys, Engaging Guys & Educating Men” (you may listen to the podcast by clicking this link) and was awarded the Pathfinder Award by my alma mater, the US Air Force Academy.  My fourth year as president of Hampden-Sydney College began on 28 August as we welcomed the second largest freshmen class in our school’s 238 year history and the most highly-qualified as well as the highest percentage of Eagle Scouts – 14%.  We also launched an innovative program called “C-Day” whereby the entire College community comes together to help our students discern their purpose, passion and calling in life (link here).  Finally, I am including a photo I took with David Granger, Editor-in-chief of Esquire Magazine;  we had an excellent meeting in his office a few months ago.”

Jack Giraudo reports:  “My wife Christine and I recently celebrated our 25th wedding anniversary, and our twins are applying to college this fall. Where did the time go!   My solar company Sonnedix is making headway despite the ill winds of the solar market and the global economy.  But it has been tough.  I wish all my classmates well, and welcome those visiting DC to look me up.” 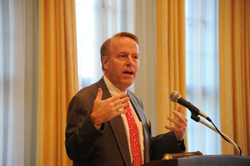