On Jun 2-3, 15 Great X Fellows gathered in the new Aspen Institute office’s in New York City for their 2012 reunion.  Many thanks to Kate Frucher, David Carmel and Deven Parekh for planning a terrific weekend, which included a discussion by guest lecturer Lowell Pettit (faculty member of the Sotheby’s Art Institute and Principal at Pettit Art Partners) in advance of a private tour of the MOMA. 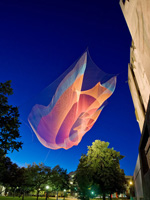 2006 Fellow Janet Echelman has been selected as one of Architectural Digest’s Innovators of 2012. The publication’s committee reviewed a wide range of artists, architects, landscape architects, and designers of all kinds to select the eight innovators who are “challenging received wisdom and conjuring a bold new world“.  Janet is most known for her permanent netted sculpture the scale of buildings that billow in the wind. The article describes Janet’s sculpture as “changing the very essence of urban spaces.”  You can read the Architectural Digest article here.  Additionally, the European premiere of Janet’s 1.26 sculpture will be the Amsterdam Light Festival, where it will headline the winter celebration which runs from December 7th through January 20th, 2013.  This cultural festival of light and water will illuminate Amsterdam’s city center with light sculptures by contemporary artists along the historic canals and river. The signature project will be Janet’s 230-foot aerial sculpture suspended over the famous Amstel River in front of the Amsterdam Stopera, which houses the City Hall and Muziektheater.  The sculpture, titled 1.26, draws inspiration from NASA laboratory data on the 2010 Chile earthquake and the 1.26-microsecond shortening of the day. Janet generated the sculpture’s form using a 3-D model of the earthquake’s ensuing tsunami in collaboration with scientists from NOAA (United States National Oceanographic and Atmospheric Administration).

Maryana Iskander writes:  “Greetings from Johannesburg where I am still in love with ALI Inaugural Class Fellow Ketso Gordan! My transition to a new life in a new home continues and I am grateful for all the support and encouragement. I have been blessed to see many AGLN friends on both sides of the ocean. I have seen Sonal Shah, Cheryl Dorsey, Stace Lindsay, Sean Hinton, Manoj Kumar, Srinija Srinivasan, Judith Aidoo, Shamina Singh and her wife Ashley Bell all in South Africa. I went to Janet Echelman‘s fabulous studio in May and also popped in to see Peter, Abigail, Caitlin and the team in Washington, DC. We just hosted Aspen Board Emeritus Member Andy Stern over the weekend and had a lively and engaging discussion with him and others passionate about social change.   I have just joined as COO an innovative new project called the Harambee Youth Employment Accelerator that partners with large employers to secure entry-level jobs for South Africa’s most socially disadvantaged young people who have graduated from high school or technical colleges yet lack access in finding and retaining work in the formal economy. With support from social investors, fees from employers, and a government jobs grant, we have committed to securing gainful employment for 10,000 young people by 2014. I am also advising the Hewlett Foundation’s Global Development and Population program on their strategy for Africa, and serving on Planned Parenthood’s Global Advisory Board with the fabulous Kavita Ramdas!”

Congratulations to Peggy Smyth recently joined Con Edison in NYC as VP of Finance, as well as joining the board of Vonage.

The Burke Rehabilitation Hospital and Burke Medical Research Institute honored David Carmel with the 2012 Burke Award on June 7 at The Ritz Carlton of Westchester. The Burke Award is the highest honor bestowed by Burke and its board of the directors. It is presented to individuals or groups who have demonstrated strength in overcoming a disability, those whose efforts have contributed to helping people with disability gain independence, those who have made significant contributions to science that led to a better understanding of physical disability or for those who have made contributions to the development of rehabilitation.  Read more about the Burke Award and the 2012 winners here.