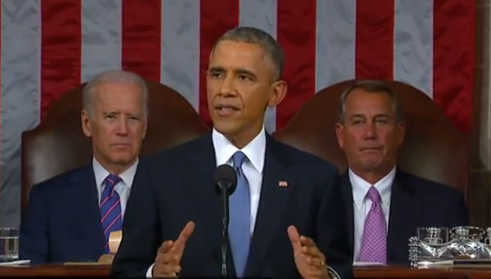 In response to last night’s State of the Union address, Aspen Institute program directors are reacting to President Barack Obama’s promises to tackle some of the biggest issues facing the nation today. Read below for a roundup of the directors’ responses.

On the middle class:

Last night, President Obama focused on the critical need to restore the promise of work. And while he included many worthwhile ideas — from raising the minimum wage, to addressing the need for childcare, to improving education and training — he remained focused on “the values at stake in the choices before us.”

Core American values — of opportunity, hard work, responsibility, and fair play — are called into question when 10.6 million working Americans live in poverty and tens of millions more have incomes just above that threshold. These same values are called into question when a majority of students in America’s public schools are poor; and when worker productivity has risen but wages have stagnated, all while profits are higher than they have ever been.

On providing opportunities for American families:

“The shadow of crisis has passed, and the State of the Union is strong,” President Obama said during his address last night. Yet with almost half of all children living in low-income families, we must answer the challenge of persistent inequality. We need policies that enable all families to attain the American Dream.

Families need education, economic and health supports that lead to careers, not unstable jobs; homes, not temporary shelters; and health and well-being, not band-aid fixes. This is a framework that creates opportunities for children, and the adults in their lives, to thrive.

Two-generation approaches like early childhood education paired with postsecondary education and employment pathways, as well as health care expansion, have the power, and the bipartisan support, to move the needle on poverty today, and ultimately, the quality of life for many generations to come.

On Obama’s proposal for two years of free community college:

In his State of the Union address, President Obama outlined a proposal to make community college free, to make “two years of college become as free and universal in America as high school is today.” Why is this such an important idea? Because, by 2020, nearly two-thirds of job openings will require some level of college education. Because the chances of living in poverty are cut by 50 percent when high school graduates go on to attain two years of college education. Because, due in part to the price tag, only half of low-income students go to college immediately after high school, compared to 80 percent of wealthy students.

There are plenty of details to be worked out — including how to hold community colleges accountable for better student outcomes and how to help community colleges develop the capacity to serve more students. But debating these issues should not obscure the urgent challenge: ensuring that American workers have the skills required to compete — and lead — in a global, knowledge-based economy. Free community college is the kind of bold idea that could work.

On economic opportunity for American workers:

Director, Skills for America’s Future at the Aspen Institute

While the fiscal components of the president’s prescription for a middle class renaissance received most of the attention in last night’s State of the Union address, Obama also recognized the critical role of employers in advancing the economic opportunity of their workers.

The president cited the leadership of companies like CVS and UPS in offering educational and training benefits — benefits  that give workers the chance to earn higher pay and advance in their careers. These employers have recognized that investing in their workers results in a higher-skilled workforce, lower employee turnover and recruitment costs, higher employee productivity, and improved customer service and product quality. When economic opportunity for America’s workers and the competitiveness of our industry coincide, the country wins.

The president rightly crowed last night about his domestic achievements, particularly the nation’s amazingly strong recovery from the brink of depression and Obamacare.

However, I found President Obama’s foreign policy comments to be unconvincing, to put it mildly. Although some partisan critics have exaggeratedly described his portrayal as an “alternative universe,” It is going too far to say that he described an “alternate universe,” as some partisan critics have put it, but I don’t think they’re that far off base. Even a mere scan of the headlines suggests that world events are spinning dangerously out of control and that terrorism is on the march around the globe.

Yes, we should avoid “dumb wars.” Yes, military force should be a last resort, and, if possible, we should work as much as we can with foreign partners, especially the countries most affected, when applying military force. But, just like on school playgrounds, there are bullies in the world who understand only force, and our manifest reluctance to use it nowadays only emboldens our enemies and ultimately makes military engagement more likely rather than less (and on terms much less favorable to us).

On corporate spending and taxes:

Will this be the year for the long-sought “Grand Bargain” that will allow corporations to repatriate funds in exchange for a commitment to investment in needed infrastructure, low-carbon tech, and job-generating research and development at home? For corporations to make the plunge, we need to significantly reduce the tax rate to a number every enterprise pays come hell or high water — let’s say 10 percent at the federal level. Then, for good measure, two more tax changes are needed to get the market to embrace the Invest in America Again agenda.

These two changes, as part of a more comprehensive set of ideas, were embraced in 2009 by an impressive cadre of market makers, from Warren Buffett to John Whitehead. It’s time to put our long-term vision for both business and society in gear.

It is notable that Obama barely referred to immigration reform and fell short of a call to action in his State of the Union address, with little more than a passing reference to striving students and hard working mothers being taken away from their children. Maybe he didn’t have to because the bump he got from Hispanics by taking executive action led to a 12-point increase in popularity among Latinos and 2 points overall (Gallup) and earned him and the Democratic Party goodwill from this critical demographic leading into the 2016 elections. Or maybe he just didn’t want to thumb his nose at Republicans in a speech that largely took the tone of finding areas for agreement.

In either case, as Mayor of Los Angeles and Aspen Global Leadership Network Rodel Fellow Eric Garcetti and other mayors, Republican and Democrat alike, made clear at a National Journal event earlier in the day, regardless of what the Federal Government does, cities around the country are taking action to integrate immigrants, because as Garcetti said, “I cannot afford not to have integration of immigrants because we pay in other ways if we don’t.”

The president’s remarks on foreign policy during last night’s State of the Union address demonstrated the world is complicated—and America’s foreign policy must be as well. His comments on China were a classic example. He first addressed China as a competitor who “wants to write the rules for the world’s fastest-growing region.”

Indeed, the US should expect opposition to the global order it has dominated for the past half-century given China’s push for an Asian Infrastructure Investment Bank and a new Silk Road. And yet, several paragraphs later, Obama focused on the breakthrough agreement on climate change as a poignant example of what can be achieved when the world’s two largest economies work together.

Likewise, American foreign policy will have to find a way around the temptation of zero-sum politics and ensure China follows the rules of the game while encouraging China to become a veritable partner in combating the many transnational issues that defy borders or unilateral solutions.

President Obama’s State of the Union address has added positive momentum to the digital access, privacy, and cyber-security conversations. In his address last night, he highlighted cyber-security, and gave privacy an unprecedented amount of attention for a SOTU speech. These are all issues which the Aspen Institute Communications and Society Program has recently addressed.

The Aspen Institute Task Force on Learning and the Internet issued a report last year, which we shared with the White House, Congressional committees, and other policymakers and stakeholders. It strongly recommended increasing access to broadband, improving digital literacy and protecting students’ privacy and safety in what we called a “trusted environment.”

But the Task Force also noted that it is important to allow students to realize the great opportunities that new learning technologies and fresh approaches offer, opportunities that the president also emphasized. Striking this balance is very difficult. Ideally, the legislation that goes forward will make progress in recognizing and resolving this difficult tension between seizing opportunities for learning while protecting students’ safety and privacy.

The president opened with a series of questions about who America wants to be in the years ahead: “Will we allow ourselves to be sorted into factions and turned against one another — or will we recapture the sense of common purpose that has always propelled America forward?” Unfortunately, current trendlines suggest that Americans feel increasingly disconnected from one another and their government.

Trust in government is near all-time lows, and turnout for the recent election was the lowest for a midterm in over 70 years. The wars we’ve fought and the sacrifices we’ve made on the battlefield have been fought by a military comprised of less than 1 percent of the population.

We can’t truly have a sense of common purpose without a sense of shared responsibility and sacrifice. The Franklin Project essentially provides a blueprint for turning some of the lofty rhetoric and ideals expressed in the SOTU into a reality. We envision a future in which a year of full-time national service is a cultural expectation, a common opportunity, and a civic rite of passage for every young American. If all young Americans served their country, we truly believe this would be the antidote to reinvigorating what Obama referred to as “the sense of common purpose that has always propelled America forward.”

On philanthropy and innovation:

Far too often, the philanthropic community must mobilize in times of crisis, whether the financial crisis of President Obama’s first term or the Ebola crisis of his last. But just as philanthropy is there to provide core services when there is no one left to act, so too can it lead the way — to innovate and invent in the face of our country’s most entrenched social issues.

The speed with which markets progress or livelihoods improve reflects not only the levels of funding we can mobilize, but also the trailblazing risks we are willing to take on behalf of our most vulnerable populations. These may be reputational risks, or they may be financial ones. They may unfold in a Detroit courtroom or a West African village.

Philanthropy cannot fill every gap on the path to social equity, but it can and should underwrite the innovation that leads us there.