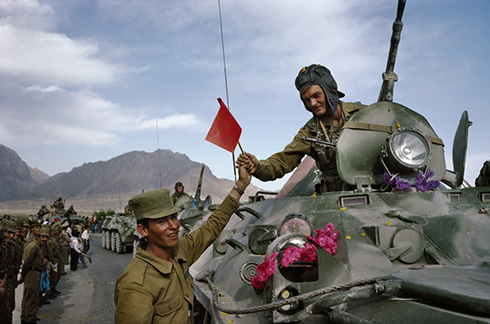 May 1988 – An Afghan soldier hands a flag in solidarity to a departing Soviet solider in Kabul on the first day of the army’s withdrawal from Afghanistan (Photo Credit: Robert Nickelsberg)

Asked what it was like to cover Afghanistan as an American from 1988-2013, award-winning photojournalist Robert Nickelsberg split his experience into two periods —pre-9/11 and post-9/11. “Prior to 9/11… it was okay,” he told an Aspen, CO audience at a recent Fireside Chat & Reception. “We did have to comply with Taliban rules after 1996, in that they didn’t believe in photography and they tried to prohibit it — that made it much more difficult.”

Nickelsberg described the stories behind the photos featured in his book, “Afghanistan: A Distant War,” which chronicles the withdrawal of the Soviet Union from Afghanistan until the secession of American troops in 2013. Working out of New Delhi for TIME magazine, Nickelsberg was one of few photojournalists who had first-hand exposure to the rise of fundamentalist groups in the Afghanistan-Pakistan tribal areas and al Qaeda.

According to Nickelsberg, context is key to understanding the complicated country of Afghanistan. When Nickelsberg landed in central Asia in 1987, it was the end of the Cold War, and he quickly learned that it was essential for anyone working in the region to embrace ambiguity. A moment Nickelsberg captured in May 1988 illustrates this gray area: the photo catches a seemingly pleasant exchange between an Afghan soldier and a departing Soviet solider in Kabul on the first day of the army’s withdrawal from Afghanistan. At this point, the Soviet army had violently killed more than one million Afghans, Nickelsberg pointed out. 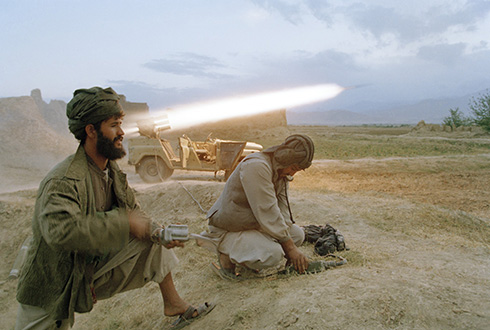 Understanding the historical context of the conflict in Afghanistan — which has been one of the most destructive since World War II — is also essential to understanding the pain the Afghans have endured. In his book, Nickelsberg describes the four phases the Afghan conflict has undergone:

While daily challenges were the norm, Nickelsberg said, making and maintaining good relationships was essential to working in Afghanistan as a Westerner. “[You needed to have] good people around you —someone you could trust, who knew the neighborhoods,” he said. But it could also be testing to work in Pakistan and India, Nickelsberg added, as the three countries are connected by their shared legacy of the British Empire, and the people living there think in these terms.

“We were challenged a lot, but if you had a driver that could tell a good tale about who we were, it worked,” Nickelsberg said, recalling a story about a driver that a comrade at The New York Times had hired. Stopped at an Afghan checkpoint, the driver said, ‘Well, this fellow here, he is a relative of Sir John Major and represents the Queen of England, so you must let him pass.’ “Those people are fully employed all the time,” Nickelsberg reminisced. 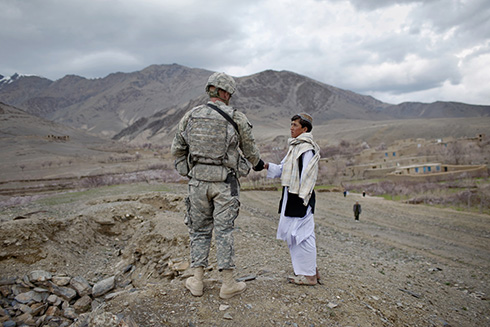 April 2009 – A U.S. soldier shakes the hand of an Afghan youth outside the town of Jalrez in Wardak province (Photo Credit: Robert Nickelsberg)

“So there were challenges every day similar to that, but going back to 1990, when I met Jalaluddin Haqqani, he didn’t care if you were American or not,” Nickelsberg said, recalling a meeting with the mujahedeen commander and pioneer of global jihad. “Today that’s an issue. We are a target. And how do you deal with that? What publication is willing to send you out on that limb right now? Who’s willing to go?”

Having spent 25 years in Afghanistan, Nickelsberg makes the case for a continued US presence in the country.

“It’s my personal opinion that [the Americans] should not withdraw, that we need to stay. This is a crucial area of the world. Many may say what’s the point? But if we’re not there, and we were not there from 1989 to 2001 — there was no US embassy [in Afghanistan] from January 20, 1989 to December 17, 2001—what happened in that period of time?

The gestation of al Qaeda. We had no one on the ground for intelligence, humanitarian issues, visas, nothing. It’s imperative that we remain engaged with this place — watch what happens when we’re not there.”

Zoë Brown is the program coordinator of the Aspen Community Programs at the Aspen Institute.