The Aspen Institute hosted Washington Post columnist David Ignatius in conversation with New York Times Washington correspondent David Sanger to discuss Ignatius’ new book, The Director. Prior to the book talk, we had a chance to ask Ignatius about the release of the Senate Select Intelligence Committee’s report on the CIA’s so-called enhanced interrogation techniques after 9/11.

Aspen Journal of Ideas: What did you think about the Senate Intelligence Committee’s decision to release their report on the CIA’s interrogation program?

David Ignatius: I wasn’t sure that it was wise for the committee to publish the report until I read it, frankly. Last Sunday, I said publicly that questions about safety of Americans were powerful and should be considered. Reading it, I found it so disturbing that it seemed to me suppressing it would be un-American. In a sense, it’s like the issue of torture itself. I don’t think the report is right in saying that torture is never an effective way of getting information. I wish that were true, because then that would make the question easy. No one would ever do something that had no utility.

I think we ban torture precisely because it’s a moral decision, meaning there’s something at risk. A moral action is one that you take even though it may be damaging. I think the same holds for releasing the report. I think that it’s a mistake to argue that it may not damage the United States in the short run. Even so, I think it’s right to release it because it’s consistent with our values. And in the long run what we’ve learned from this period of destabilization since 9/11 is that when we deviate radically from the country that we are, we make real problems for ourselves. So I see releasing the report as part of a long, very bumpy, very dangerous road back to balance and global influence.

I think the report is not a document that an historian would feel proud of. It’s not a 9/11 report. The 9/11 report was balanced, contextual, thoughtful, deliberative. This was the case for the prosecution. In every instance where you could make a negative construction of the evidence, they have chosen to do so. I’m disturbed that so many in the media are taking the assertions that the report makes as if they’re facts. They’re not facts. They’re an argument that’s made in a prosecutorial way.

For example, the there’s a question of whether the information gained from these techniques was ever useful. The committee makes an argument that it wasn’t. They have done that by looking at each of 20 cases they selected and then, in effect, reverse engineering — going back and seeing if you could’ve gotten the information from some other source that was available at the time. They argue that in all those cases, it would’ve been possible. Even if that’s true — and I don’t know if it’s true or not — I don’t know that it’s faithful to the way this unfolded in real time for the analysts. And I have much more confidence in the opinion of Leon Panetta who basically says “You have to be agnostic. It’s not possible to say with confidence that the information that allowed identification of the courier who led them to Abbottabad would’ve been possible without the information they obtained.”

People are trying to short-circuit this issue by saying, “Oh we could’ve gotten Bin Laden anyway.” One of the things we have to be prepared for is the possibility that if we say we will not use these techniques, there’s information that might be very important that we won’t be able to get. And as I said, I think that’s what makes it a moral decision.

Another thing that is really troubling about the report is the way that it gives Congress itself a free ride. To me, as I look back on this story, there are many institutions, many parts of our government that were complicit in what happened. The CIA was, it turns out from reading these pages, totally unprepared for the interrogations, didn’t have the expertise, hired contractors who claimed they knew what they were doing, and drew in people who as we look at them were not appropriate individuals. So obviously they have a lot of the blame. They said at the time, ‘We want to be assured that this is legal. We won’t do it unless you give us written assurance that what you’re asking our officers to do is legal.’ So they went to the Justice Department, and, as we all know, Justice Department lawyers wrote a legal opinion that still makes your hair curl — the way in which it argued that what we now think of as torture wasn’t torture and was legal.

Policymakers ended up approving this. There was an ellipsis in the report, but the report’s argument that President Bush didn’t know anything until 2006 is ludicrous, by his own account in his memoirs. The idea that the committee was credulous about that claim that he didn’t know anything until 2006, I’m flabbergasted by that. And again, it makes me wonder if [the report’s authors] were looking for the worst construction.

Then finally in terms of complicity you have the Congress. I mean the intelligence committee and the senior leadership of Congress. The job of the oversight committees is to oversee the activities of the intelligence agencies. In terms of everybody’s account that I’ve read, the month after the first instance of waterboarding in September 2002, the leadership of the House and Senate intelligence committees and the higher congressional leadership was briefed, and the CIA, using contemporaneous notes, says the briefing was explicit and detailed. Senator Rockefeller pushed back and said it wasn’t so detailed. Let’s take Senator Rockefeller’s view. The job of congressional oversight when you’re not clear on what people are telling you is to say, “Wait a minute, I don’t understand that. What techniques do you mean? Where’s this being done? What are the rules? What are the procedures?” That clearly didn’t happen. I think for Senator Feinstein to give a pass to her colleagues and herself is a real weakness of the report. I’ve called it one glaring omission in the report. 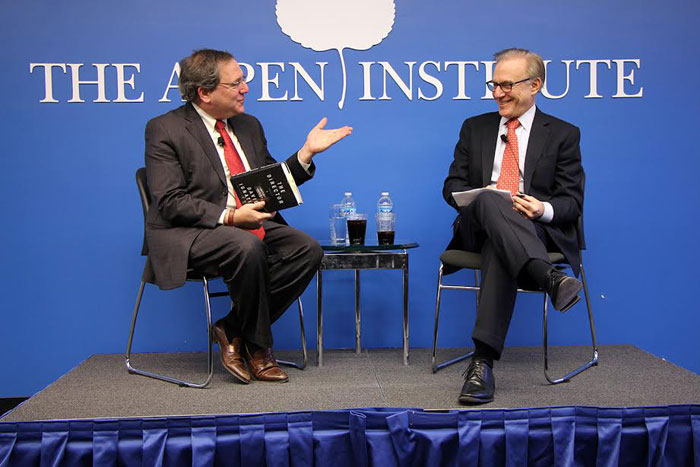 AJI: What will the impact be on America’s foreign policy?

David Sanger: I don’t think much. When you’re all done reading this report, the meta-tale here, we’ve known basically since 2007. Some of the specific details were pretty gruesome, and the tone of the report was not as measured as say the 9/11 report, which I think I would consider sort of the model of how this kind of stuff should be done. They kind of needed the presence they had in the 9/11 report of somebody like the late Ernie May to put this thing into a historical perspective because this isn’t the first time a president facing a historical crisis has gone off and done some things that we might regard as extra-legal or extra-constitutional. That said, I believe the report had to come out for three reasons.

First, the president basically had committed to some kind of process for releasing this information when he ran in 2008.

Second, if it didn’t come out, it was going to leak. And this has become a partisan enough issue that I actually believe Senator Udall when he said he would go down and read it from the protection of the Senate floor. So it was going to happen anyway. Then I think the question was how do you deal with this.

And the third element is: Yes, there will be some propaganda benefits for ISIL and for others, but I don’t think all that great. And I actually think the reaction the past couple days has been more muted than I expected.

DI: I think it’s fair to say that if the videos of waterboarding had survived and not been destroyed, and if those had been made public or had been leaked — and in the world we live in you have to assume that they would’ve been — that could’ve had a much more devastating impact. Those were images that would live forever in the consciousness the way that the Abu Ghraib photographs still do to this day. You’ll never get those images out of your mind whether you’re in Washington or Baghdad or Islamabad.

AJI: Will the foreign policy of the next president be defined by the revelations that have rocked the intelligence world, from the torture report to the NSA spying program and beyond?

DI: I think the issue is a little different. It’ll be some time before CIA officers will undertake activities that they believe are not going to have long-term public support. And I think that’s one of the delicate issues here. You want a CIA where people exercise moral judgment, and they’re prepared to say no, but you want that only up to a certain point. The CIA’s like the military. When people receive an order from their commander to go do something, if the response is “let me talk to my lawyer,” that’s not a good situation. I think the next president will have to worry as President Obama realized he had to worry about the morale. In this world, you need a quality intelligence service.

I think we’ll have to see in the campaign whether the Republican candidate chooses to run hard against the decision of the Obama administration to acquiesce to the publication of this information and to agree to some limits on surveillance following the Snowden revelation. If they decide to say “this is part of Obama’s weakness and disengagement from the way the world really works, and a strong president will have to restore things,” this pendulum is going to start swinging right back.

So I cautiously think these will be issues for the future, but where we’ll be on the spectrum is hard to predict right now.

DS: I think David’s just right on the pendulum metaphor. My suspicious is that by the time the campaign comes along, there will be far more urgent issues than whether the president should’ve allowed publication [of this report]. But on the NSA surveillance side, I think it will be very difficult for any candidate, Republican or Democrat, to argue for more intrusion into bulk collection of Americans’ data, as opposed to that of foreigners. And the evidence for that is this issue is where Nancy Pelosi and Rand Paul meet.

DI: If the world continues happily, and there’s no evidence you can point to that Americans paid a severe price for the changes in surveillance policy, I think there’s no question that people will say these new policies are great, we’re living up to the Founders’ ideals. But if you have a situation where AQAP [Al Qaida in the Arabian Peninsula] phones somebody in the United States and this is a sleeper agent who sets off a bomb in New York City, and it turns out that the metadata that allows us to know who is calling isn’t kept anymore, people are going to go nuts. So I think that’s the problem: Making sure you have a system in place that you could comfortably defend to the American people regardless of what happened. That’s the key to getting this right. It’s making sure that you can tell the country, “we did our best to protect people and guarantee their civil liberties.” And I think that is what the president and the White House are really struggling with.