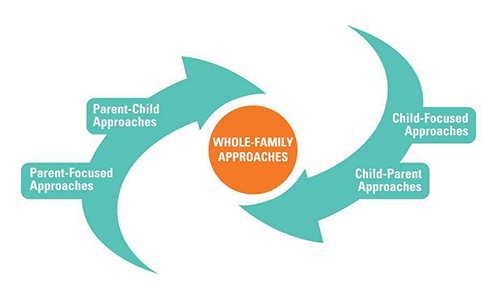 Two-generation approaches can be found along a continuum. This graphic illustrates the starting point (parent or child) and the relative emphasis.

As we acknowledge the 50th anniversary of President Lyndon B. Johnson’s “War on Poverty,” we have much work to do to eradicate income inequality in the US. Ascend at the Aspen Institute is working on solving this pressing issue using a two-generation approach.

These words from a low-income Richmond, Virginia, mother echo a sentiment we heard over and over again in a series of focus groups Ascend at the Aspen Institute conducted this summer called Voices for Two-Generation Success. The bipartisan focus groups with low and moderate-income mothers and teenagers across race and ethnicity in Richmond; Denver, Colorado; and Chicago, Illinois; captured the aspirations and challenges two generations — parents and children — face as they seek better lives. They provide powerful insights into low-income mothers’ fierce resilience, which is coupled with a growing anxiety about how to achieve stability, independence, and opportunity for themselves and their children in a country with an ever-widening opportunity divide.

Or this mother, a low-income Asian-American, from Chicago: “I think my challenge is more just to be financially stable in the long run, be able for her to go to college.”

Mothers — and fathers, with whom we spoke in earlier focus groups — want to succeed for their families. “Your dreams become primarily about your children,” one mother from Richmond told us. “Everything that you do and everything that you strive for — it’s about you having to be that strong person to lead your children in the right way, so that they don’t have those shortcomings that you had, or some of the leadership that you didn’t have, or that you had but you overlooked.”

These are the voices Ascend at the Aspen Institute keeps front and center as we develop solutions that provide opportunities for and meet the needs of children and their parents together. These “two-generation approaches” work with children and their parents simultaneously to harness the family’s full potential and put them on a path to permanent economic security. Despite political gridlock and budget constraints, most leaders share a common goal: we all want to see families thrive. And yet fragmented approaches that address the needs of children and their parents separately often leave either the child or parent behind, thereby dimming each family’s chance at success. When we design programs and policies with the whole family’s educational and economic future in mind, opportunity becomes a family tradition.

The good news is that there are pioneering leaders listening to parents’ voices and implementing cutting-edge two-generation approaches across the country. Twenty visionary Ascend Fellows — from state government and research organizations to early childhood development and postsecondary education institutions — are using Ascend’s platform for innovation and collaboration to deepen two-generation strategies that move families toward opportunities.

Take, for example, Ascend Fellow Reggie Bicha, the executive director of the Colorado Department of Human Services. Reggie partnered with Ascend Fellow Andrea Levere — president of the Corporation for Enterprise Development (CFED), a Washington, DC-based asset-building and financial services policy organization — to develop a blueprint for children’s savings accounts (CSAs) in Colorado. They hope to demonstrate that large-scale state-run systems, such as Head Start programs, Temporary Assistance for Needy Families, and workforce programs, can deliver CSAs to improve outcomes for both children and parents. At age 18, the savings in CSAs are used for financing higher education, starting a small business, or buying a home. This collaboration is transforming state human services systems.

Then there is Ascend Fellow Rev. Vivian Nixon, who runs the New York-based College & Community Fellowship. With her team, Rev. Nixon is developing child-focused programming for previously incarcerated mothers and their families, showing other organizations what is possible. Farther south, in Philadelphia, Ascend Fellow Dr. Mario Small is building on his nationally recognized work on the importance of trusted relationships to foster economic stability for low-income urban mothers and their children. Collaborating with Ascend Fellows Dr. P. Lindsay Chase-Lansdale and Henry Wilde of Acelero Learning, Dr. Small is designing and testing a new social capital model for low-income families in Acelero Learning’s network of Head Start centers. Their work has the potential to improve school attendance, and children’s academic success.

As we look forward to 2014, two-generation strategies are gaining momentum. They reflect the voices of families and are fueled by the innovations the Ascend Fellows are advancing in their fields. At Ascend at the Aspen Institute, we see this as the year to invest in early childhood development as a gateway to family success, complementing that with a strong focus on postsecondary education. We will delve deeper into understanding the power of social capital in order to capture metrics and models other communities can replicate. Throughout, we will remain committed to listening to families and resolute in our goal to create new opportunities for children and their parents to build economic security together.

Video: From Two Generations to One: Employment Pathways for Young Parents