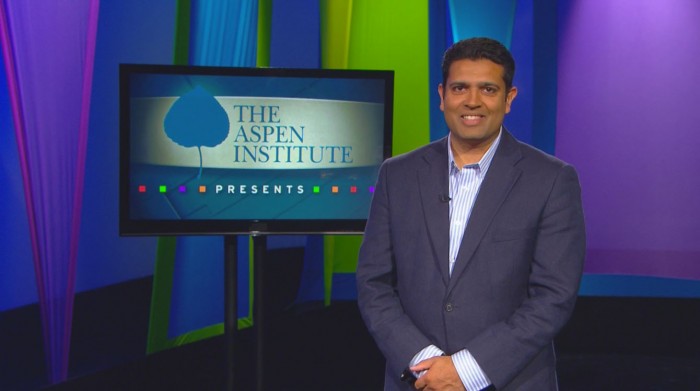 Whether or not you can make it to the Aspen Ideas Festival, you can catch the often-provocative, yet noticeably civil discourse from the weeklong event in a variety of ways. One of the most exciting is the second season of the TV series, Aspen Institute Presents.

Transmitting directly from the Festival, this five-part series is produced exclusively for public television’s WORLD Channel and hosted by PBS NewsHour’sand BBC’s Jon Stewart. The broadcasts will be captured, edited and fed within a day of each presentation, and will air June 27 through July 3. In addition, regular national video alerts will highlight the day’s debates, interviews and revelations throughout the week-long Festival.

Episodes will include themes ranging from People and Politics to Reinventing Television to the State of the American Economy to the Privacy, Safety, and the Law. Each program will feature numerous experts representing diverse perspectives, including former Congresswoman Jane Harman, political strategist and commentator Karl Rove, the Washington Post’s Michael Gerson, New Orleans’ Mayor Mitch Landrieu, Huffington Post’s Arianna Huffington, and Goldman Sachs Chairman and CEO Lloyd Blankfein, among others.

In advance of Aspen Institute Presents Season Two, watch the promo. Come back to the same link to watch the episodes beginning June 27.

WORLD is distributed by American Public Television (APT) and is available to more than half of American TV households, including New York, Los Angeles, Chicago, Philadelphia, San Francisco, Dallas, Boston and Atlanta. WORLD features nonfiction content including PBS signature series, FRONTLINE, Nature, P.O.V. and Independent Lens, as well as original co-productions like Global Voices, America ReFramed and The Aspen Institute Presents. Funding for the WORLD channel is provided by the Corporation for Public Broadcasting.