The Aspen Initiative on Financial Security held its fourth annual Financial Security Summit in July in Aspen, Colorado. This is the third in a series of seven posts describing each Summit session. Links to the other posts and an overview of the Summit can be found here.

The second panel at the Summit focused on the changing nature of work and the roles of the government and employers in mitigating these labor market challenges. The panel featured Katherine Newman, Provost at the University of Massachusetts-Amherst; Aparna Mathur, Senior Fellow at the American Enterprise Institute; Bill Spriggs, Chief Economist of the AFL-CIO; Lata Reddy, Vice President of Corporate Social Responsibility at Prudential Financial and President of the Prudential Foundation; and Noel Poyo, Executive Director of the National Association for Latino Community Asset Builders (NALCAB); and was moderated by Maureen Conway, Executive Director of the Economic Opportunity Program at the Aspen Institute. The panelists identified stagnant wages, declining benefits in part-time and contingent work, and the lack of employment opportunities in minority communities as significant challenges to achieving financial security. 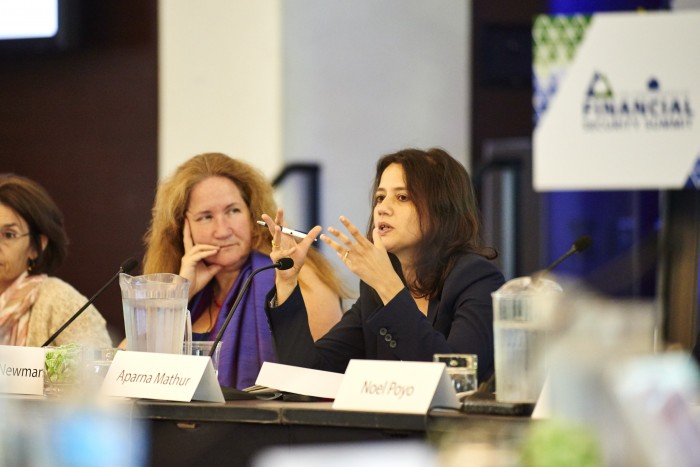 Maureen Conway began by describing recent labor trends, including stagnant wages and growth of the sharing economy. Workplace difficulties for Millenials are especially worrying, because they are “the canary in the coal mine” that predict broader labor trends going forward. Katherine Newman highlighted the mismatch between the demand for middle-skill jobs, and the lack of resources to train for these jobs. “We have a very badly broken training system for this kind of job. We are being put to shame by countries like Germany, Austria, and even the United Kingdom, who’ve invested a lot more in technical training,” said Newman. Lack of investment in community colleges creates a “big risk shift to households to finance higher education,” many of which are unable to do so. Newman also linked the “precarity” of current jobs to retirement security. “The absolute degradation of retirement benefits is precisely in those jobs that have become much more contingent than they once were,” said Newman.

Aparna Mathur discussed some troubling labor trends hiding behind the statistics. Although the unemployment rate is declining, labor force participation is low and millions of people are underemployed. Unlike Newman, Mathur said that contingent work is “a positive trend,” pointing out the opportunities in the sharing economy for people to supplement their incomes. Although the contingent economy helps fill income gaps, Mathur asserted that people need more incentives to experiment and start new businesses.

Bill Spriggs then discussed broader labor market trends that endanger financial security. Since 2000, wages have been flat for all skill levels, and the share of total national income going to labor has declined significantly. Even those with higher education are stuck in low-wage jobs because of slack in the labor market. Declining wages and high unemployment for certain sectors of the population make it impossible for people to balance short- and long-term needs; it is hard to “ask people to save when that means they will be living below the poverty line for their entire life.” Spriggs was also skeptical of the “gig” economy, noting that wages are often very low, benefits non-existent, and worker protections lacking.

Lata Reddy offered some optimistic news for the contingent economy sector. The Freelancer’s Union is starting to provide retirement benefits for contingent workers. Reddy identified this initiative as a step in the right direction, in a time when “arm’s-length” employment has shifted more risk to workers. Although unionization is a positive development, low 401(k) contributions from freelancers indicate that we need products that better meet the needs of contingent workers. Noel Poyo echoed the need for more investment in small businesses, especially in minority communities. He asserted that mainstream institutions are not investing enough in communities of color, often because of misunderstood risks. “The economy is not serving Black and Latino youth,” Poyo said, “There is so much potential there.” In terms of policy, Poyo appealed for federal investment in workforce training, adjustments to current training programs, and more private investments in minority businesses.

In the discussion that followed, participants examined the role of government in supplementing declining work benefits and the pros and cons of the contingent economy. Josh Barro asked if greater government support is “a necessary consequence” of the disconnected job market. Spriggs asserted that we need to increase public spending to help meet workers’ needs, while Mathur countered that the gig economy puts less pressure on the government to fill in the gaps as workers use part-time options to supplement income. Bob Weinberger noted that the shift from “corporate paternalism” toward greater individual risk and responsibility requires an additional public policy response. Sarah Wartell suggested that pooled benefits for contingent workers has the potential to share risk and lower costs. “As long as contingency is happening, why not protect workers within that trend?” said Wartell.

Watch the video footage from this session here.