In 1860, as this nation stood on the brink of civil war, President Abraham Lincoln implored Americans and their political leaders to think of “the better angels of our nature,” before committing totally to the dissolution of the Union.

To plea for civility during one of the most bitter and divisive periods of American history was an attempt to call on a cultural tenet of respect for those with whom you disagree. The value of civility was a necessary component of our culture at our founding because we are a union of different states, then led by people with different ideas of how a federal state should look, but all committed to the idea of the freedom of belief and expression. Such an entity created by people holding divergent views cannot exist without basic elements of civility and respect for your fellow politicians and citizens. We learned early on to disagree agreeably.

Today, things are different. We have witnessed a substantial erosion of civility in political discourse in contemporary politics. In my view, the end of civility in our political system is a true loss for every American, Republican and Democrat alike.

President Bill Clinton once said that, “When people feel uncertain, they’d rather have someone who is strong and wrong than someone who is weak and right.” It looks like that is happening in America right now. 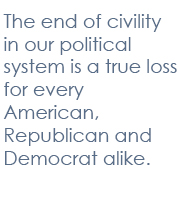 The state of contemporary politics is one in which bombast is met with approval. Extreme viewpoints are greeted with appreciative nods by a disturbingly large segment of the American electorate, and so the incentive for political leaders to make such comments is significant. Of course, there have always been and will always be people in a free and democratic country such as this who hold views that are extreme or unpopular, and it is their right to do so. But in this country politicians weren’t always so easily able to accrue benefit from being egomaniacal, indecent, uncivil, and frankly just plain rude.

In 2007, I remember watching a town hall meeting held by then GOP presidential candidate John McCain, in which he argued with a voter who made outrageous claims about then Sen. Barack Obama’s citizenship and religious beliefs. I remember him being booed by some of the people in that audience for simply saying, “President Obama is a citizen and a family man, but I disagree with him about many things and that is why I want to be president.” McCain’s response was a class act.

But after watching Donald Trump during much of the campaign and several other candidates, I am wondering if common manners, decency, and civility are values that we take seriously in politics or in society itself for that matter. That people often respond to brashness and self-promotion or regard jumped-up schoolyard bullying and direct ad hominem attacks as qualities of leadership is deeply disturbing to me not just as a former politician but as an American.

Trump, of course, looms large when discussing the lack of civility in public dialogue, but he is not alone in this trend. Numerous other politicians on all sides are far too willing to cast aspersions, make threats, or otherwise fan the flames of hatred and mistrust. In this uncivil process we ignore substantive issues facing actual people in favor of negativity and bitterness. The political rewards for uncivil behavior may give candidates a bump in the polls or increase their fundraising, but the cumulative damage such actions are doing to this country by normalizing those behaviors is astounding.

There are elements of our society charged with keeping things civil, but they are not taking strong enough action on that front. All the world’s great religions have elevated the Golden Rule, that we should do unto others as we would wish done unto us. So, where is the religious community on the sad state of public dialogue in America? Have values of humility and decency gone completely AWOL from our modern society? The prophet Micah speaks of the need to “do justice, love mercy, and walk HUMBLY with thy God.”

I realize that politics isn’t beanbag and debates on important issues can and should have an edge. But what we have today goes beyond an edge. This country is crying out for solutions to our myriad problems but our culture often rewards meanness, division, and incivility. The emphasis on the latter makes the former all that much more difficult to achieve. People feel legitimate frustration and anxiety about what economic, social, and other forces of modernity are going to do to their lives and what kind of future will exist for their children. But a pluralistic democracy cannot deal with these problems and thrive when cultural norms of basic decency no longer exist. Lincoln’s words have real meaning, and I hope our political leaders will try to appeal to the better angels of our nature, and their own.