As a result of historic moves to normalization by Presidents Barack Obama and Raul Castro, the Cuba of today is no longer your father’s Cuba of Fidel Castro. It is not the free enterprise democracy of the American ideal either. But, it is much closer to the latter than is generally understood in this country.

Raul Castro, upon assuming the presidency of Cuba in 2008 (after becoming acting president in 2006), declared he would continue the policies of his brother Fidel. But he set in motion a process for massive change, the fruits of which are apparent in the increasingly privatized and diversified Cuban economy. And, important for the context in the current process of normalization, the government was already deep into privatizing the Cuban economy years before the December 2014 thaw.

As one Cuban said to me: “We have been changing since 1993 — not since we are friends with the Americans but since the fall of the Soviet Union.”

A group of high-achieving young professionals recently returned from a week of meetings in Cuba, in a visit cosponsored by the Aspen Institute and the Richardson Center for Global Engagement. The group of almost two dozen met with Cuban academics, entrepreneurs, and people on the street. 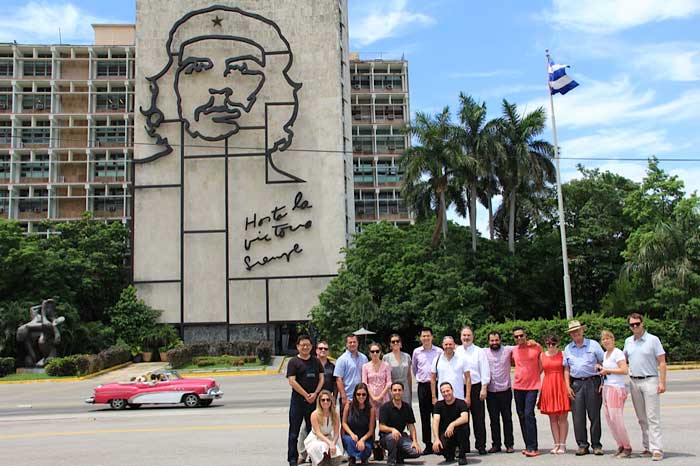 Cuban and American attendees of the Richardson Center/Aspen Institute workshop.

The goal was to establish people-to-people contacts that might create opportunities for participation in and development of various sectors of the Cuban economy. We also sought to learn ways to improve communication and understanding between Cubans and Americans generally.

Rafael Betancourt, consulting economist and professor at the University of Havana, shared with the group the recent economic history of Cuba. He emphasized that Cuba had started privatizing its economy many years ago. Betancourt went on to describe Raul Castro’s “Roadmap to Reform,” which included more than 300 strategies. The “Roadmap” was taken to a huge popular discussion around the country, resulting in changes to 38 of the items.

Prominent in the reforms were mechanisms for ceding control of economic enterprises to worker-governed cooperatives and allowing individually-owned private enterprises. In the past the government controlled virtually all production enterprises, but in a myriad of individual state-run entities, not as a single government colossus.

The co-op movement was initially big in the agriculture sector, where co=ops were responsible for 84 percent of food production as of 2012. Co-ops were also permitted in manufacturing and other sectors of the economy. Nearly 500 co-ops had been approved by the end of last year.

Those trends continued and accelerated in 2014 and this year. There are 483,000 self-employed Cubans today, Betancourt said, noting that at least 10 percent of them still hold a state job in addition to their private employment. Workers in some co-ops make three to four times what they made as state employees. Private enterprise workers — even waiters in private restaurants — generally make more than professionals on the government’s payroll. Clearly the Cuban private sector has a momentum that will not be turned back.

Even the state-owned enterprises have been granted greater autonomy — together with new leeway to thrive or to fail and fold.

A 2014 foreign investment law opened all sectors of the economy to international participation, but the U.S. embargo makes it an extremely risky proposition. The government has granted concessions for offshore oil exploration. Clearly the embargo will act to limit American enterprises to the benefit of foreign competitors as long as it persists while Cuba continues to engage with the rest of the world.

Cubans privately own 85 percent of the homes, and they are free to buy and sell them. Significant segments of the workforce already have regular access to the Internet, with planning proceeding on how to extend it to all households in Cuba. The mandate that it must be universal without regard to financial circumstances is one of the impediments to a swifter implementation.

Through it all, Cubans remain focused on providing a safety net of food and housing for all people. A market economy that still maintains socialism’s care for the people is the ultimate goal.

“After 50 years of revolution, we have not been able to produce an equal society — and I don’t know if we ever will,” Betancourt observed. But clearly concern for the less fortunate will remain a dominant policy.

Discussions among the Aspen Institute-Richardson Center professionals bounced around among ideas for joint ventures and for ways to help. Enthusiastic approval of Cuban culture and cuisine (and rum) was universal.

The group came away with a sense that the Cuban people are a proud and patriotic people. While one might get the sense that many younger Cubans found the revolutionary fervor of 50 years ago to be somewhat passé, there was no apparent frustration with government restrictions or policies. While there was real enthusiasm about the possibility of closer people-to-people relations with the United States, Cubans tend to approach the change on their terms, rather than as recipients of some favor from America.

But a dominant reality for Americans to recognize is that Cuba is on the move — economically, socially, artistically — and in participation in the world community. American policymakers need to come to grips with this and make the adjustments necessary to allow the full potential of U.S.-Cuba relations to bloom.

Bill Hume is a board member of the Richardson Center for Global Engagement and served as director of policy and issues in the office of Governor of New Mexico.