On Sunday, October 16 Dirk Whitebreast completed the final marathon in his 262 mile run in an effort to raise awareness to suicide prevention in Indian Country and the work being done at the Center for Native American Youth. Dirk embarked on his journey of completing 10 marathons in 30 days on September 17 at the North Face Endurance Challenge Marathon in Madison, WI, and crossed the last finish line at the IMT Des Moines Marathon this past weekend. Since his first race, Dirk and the Center have received an overwhelming amount of support from tribal leaders, Native youth groups, tribal universities and colleges, and communities across Indian Country. 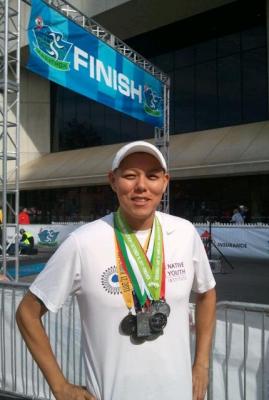 Dirk has shared his inspirational story with youth, reporters, Native American radio shows, and students from Haskell University and Marquette University. Dirk Whitebreast has most recently accepted Senator Dorgan’s invitation to join the Center’s board of advisors, and the Center’s staff looks forward to continuing to work with Dirk to share his experience and raise awareness to suicide prevention for Native Americans.

Dirk serves as an incredible leader for his tribe and a positive role model for young Native Americans. The Center is honored to have Dirk join our team. Thank you to all those involved in supporting Dirk’s Run! Stay tuned for updates about the Center’s continued work with Dirk.

Please click on the links below to read the articles about Dirk’s Run: