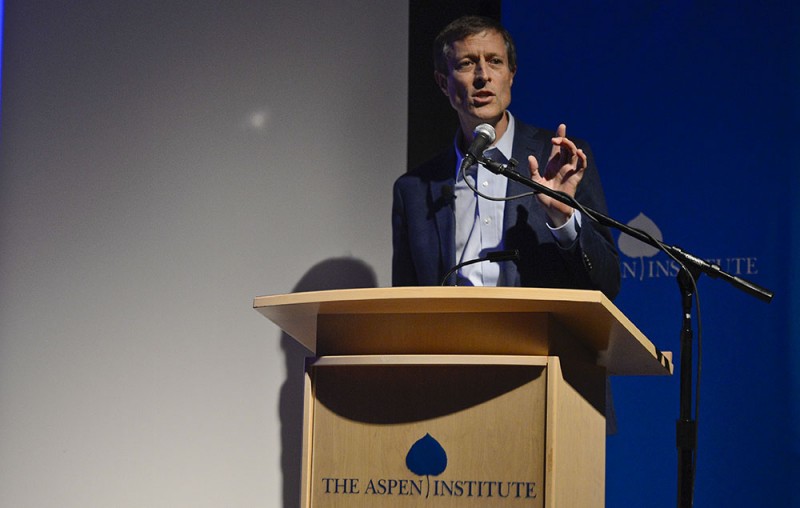 An estimated 2 percent of American adults are vegetarian or vegan, and one-third of those who have lived this lifestyle in the past are interested in resuming it. But when it comes to health benefits, does the vegan diet really live up to all the hype? At a recent Murdock Mind, Body, Spirit series discussion in Aspen, CO, Dr. Neal Barnard, founding president of the Physicians Committee for Responsible Medicine, made a convincing argument for the physical and mental benefits — and the potentially life-saving aspects — of a vegan diet.

Citing study after study, his own research, and other evidence, Barnard, the author of 17 books, also shared his own personal wake-up call to a healthier way of life, which came when his father died with severe dementia. His father, who had been a cattle rancher like his grandfather and others before him, switched to a career in medicine and became a diabetes expert in Fargo, ND. But diabetes was always a disease that was at best managed, and was progressive, Barnard recalled.

When you’re not eating dairy and dairy fats, the inflammatory process in your joints goes away.” – Dr. Neal Bernard

“I never heard my father say anyone got better,” he said, adding that his father’s mind eventually started to go on top of that, like his grandfather’s had. “I realized I had never heard of any way of preventing it.”

Diabetes cases increasing in the US

Further research showed Barnard that the incidence of diabetes has been getting a lot worse in the United States, affecting about one-quarter of the population now. Barnard correlates that with Americans’ heavy meat- and fat-based diet. Meat intake started rising at the end of World War II and reached an all-time high in 2004, when the average American ate more than 201 pounds of it. At the same time, cheese, which is 70 percent fat, went from being “a European thing” to an American staple — average cheese consumption went from 3.8 pounds per capita in 1909 to 33.5 pounds in 2012, perhaps because it’s now on the list of a lot of Americans’ favorite foods.

“Pizza is just a delivery vehicle for cheese,” Barnard noted. “If it were any worse, it would be Vaseline.”

Along with an increase in sugar intake, “you cannot exercise all that [sugar and fat] off,” he said. “The reason for obesity and all of that stuff is that humans are eating in a way they have never eaten before.”

Barnard cited a National Institutes of Health-funded study he conducted on 99 people who were not in good physical health. He shared success stories of individuals who, after eating a vegan diet over a period of 22 weeks, lost a lot of weight, were able to go off their diabetes medication, and even saw their arthritis improved, because, “when you’re not eating dairy and dairy fats, the inflammatory process in your joints goes away,” he said.

The science, and dangers, of a fat-based diet

Barnard explained the science of it. When fat (whether from animal sources or not, but animal products tend to be the largest sources of saturated fats) builds up in one’s cells, it inhibits the insulin, which acts like a key to allow the sugars to come in and power the muscles. So low-fat diets can eliminate the insulin blockages. In the brain, fat creates blockages too. Saturated fats and trans fats seem to increase the production of a damaging protein that tends to form what look like meatballs in the brain, impeding its connections — a hallmark of Alzheimer’s disease.

Barnard cited a study that showed that the people who ate the most saturated fat had three times the risk of Alzheimer’s. A similar study made the same correlation between fat intake and mild cognitive impairment; on the other hand, avoiding the bad fat cuts your potential to develop memory impairment by 80 percent.

Near the end of his talk, Barnard switched from giving bad news to offering tips on how to lead a healthier lifestyle. Noting that people who drink wine moderately tend to be healthier, he said that part of the reason for that is the antioxidants in brightly colored grapes. So choosing colorful foods such as blueberries and carrots and spinach is wise, because “the human retina has evolved over time to recognize the antioxidants in them and say, ‘I want that.’”

Physical activity and mental activity are also key to delaying cognitive decline, he said, particularly speaking another language or anything that has to do with exercising one’s word machinery, such as word games.

But the most important thing is to actually stop the brain, and go to sleep, Barnard said, pointing to a slide that showed a clock at the 10 pm position. The brain, he explained, is like a bunch of file folders, so if all the information accumulated during the day doesn’t have the chance to be filed away, “your memory will be poor and your emotional control will be poor.”

Any of these habits can be eased into gradually, Barnard said. For example, oatmeal can be made palatable by adding cinnamon and raisins; or perhaps try a veggie pizza. A three-week trial run of a vegan diet might seem harsh the first week, but by the end of it a double-bacon cheeseburger won’t taste so good.

And Barnard was optimistic that Americans can make healthier choices, pointing to the severe decline in smoking over the past few decades and even a decline in meat consumption since 2004. The main challenges to this are promotion and the use of bad science by the meat and dairy industries, he warned. But by emphasizing proper nutrition and widespread education — bringing nutrition into medical education and care, schools, and business settings, for example — the battle can be won.

“The way to do this is to have fun with it,” he concluded. “And if we have fun and we make some noise, we can revolutionize the health of this country.”