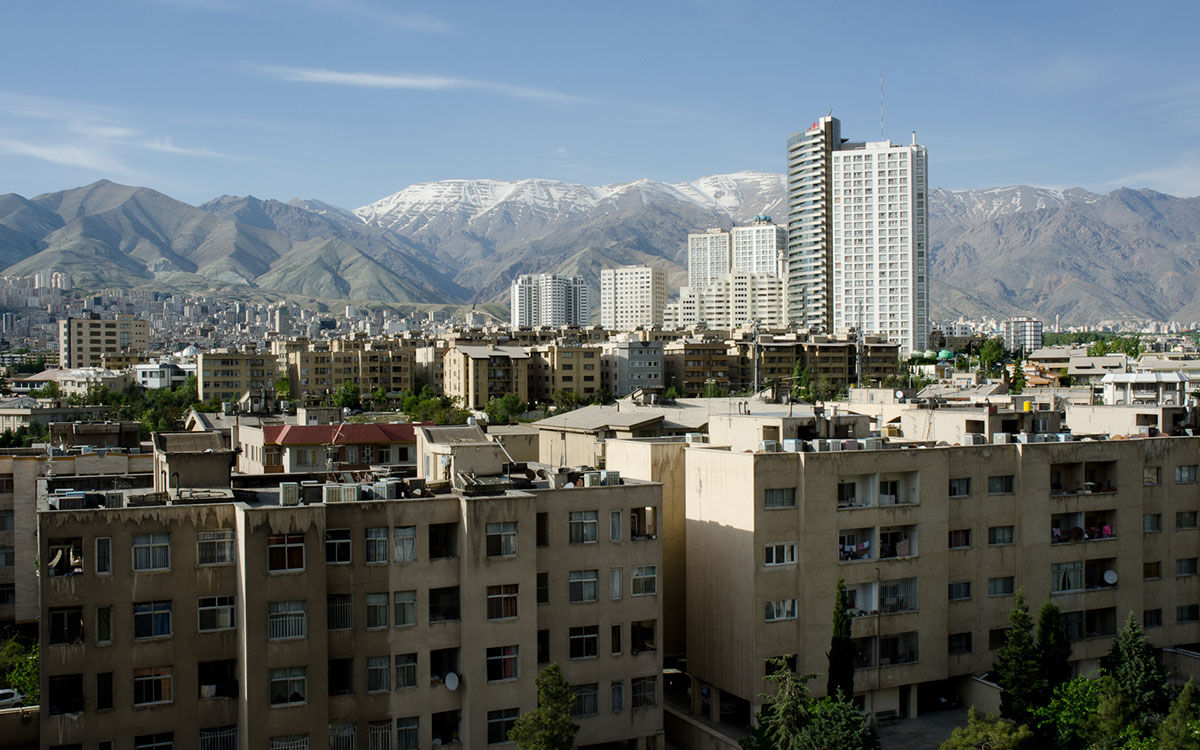 Tehran and its mountains. From Flickr user Kalmar Adl

Debate over the merits of the nuclear deal and Iranian actions in the Middle East continues to divide Washington. Seemingly any event involving Iran is spun by political opponents as either a sign that Iran is willing to engage more cooperatively with the U.S. or that an arrogant Iran is being increasingly aggressive while the U.S. stands idly by. For example, when ten U.S. sailors were detained briefly on January 12 and released the following day (after being displayed on Iranian state television), Secretary of State John Kerry praised Iran’s cooperation in the prompt release of the sailors, saying “we can all imagine how a similar situation might have played out three or four years ago.” Meanwhile, Senator John McCain called the situation a case of unchecked Iranian aggression, arguing that the Obama administration’s “craven desire to preserve the dangerous Iranian nuclear deal at all costs evidently knows no limit.”

The truth is, there is enough evidence coming from the political elite of Iran to justify either narrative, allowing optimists and cynics to continue talking past each other. Deep divisions remain between the pragmatists in the Iranian executive branch and hardliners who have power bases in the Islamic Revolutionary Guards Corps (IRGC) and the parliament (or Majlis). That divide means that any argument about Iran’s intentions hinges on conflicting answers to an essential question: What is Iranian foreign policy? The question, as with most questions of Iranian politics, defies a simple answer.

2016 has already highlighted the political struggle within Iran. The battle for the heart of power will only intensify with the February 26 elections for the Majlis and Assembly of Experts (which will officially select the new Supreme Leader should Ali Khamenei die in the next eight years). Fresh off the success of implementing a nuclear deal which includes substantial sanction relief (formally known as implementing the Joint Comprehensive Plan of Action or JCPOA), the government of President Hassan Rouhani has worked to protect his pragmatist government’s signature achievement.

But the year began with a crisis that threatened to derail that progress. On January 2, Saudi Arabia executed secessionist pro-Iranian Shiite cleric Nimr al-Nimr on disputed terrorism charges. Naturally, hardliners in Iran were enraged, and mobs of protesters attacked Saudi diplomatic buildings, most notably the embassy in Tehran. This in turn prompted Saudi Arabia to cut off diplomatic and trade ties with Iran, and Saudi allies like Bahrain, Kuwait, Qatar, and the United Arab Emirates took diplomatic measures against Tehran as well.

The already volatile cold war with Saudi Arabia threatens to boil over and jeopardize the full re-entry of Iran into the world economy.

The already volatile cold war with Saudi Arabia — which mostly involves proxy wars against Iran in Yemen and Syria — threatens to boil over and jeopardize the full re-entry of Iran into the world economy. Having fought so hard against domestic and external foes to conclude the nuclear deal, the Rouhani government does not want hardline provocateurs at home preventing the payoff from being realized by alienating nations that could play a role in Iran’s economic recovery. Thus, while still expressing rhetorical condemnation of Saudi Arabia, Rouhani has insisted upon a fully legal response. In remarks before the Majlis, he called out voices in Saudi Arabia, Israel and the U.S. who had opposed the deal while also condemning those at home who denigrated Iran’s image by attacking the Saudi embassy. “Diplomatic buildings and guests have immunity from a legal and international perspective, and attacking such locations in our country is against law and religion and an attack on the reputation of the Islamic Republic of Iran,” he said, urging that the dozens detained after attacking the embassy have their trials accelerated due to the seriousness of their actions.

This is not the only example of the Rouhani government acting decisively to reduce tension in 2016. When the IRGC seized those ten U.S. sailors, Foreign Minister Mohammad Javad Zarif — who had also written a New York Times op-ed laying out Iran’s case in the dispute with Saudi Arabia — actively promoted a resolution to the crisis with Kerry. Zarif tweeted upon their release, “Happy to see dialog and respect, not threats and impetuousness, swiftly resolved the sailors episode.” While the necessity and even the legality of detaining the sailors at all was questionable, and displaying them on Iranian TV was at best distasteful, in relative terms this resolution represents a vast improvement over the similar detention of 15 British sailors in 2007, which took two weeks to resolve. Further, the conclusion of the lengthy prisoner swap that freed five Americans held in Iran, most notably Washington Post correspondent Jason Rezaian, was a victory for those in Iran who wanted to demonstrate diplomatic progress.

While these developments on their own are helpful to understand the future of Iranian interaction with the world, the domestic political scene is just as important. With parliamentary elections looming, pragmatists and reformists — who are outnumbered by the conservative ‘Principalists’ in the body — are especially eager to preserve the economic relief promised by the JCPOA. Rouhani’s key campaign issue was economic recovery through sanctions removal, so reckless actions by hardliners which jeopardize that goal would be not only be an election-eve embarrassment, but would undermine the raison d’être of his presidency.

There is no doubt that some would like to undermine the outward-looking economic policies of the Rouhani government. By putting trade and investment at the top of the agenda for his trip to France and Italy in late January, Rouhani made himself a target for political opponents more hostile to the West. The oil ministry is in the process of rolling out new terms for foreign energy firms, giving them a far better deal than the pre-sanction buyback contracts. While these favorable numbers are designed to spur much-needed investment in the Iranian oil industry, hardliners say the terms give away too much control over Iran’s sovereign resources and dozens reportedly protested outside the oil ministry in January. This is hardly surprising given Iran’s history of fierce resource nationalism with roots extending back to the dispute with the Anglo-Iranian Oil Company in the early 1950s.

More alarming to observers in the U.S. are actions that could be seen as provocations aimed at Washington.

More alarming to observers in the U.S. are actions that could be seen as provocations aimed at Washington. In late December, an Iranian ship fired a rocket in the vicinity of (but not targeting) American and French naval vessels. The prisoner swap was nearly scuttled at the last minute as security authorities held Rezaian’s wife and mother at the airport as they attempted to leave Iran with him, and Iranian-American Siamak Namazi remains imprisoned in Iran after being mysteriously arrested in October. And in late January, Khamenei bestowed medals on the IRGC officers who intercepted and detained the U.S. sailors, not exactly a typical response to a misunderstanding emanating from navigational errors. These actions, all instigated by agencies beyond the authority of Rouhani, show that hardline elements retain a good deal of influence within Iran’s political structure.

Yet, perhaps most importantly, none of these provocations has been sizeable enough to jeopardize Rouhani’s signature achievement of the nuclear deal. Yes, Khamenei has continued to needle the West and pepper his rhetoric with anti-American statements, for example warning in a January statement against “deceptions and breaches of promises by arrogant governments — in particular America.” But it seems that, at least for now, the redlines of Khamenei are clear given his tacit support for the nuclear deal (his endorsement of Rouhani’s election itself was a de facto pledge of support for a serious attempt at diplomacy), and discontents within the government or military will have to avoid undermining JCPOA.

In recent years, the conventional wisdom has developed that in the context of the nuclear negotiations at least, the conservative political establishment dictates foreign policy in Tehran, despite the pragmatic approach of the Rouhani government. While the public skepticism emerging from the Supreme Leader’s office has justified this analysis even as he gave approval to the nuclear deal, a subtler reading indicates the possibility of a shift in the Islamic Republic’s approach. Most notably, Khamenei echoed Rouhani’s condemnation of the storming of the Saudi Embassy; further, the quick release of the sailors would not have been possible without the Supreme Leader’s approval. If the prisoner swap is any indication, the push for diplomacy seems to be affecting judicial matters which are usually off limits to interference by pragmatists in the executive branch. While his public rhetoric remains fiery, Khamenei’s actions appear to signal that he believes Iran has a great deal to lose from antagonizing other nations, including the U.S. and its allies.

The February 26 elections for the two assemblies are unlikely to derail Rouhani’s diplomatic and economic agenda. But they are likely to tell the world about the direction of political currents in Iran. A strong showing for centrist or even reformist candidates would add further momentum to the trend toward pragmatic international relations, but this prospect has already been weakened by the Guardian Council. In its vetting process, the conservative clerical body rejected 7,300 candidates (out of nearly 12,000) deemed to be insufficiently religious, loyal, or otherwise qualified, with a reported 99 percent of reformist candidates rejected, prompting vehement protest from Rouhani. Despite the reinstatement of 1,500 candidates on appeal, the drastic vetting is a reminder that those looking for a wide-reaching change in Iran’s political system should temper their expectations. A victory for more moderate and pragmatic candidates despite this handicap could mean a smoother implementation of economic reforms and a greater mandate for diplomacy — unless the success of the moderates is overwhelming and provokes a hardliner backlash like the one that crippled the reformist parliament of 2000-2004.

If hardliners win a decisive victory, it will further confirm that fundamental liberalization is not imminent for Iran. Such a victory might hint at more clashes with U.S. interests and allies in the coming years. But with so much economically at stake, a beleaguered Iran only taking its first steps back into the global marketplace is unlikely to take major provocative actions in the near future. For now, the elections will be a fascinating gauge on long-term trends. Regardless of their outcome, Washington should watch these elections to understand what can be accomplished in this era of limited — but still unprecedented — cooperation from Tehran.

Mehrun Etebari serves as policy lead for geopolitics at Securing America’s Future Energy’s (SAFE). The opinions in this piece are his own.