Upon the news that New York City has acquired what will become the final section of the High Line from CSX Transportation for development, it seems fitting that we take a look back at High Line architect Elizabeth Diller’s discussion at the Institute’s Ideas Festival earlier this summer. 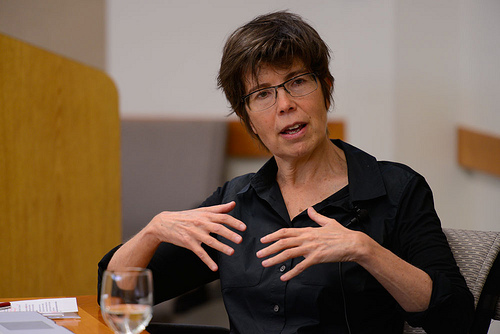 On a panel called “Reimagining Space,” which Diller shared with the Chinese architect Ou Ning as part of the US-China Forum on the Arts and Culture, she articulated the questions that guided her celebrated renovation of New York City’s Lincoln Center for the Performing Arts: “How does one make preservation a creative act, and not one of embalmment? How does one work with the original DNA and transform it into another idiom that’s more productive?”

These same questions informed all the designs Diller highlighted at her solo panel later on at the Festival, titled “Radical Creative Spaces.” The Lincoln Center project, in which Diller attempted to break down the “high culture-low culture condition” by inserting parks and other common areas into the tradition-laced campus, was just one example of structures Diller has updated with the goal of “making good on the goodness of public spaces.”

“It’s less to do with the physical structure and more about…where architecture can make a dent into politics and into the conventions of everyday life,” Diller explained. “It can have a civic relevance.” Several weeks after 9/11, for instance, she build a 300 foot-long ramp that became a viewing platform for the general public, whom she said had “a compulsive need to bear witness to the nothingness that was there…This was hardly architecture, it was a vehicle, and it had this unofficial power.”

Discussion surrounding Diller’s planned Fall 2013 addition to the Hirshhorn Museum in Washington– a bubble-like pavilion made out of translucent fabric and blown up at the center of the structure – has not only shaken up the nation’s capitol but also provided a metaphorical space where “art and politics meet at an ambiguous site: outside the museum walls, but strangely within the museum’s core,” and where the Hirshhorn has launched a public forum dedicated to cultural dialogue and diplomacy.

And perhaps Diller’s most well-known project of late – the High Line in New York City’s Meatpacking District, which has generated over two billion dollars for the city – has reinvented the experience of leisure in the country’s speediest city.  The promenade-style public park built on a mile-long stretch of an abandoned railroad has captured “nostalgia for a lost past that we very much want to grab hold of and not let go of, and skepticism of a homogenous future.

“New York City is a dense, incredibly theatrical space in transition mode, hovering between decay and renewal. [The High Line is] capturing something that’s quite old fashioned: slowing down and going to the park to escape and do nothing.”