The following essay was adapted from a commencement address delivered earlier this month to the students of Arizona State University.

Let me start by speaking very personally. I envy you all.

You are graduating and starting the next phase of your life at an amazing time.

The tools you have been exposed to, the knowledge and skills you have picked up through hard work and play, and the networks you have woven empower you to do amazing things. If, that is, you are willing to exercise your imagination within the social networks you have built, you will truly find ways to forge exciting futures for yourselves, for your families, for Arizona and for the world.

You are transitioning from being a student to being an entrepreneurial learner: a learner who is skilled at learning with and from your interactions with the world and with others. You will be engaged in quests where you will draw not only on the known resources all around you but also on hidden resources you must discover to do what others might think impossible. Indeed, that you yourself might think impossible at first.

You live in the networked age powered by digital technologies that drive an exponentially expanding knowledge base and connect a diverse, globalized world. These are amazing times.

I also started my career at an amazing time: I undertook my Ph.D. at the beginning of the digital revolution, a few decades ago. I found my way to Xerox PARC, the legendary Palo Alto Research Center

At PARC we imagined new ways to build and design, new ways to communicate and new ways to collaborate — all focused on inventing the emerging future of work that was supercharged by new information-based technologies.

Our mantra was simple: “Invent what you need but always use what you invent.” No paper tigers were allowed.

I felt like a kid in a candy store. Imagination and collaborative invention were the coins of the realm. We invented much of what we, today, take for granted:

Yes, in a way, it felt like a Cambrian Explosion where new life forms were starting to emerge.

I say all this today because you are at the threshold of yet another Cambrian Explosion. Part of this is technical, but more critically, we’re also seeing the emergence of major new social and institutional forms and practices.

On the technical side you know the litany: social media, big data, mobile first, information visualization, machine learning and, of course, cloud computing.

In fact, the computational powers you have at your fingertips are now literally more than 10,000 times the power of what I first experienced.

And just consider that 3D-printing, a foreign concept just a few years ago, can now save the life of a baby whose trachea and bronchial passages have collapsed. To me, that is simply amazing.

On the social and institutional side of this new Cambrian Explosion you are probably the first class to have experienced the full potential of uniquely personalized learning trajectories. Through the use of artificial intelligence and machine learning techniques, some of your courses changed while you were taking them to optimally select and present new learning experiences and challenges. In your labs and maker spaces you have had the chance to learn by doing — knowledge in action engaging both head and hands!

You have experienced here the New American University. This is a new kind of university aimed at creating a new kind of transdisciplinary learning environment and knowledge creation space that cultivated your imagination as entrepreneurial learners in the network age.

But what career trajectories will you, today, embark on?

For my parents, the typical career trajectory was like a steamship. They set course, fired up the engines, and powered ahead. Useful, in the industrial age, but probably not useful today.

For your parents here today — and for me — our career trajectories have been navigated more like a sailboat. We set course, and hopefully through skillful tacking and maneuvering, we’ve played the winds and currents to get where we thought we wanted to go. Blown off course sometimes, sure, but overall still a well-crafted trajectory.

But for you all, today, the environment is radically different. You are in the living in a whitewater world. 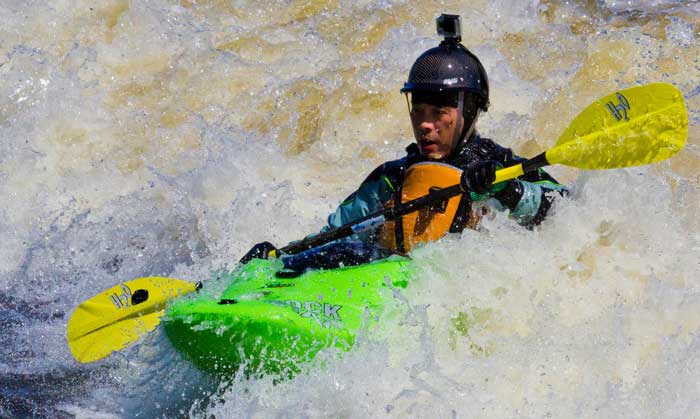 You must be more like a whitewater kayaker who skillfully reads the currents and disruptions of the context around you.

You must interpret the flows, the ripples, the rapids, and understand what they reveal about what lies beneath the surface. You must operate with both body and mind, living totally in the moment, experiencing the immediate at-hand circumstances and quickly analyzing information from all your senses — sight, sound, touch and force feedback from the paddles — to understand the environment and how it is responding to you.

To survive in this radically different environment, you need to live in an ongoing conversation with the flow. You need to feel, gauge, and interact with the flow of information passing all around you.

What keeps the whitewater kayaker afloat? What keeps him right-side-up for the run? What helps him roll right when he flips over? It’s the way he uses his center of gravity in terms of the line of balance. It is the axis of balance that gives him the confidence to take on the whitewater and increase his levels of risk-taking. In this metaphor, this line of balance is analogous to authenticity and integrity. Authenticity is simply the capacity to know yourself, your core strengths, weaknesses, values and motivations, and to work from them and for them. In a radically contingent whitewater world, decisions and actions need critically an authentic place to work from. That is your base of operation.

This is a different world — a world where skills matter, tools matter, but expertise and authenticity are also required. It’s a world with powerful tools galore and immense opportunities available only if you are willing to unleash your imagination and invoke your skills.

Indeed, for me, the whitewater kayaking metaphor calls forth a set of quotes that help orient me in these whitewater times.

The first is from Arthur Schopenhauer and concerns the key to innovation: “Thus, the task is not so much to see what no one yet has seen, but to think what nobody yet has thought about that which everybody sees.” Schopenhauer died in 1860 but that thought is perhaps even more important today than it was 150 years ago. Just consider, for example Uber, a company that was just valued at $50 billion.

The second thought I want to share concerns the authentic role of technology: “The most profound technologies are those that disappear. They weave themselves into the fabric of everyday life until they are indistinguishable from it.” Technology in service of life and woven into it: this is a powerful image.

That’s from my friend Mark Weiser, the founder of the ubiquitous computing movement who died of cancer at too early an age.

And from the Imitation Game, the recent film about Alan Turing: “Sometimes it is the people who no one imagines anything of who will do the things that no one can imagine.” Beautifully said by Turing (or at least by Benedict Cumberbatch in the movie). Turing lived a turbulent but authentic life. He did the things that no one could imagine because of his ability to see and sense something no one else could, and because of his authenticity and uncompromising nature.

And finally, let me share a quote I try to live by in today’s world of extreme information overload:

The greatest thing a human soul ever does in this world is to see something and tell what it saw in a plain way. Hundreds of people can talk for one who can think, but thousands can think for one who can see! To see clearly is poetry, prophecy and possibility — all in one.

I would encourage you to look deeply at the world around you as you engage in your future. Look deeply in the flows, the ripples and the rapids. Look deeply and see clearly. I encourage you to find, nurture and strive for the authentic version of yourself. Because it is that authentic version that something will continue to evolve from. Embrace the endless possibilities within the whitewater world. Thank you, and may you have a prosperous life.

John Seely Brown is a frequent participant in Communications and Society Program roundtables and other activities at the Aspen Institute. To read more on Innovation, and whitewater learning environments, see csreports.aspeninst.org and aspentaskforce.org. He would like to acknowledge poetic and editorial help from Ann Pendelton-Jullian, his co-author on the forthcoming book “Design Unbound: Designing for Emergence in a Whitewater World.”