A panel of veteran and aspiring playwrights and performing artists gathered for a fireside chat in Aspen, Colorado, recently to discuss the primordial question: Where do ideas come from?

Led by Julia Hansen, artistic director of Aspen’s acclaimed Theater Masters, the panel included Robert LuPone and Andrew Leynse, award-winning veteran artistic directors of the New York theater community, plus eight MFA students and one high school student who won Theater Masters’ national playwriting competition. It was the eighth year that the Aspen Institute has provided a public forum for the playwrights — and the only discussion-based event of Theatre Masters’ annual playwrights festival.

LuPone, who earned a Tony nomination for his role as Zach in “A Chorus Line,” spoke of the genesis for the hit musical, one of the most successful in Broadway’s history. 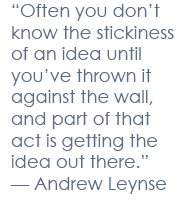 The idea to tell the stories of chorus line dancers originated in a conversation with director Michael Bennett, who in 1974 developed the concept by gathering 30 Broadway dancers in a room and turning on a tape recorder, said LuPone. The dancers talked about who they were, personally and professionally, answering questions such as why they started dancing and what they would do if they couldn’t dance anymore. After some further workshopping, Bennett crafted the transcripts into the script for “A Chorus Line,” which opened at the Public Theater — a then-small off-Broadway theater — in April 1975.

“All of us were completely unprepared for the response, which was phenomenal,” said LuPone. “We were the toast of the town.”

“A Chorus Line” moved to Broadway in July 1975. It won nine Tony Awards and the 1976 Pulitzer Prize for Drama, and was one of the longest-running productions in Broadway history.

LuPone spoke to why “A Chorus Line” was so universally successful.

There’s a difference between an idea and a notion, he said. “This was a real idea. This was something everyone could relate to: to aspire to a job, to not get a job, to work as hard as they did.”

The result, LuPone said, is good theater, in which “we have this tribal experience where we share the human condition with each other.”

Finding an idea that resonates among many ideas is the challenge for playwrights, said Leynse, who is in his 12th season as artistic director at the award-winning Primary Stages theater in New York. “Often you don’t know the stickiness of an idea until you’ve thrown it against the wall, and part of that act is getting the idea out there,” he said. “I’ve stopped trying to have good ideas and am working on throwing them against the wall.”

The young playwrights, who are masters’ candidates at some of the top playwriting programs in the country, also shared where their ideas come from. And while their answers were diverse, they are all rooted in, as one of them put it, “what’s the deal with humanity?”

The awkwardness of everyday interactions is where Emily Zemba of the Yale School of Drama finds inspiration. Northwestern University’s Will Arbery explores shame, and Carnegie Mellon University’s Julie Jigour is fascinated with the subtext of what people mean as opposed to what they say. Brian Kettler of the University of Texas at Austin uses children in his plays because he believes they’re more honest with their true feelings and emotions than adults. Nathan Cann of New York University aims to be completely aware and present in his own interactions, which may spawn the idea for a play. And Raquel Almazan of Columbia University draws her ideas from the experiences of people in the broader community, asking herself each time: “Who is this play for?”

Hearing from the student playwrights about their craft, their ideas, and their thought processes in a public forum is the highlight of Theatre Masters’ collaboration with the Aspen Institute, said Aspen Institute Community Programs Director Cristal Logan. The larger playwrights’ festival also includes workshops and performances of the winning 10-minute pieces first in Aspen and later in New York.