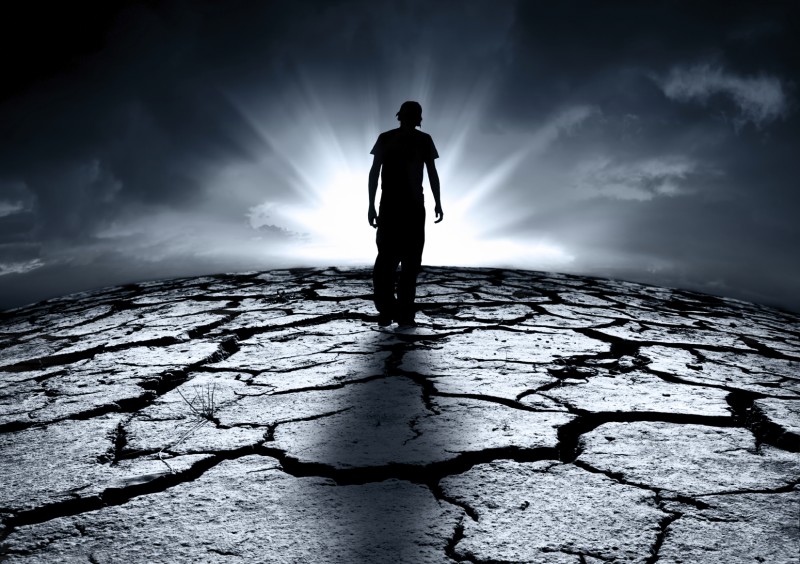 Last week’s People’s Climate March in New York City has been heralded by organizers as the largest climate change demonstration in history. Is a mass gathering of this size indicative of a shift away from focusing on climate change legislation to grassroots efforts? And what does this mean for the future of the climate change movement?

For more context, we spoke to Aspen Institute Catto Fellow and Conservation International Executive Vice President and Senior Scientist M. Sanjayan. Sanjayan recently spoke at the Social Good Summit and was featured on Showtime’s recent documentary “Years of Living Dangerously.” Below, he explains how grassroots momentum may breathe new life into the climate change movement, how he sees climate change affecting communities around the world, and how small individual actions can make a big difference.

Aspen Idea: Does a large-scale grassroots demonstration like what we saw last week signal a shift in the climate change movement?

M. Sanjayan: I was skeptical until I saw what was happening in the city — I was in New York over that weekend and it really was an “event.” To me it was notable for three reasons:

I found it fascinating that so many different causes were finding common ground with climate danger. And that is what we need; we need everyone, irrespective of their primary interests, to also focus and share a platform with climate change. 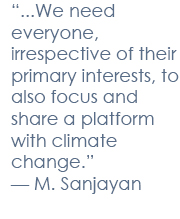 I saw Bill McKibben the next day, backstage at the Social Good Summit. It is encouraging that his genius in engaging folks, particularly young people, seems to be paying off. For too long, the climate movement has been focused on being strategic and playing a high-level chess game. We forgot that movements need a ground game as well. They need ordinary folks showing up. Copenhagen was a real lesson for the movement, when environmental groups went into the climate meetings with high hopes that were dashed. That’s when I realized we actually also needed the mass of civilization behind us to push change.

That said, I was disheartened with the lack of US political leaders participating in the march. Yes, the mayor of New York City was there, but many current politicians were missing and this is one issue no one can afford to sit out.

AI: What do you think has been missing from the climate change movement up to this point?

MS: In a word, diversity in the movement’s leadership — national, cultural, gender, and political. It matters because with climate, the messenger is as important as the message.

The movement has also failed to highlight the leadership of corporations. In the absence of government leadership, companies have taken on sustainability and climate mitigation and adaptation; this is something that needs to be rewarded or at least acknowledged.

We also need to frame the debate in terms of public health and risk reduction — make people the face of climate change rather than polar bears.

Finally, and obviously, meaningful government action continues to be missing. Governments frequently take on roles in matters of public health, for example smoking or auto safety. The same should be true now for climate change.

AI: How do you think the movement can reorient itself?

MS: It has to reorient itself if it is to be a true movement. Despite the huge numbers that turned out for the People’s Climate March, we are still vastly in the minority. To do so will require pragmatism combined with a laser focus on the big prize. Too often, we lose ourselves in tactical battles.

AI: There has been a great deal of focus on climate change legislation and the role of government, but how about the role of the private sector? What are the sorts of things you see corporations doing that are working especially well?

MS: People lead, then governments follow. If we are waiting for governments to get their act together, we will wait for too long. So once you take out governments, you quickly realize that the most powerful actors are corporations. They are vast and influential — without a doubt, the most powerful ally we can engage with to institute rapid change.

Today, big companies are starting to understand that sustainability equals availability, meaning if they want to grow and provide to a world of 7 or 8 billion people, managing natural resources is critical.

Frankly, if you look at the big things that could be achieved with changing our energy equation, many are firmly in the hands of corporations. Take battery storage capacity as an example. Private companies are making big strides in this. Another area ripe for improvement is reducing the cost of renewables and improving the efficiency of solar and wind. Further, retrofitting buildings to make them energy efficient is now a huge business.

AI: You are a scientist and spend much of your time traveling around the world trying to better understand places that have been affected by climate change. Can you share a few stories that demonstrate the human element of how climate change can impact a community?

MS: I recently was asked to be a correspondent on a major series on Showtime called “Years of Living Dangerously,” which won the 2014 Emmy for Outstanding Nonfiction Series. As part of my journey, I travelled to the Andes in Chile and to Christmas Island in the Pacific, in the Republic of Kiribati. A year ago, I spent some time in Bangladesh and I have a home in Montana in what is prime ranching country.

I can tell you from first-hand experience people, especially the rural poor, are aware of and frightened by the impacts of climate change. They are already living on the margins of survival with little room for error and [are] often acutely aware of nature’s response. In the Republic of Kiribati, the president, Anote Tong, has the unenviable task of trying to relocate his entire country, and as he puts it, he wants to do this with “dignity.” Can you imagine? Think how hard it is to lay off people in a company, now think about doing it for a whole country, then finding everyone new jobs, schools, health care, places of worship, etc.? It’s a disheartening and monumental task.

In Bangladesh, travelling through the Sundrabans, the world’s largest mangrove swamp, you are acutely aware of how vulnerable people are to sea level rise. Indeed, the country is seeing a huge urban migration prompted by rising waters and drowning farmland.

And in the arctic some years back, I visited some Inuit communities who were losing their ice cellars. Families have maintained these permafrost cellars for decades for preserving meat and fish. Now they are thawing out and spoiling the supplies for the winter.

In Montana, where I live, snowshoe hares are being caught out with the wrong color pelage — white hares on a snowless background, unable to change quick enough with the late advent of snow. And ranchers know as summers get hotter and winter moisture disappears, their cattle will be under stress.

Today, you don’t have to go far to see the impacts of climate change — it’s here and it’s in your backyard.

AI: What would you tell people who want to make a difference with climate change to do?

MS: Don’t sit this one out — engage. Make personal choices that make a difference. I believe small actions matter. Sure they may be symbolic — like changing a light bulb or biking to work, or driving a hybrid, or installing solar panels, but that is how you change the conversation. People are most influenced by their peers, and as you change and adopt new practices, it does influence your neighbors.

But you can’t stop there. You also have to be engaged politically and demand that our elected representatives make a low-carbon, more resilient future a priority. Look at public utility commissions — these few individuals control much of a state’s energy profile and they should hear from engaged voters.

Finally, make good choices — in what you eat (eat low on the food chain and waste little) and support companies that are promoting energy efficiencies. Your wallet is a ballot box — vote with your dollars.

We all want to be on the right side of history and with climate change the evidence is clear. The key thing is to not fall into the trap of thinking that this issue is too big to deal with and someone else is taking care of it. It is up to you. And me.