For all workers, there are only 24 hours in a day to accomplish both job and home responsibilities. While racing the clock is a universal experience, the challenge is particularly acute for those with de-stabilizing job schedules who live with little or no economic cushion.

I thought about this over the holidays as I saw people shopping for gifts for loved ones. It made me wonder about the retail workers on the other side of all those cash registers. Retail workers make up about ten percent of our nation’s workforce[1] and that percentage increases during the holiday season. For those who receive little or no notice of the hours they’re expected to work or the unexpected mandatory overtime demands they must meet, for those who receive too few hour or those expected to work on Thanksgiving Day, their smiles and “happy holidays” greetings surely mask job-driven anxiety.

A surprising number of workers struggle to succeed in jobs with challenging schedules. Within the retail industry, a national survey of younger workers (26 to 32 years old), found that half were informed of their work schedule one week or less in advance.[2] Overall, about 17 percent of the U.S. workforce experiences unstable work shift schedules; this includes irregular, on-call, split and rotating shifts.[3] More than six million workers have part-time hours but would like to work full-time.[4] 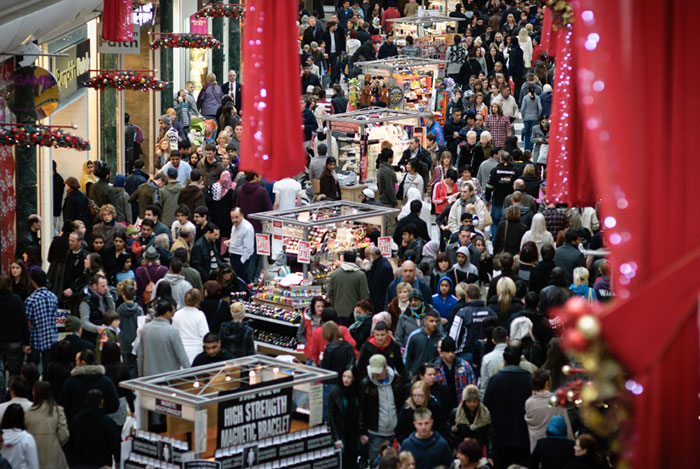 The stress is fueled by the rolling repercussions a difficult schedule can have on child care, school schedules, and family.

Every working parent grapples with the challenges of child care, but these arrangements get especially complicated when a parent’s work hours are based on an unpredictable schedule.[5] A Restaurant Opportunity Centers United (ROC United) survey found that fully 1 in 5 restaurant workers who are mothers lost their child care provider because of changes in their work schedule. [6] Few child care programs can operate effectively when a parent’s drop off and pick up time changes unpredictably; consequently, parents with challenging schedules often rely on friend, family and neighbor care. Informal care can be a great fit but its continuity can be more precarious than formal or licensed care – which can add to family stress.

A parent’s job conditions and schedules during a child’s first year of life can significantly and negatively impact a child in future years. This bombshell news comes from a longitudinal study of low income working families, led by Dr. Maureen Perry-Jenkins of the University of Massachusetts-Amherst[7]. The Work and Family Transition Project examined parental working conditions during the child’s first year of life and then assessed the child’s behavior at school at age six. Perry-Jenkins found that those children whose parents labored under poor working conditions (including disruptive schedules, little sense of control, unsupportive supervisors) exhibited significantly more behavior problems than other children. [8]

A parent’s job conditions and schedules during a child’s first year of life can significantly and negatively impact a child in future years.

Workers who are stuck in jobs at the low end of the market often seek a credential or degree to gain a better paying, more stable job. The vast majority of students in post-secondary education, 15 million people, also hold a job. About 20 percent of them work full-time, year-round.[9] Approximately one-third of working students between the ages of 26 and 32 get one week or less notice of their job schedule.[10] Some educational institutions are taking note and providing block schedules, which allow the student to have a set course schedule that won’t change. This means that a working student knows exactly the hours available for work for the year rather than hours that change each semester. Some employers are also stepping up and providing flexible schedules so that their workers can attend class and advance in their careers.[11]

Challenging job schedules often result in paychecks that fluctuate. That’s because employers not only change the times when workers need to show up, but also they change the number of hours workers are given. This translates into households on a financial roller coaster. The Federal Reserve Board recently found that nearly a third of Americans experience considerable fluctuations in their incomes. More than 40 percent of these workers attribute their financial ups and downs to irregular work schedules.[12] Budgeting for rent, groceries, child care and other expenses is hard enough for those with low incomes, but when that limited income is volatile, effective budgeting is almost impossible.

The good news is that policy makers, employers, and the media are taking note of the value of more stable job schedules. A New York Times story about a Starbucks barista vividly depicted how a job schedule can destabilize a hard-working family. One issue explored is how company policy around “clopening” — when a worker both closes a retail shop at night and opens it the next morning — can wreak havoc on families.[13] In response, Starbucks announced plans to change a number of scheduling practices.[14] (A recent report[15] suggests that those changes are slow in coming.)

Over the past year, a slew of employers have announced plans to move away from unsustainable scheduling practices. Major retailers, including Abercrombie & Fitch and Urban Outfitters, are eliminating “on call” scheduling, which obliges employees to be available for work at specific times but leaves them unpaid if they don’t get called in. The Gap has embarked on a major analysis of alternative scheduling practices.[16] L-Brands, which includes Victoria’s Secret and Bath & Body Works, has announced plans to give workers more hours and higher wages with the expectation that this will reduce the cost of worker turnover and increase revenue by 10-15 percent.[17]

Employers change the times when workers need to show up and the number of hours workers are given, putting households on a financial roller coaster.

Although software used to schedule employees often gets blamed for being the source of scheduling practices that create challenges for workers, this tool can also be used to improve workers schedules. Last month, I participated in a panel discussion with William Tompkins, Senior Vice President for Human Resources at Macy’s, who described the company’s revamped worker scheduling system. Employees build their schedules up to two weeks in advance. Using the software, employees are able to establish when they can work and they can voluntarily pick up hours when shifts become available. There are no last minute surprises since employees are never on-call and they are never sent home early. Smaller companies, too, have instituted responsive scheduling practices. Businesses such as the Vermont Energy Investment Corporation, Ace Hardware, Bright Start Childcare & Preschool in Washington, D.C., and Bi-Rite stores in San Francisco have laudable practices and have spoken up in favor of public policies that set minimum standards.

Absent public policy that sets minimum standards around scheduling, too many jobs, particularly those at the low end of the labor market, will fail to provide decent schedules. Since the service sector is projected to be in the forefront of our economic growth, minimum standards are even more essential. While there is a business case for improvements in scheduling, many employers believe their current profit justifies their scheduling practices; after all, the profit you know is more tangible than the margins you may increase in the future.[18] But what happens to workers impacts families, communities and the economy. It is appropriate that Congress[19], cities, and states have proposed policies to improve scheduling practices. San Francisco has enacted a law focused on large retailers. The law sets minimum standards to improve retail work conditions, including advance notice requirements and compensating workers for last minute schedule changes. About a dozen states and a growing number of localities have introduced scheduling-related legislation.

Before the next holiday season in 2016, let us hope for more employers who lead the way and offer lessons for sustainable job scheduling strategies and practices. And let us wish for new laws that set minimum standards. That would be a gift to the nation for all seasons.

Jodie Levin-Epstein is Deputy Director of the Center for Law and Social Policy (CLASP). For more on job scheduling, visit CLASP’s National Repository on Job Scheduling Policy, a one-stop shop which pulls together reports, news, legislation, and research from around the country.

To listen to a panel discussion featuring Jodie and other perspectives on retail job scheduling, see Shop ‘til Who Drops? Exploring Retail Jobs this Holiday Season.

[12] Board of Governors of the Federal Reserve System, “Report on the Economic Well-Being of U.S. Households in 2013,” United States Federal Reserve, July 2014 http://www.federalreserve.gov/econresdata/2013-report-economic-well-being-us-households-201407.pdf, accessed December 30,2015