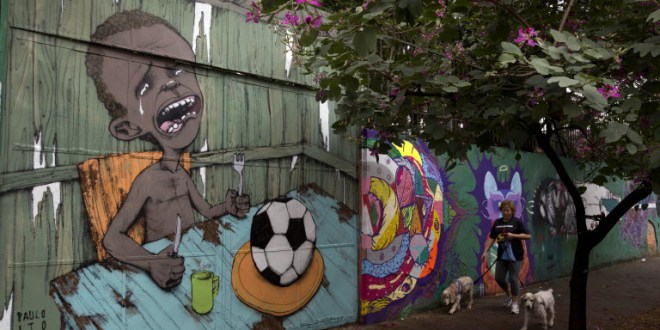 Above is the work of Brazilian street artist Paulo Ito. (Photo: Google Images)

It’s an exciting, yet complicated week in Brazil. As soccer fans all over the world turn their attention to the 2014 World Cup, the host nation is plagued by construction delays and demonstrations in the streets. What do the large scale protests tell us about the feelings of everyday Brazilians? How does Latin America’s largest economy climb out of the economic stagnation of the past few years? We spoke to Eduardo Wurzmann, Henry Crown Fellow and co-founder of Grupo Ibmec, a leading provider of postsecondary education in Brazil. Wurzmann traces the current resentment as more of a reflection of the underlying anxiety among Brazilians about the direction of their country than an outgrowth of frustration over World Cup preparations. Despite this, Wurzmann explained why he remains optimistic about Brazil’s future.

Aspen Idea: As someone who is on the ground in Brazil, can you describe the atmosphere there in the lead-up to the World Cup?

EW: We all love soccer, but the overall feeling is bittersweet. It is certain that Brazil has made enormous improvements over the last 15 years and that the quality of life has dramatically improved across the board. We now find ourselves at a real inflection point. There is a disconnect between our politicians and the people — politicians feel that things have improved enough that the population isn’t justified in complaining. As an example, a professional in Sao Paulo is happy that their wages have increased and that they now have access to credit to buy a car or get a mortgage on a home. At the same time, I believe they are justified in raising their voice to say that spending four hours a day on public transportation getting to work is unacceptable.

AI: Amid all of the cost, challenges with preparation, and the negative press about the World Cup, is it still worth it?

EW: There are two dimensions to this, how the actual event will go, and the broader legacy. I think during the World Cup, Brazilians will behave very well. We are warm people and the atmosphere will be easy and fun. I don’t anticipate any problems during the event. However, I don’t think the legacy of this event will be a positive one, I think we have wasted an opportunity.

AI: What are the biggest challenges Brazil is facing as a society right now?

EW: There is a desire to do everything at the same time. We should instead focus on the most important issues and really work to make an impact. The biggest challenges we face over the next 10 years are unlocking growth and improving K-12 education. Our real difficulty in Brazil is not in understanding what we need to do, it is in gathering the will to actually get it done.

AI: What is your prescription for unlocking growth?

EW: First we have to go back to allowing market forces to run our economy instead of bowing to our tendency to want to pinpoint and champion certain industries. The bonanza of the 2000s has ended and we are growing at 1.5 percent, which is just not enough. Oddly enough for a country of our size, Brazil’s economy remains very closed. If you look at exports as a percent of imports in Brazil, it is very low, even when you consider that we are a continental economy with a large domestic market. An example of this is the oil industry — we export oil, but import gasoline. Gasoline is then subsidized to make the prices lower than they are internationally and our politicians haven’t been willing to make a decision that will be unpopular in the short term to remove those subsidies. It’s critical that we open up our markets.

AI: On education? What needs to be done, and as a leader in the field, how are you making an impact?

EW: There is an enormous civil society movement going on to improve education. When you compare this to 20 years ago, no one was even talking about education in Brazil, now this issue is in the front page of our newspapers every day. I’m passionate about improving K-12 education and truly believe that once you have that foundation, the other elements of the education system will fall into place. Several years ago, I decided that above all we needed to expand our offerings and founded Veris Educacional S.A., which has become one of the fastest growing vocational schools in Brazil. Federal spending on education has increased dramatically over the last 10 years. I believe the next wave of improvements in education will come from our cities. Ultimately, it is our cities that are uniquely positioning to step into the void of federal and state leadership and tackle tough issues.

AI: How will this moment affect the future of Brazil?

EW: I am absolutely optimistic. When Brazilians look back at the last 20 years with some detachment, we realize how much things have changed, but also recognize that it is not enough. People are now empowered. They feel that they have a stake in the game and that they have something to lose. The next few years are going to be difficult ones, but I believe the call for change that has begun in the streets will have an impact on the elections this fall and beyond.