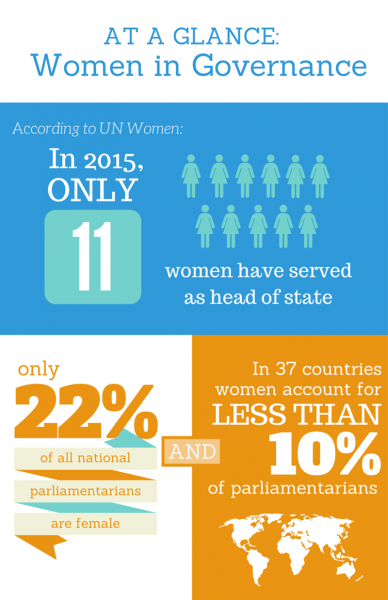 In this moment, millions of lives are threatened by poverty, food insecurity, and climate change, sounding an urgent call to action to global leaders. But this year has the potential to be a turning point, as more than 150 world leaders are gathered at the United Nations Sustainable Development Summit in New York to launch the Sustainable Development Goals (SDGs). The Summit agenda will serve as a plan of action by the international community and by national governments to improve human lives and promote well-being for all over the next 15 years.

Each of the 17 SDGs focuses on a different aspect of development, including goals to address eliminating poverty, promoting good health, ensuring peace and justice, guaranteeing the access to clean water, and more. While the goals touch these specific areas, their success is contingent on a comprehensive integration reflecting the way they are experienced in an individual’s life.

Women, especially those who live in the developing world, are disproportionately affected by development challenges. For example, climate change has serious ramifications for agriculture, and women farmers currently account for 45 to 80 percent of all food production in developing countries. In the developing world, about 60 percent of the women’s labor force is engaged in agricultural work. This proportion can be up to 90 percent in African countries. In the context of climate change, traditional food sources become scarce and unpredictable, meaning women, and the households that depend on them, must cope with a lack of both food and income.

As leaders around the globe set the path to transform our world through sustainable development, they must not miss the opportunity to put women at the center of their efforts. One major aspect of that is to include women in political participation.

These norms and standards stress the critical importance of women’s political participation in all contexts, and call on UN Member States to take actions that promote women’s participation in governance and remove barriers that marginalize women. However, according to UN Women, as of this year, only 11 women have served as head of state, only 22 percent of all national parliamentarians are female, and there are still 37 countries in which women account for less than 10 percent of parliamentarians.

The need to increase the participation of women in governance remains a priority. This is evident in the Sustainable Development Goals, in which goal 5.5 is to “Ensure women’s full and effective participation and equal opportunities for leadership at all levels of decision-making in political, economic and public life.”

Not only is this a goal in and of itself, but also women’s participation in governance is central to achieving other global development priorities. For example, Sustainable Development Goal 6 is to “Ensure availability and sustainable management of water and sanitation for all.” Research on local councils in India showed that in areas with female-led councils, there were 62 percent more drinking water projects than in those with male-led councils. This causal relationship is likely due to the fact that around the world, women are more likely than men to be responsible for tasks such as providing water for the family, and using the water to cook and clean and for agricultural work. Women therefore often have the greatest understanding of the deficiencies that exist, and can offer essential knowledge of how to advance their own rights by driving progress in development.

As the programs, policies, and funding take shape to achieve the momentous Sustainable Development Goals, it is critical for global leaders to encourage women’s participation in governance, amend policies that discriminate against women’s participation, and involve women’s groups in policymaking. Sustainable development will be reached if women are included as full partners in the effort.