In 1969, at Western Junior High School in Bethesda, Maryland, we girls went on strike. Our strike was noble, just, and good — we protested to be allowed to wear pants to school, which was forbidden for girls at that mid-century moment. We won. And from then on we were able to run, jump, and sit comfortably in class, as were generations after us. A few years later, in 1973, I was one of the founders of the first women’s group in a high school in the country — Women of Whitman — where we discussed feminism and advocated for butter pecan ice cream in the cafeteria, among other things. Our group was visited by the legendary Barbara Walters, then a young journalist with large round glasses and big hair, for a TV series called “A Feminist Is…” I remember my father quickly shutting off the TV when my interview was aired as his boss was over for dinner, and he feared “they would think I was a communist.”

The Women of Whitman won many battles as change was rippling across American society. I have won battles in my own journey to have meaningful work, sexual and social freedom, and a strong identity not solely defined by my relationship to a man. This vision was my mom’s greatest wish for me — to have the professional career she never really had, to marry for love when and how I wanted to, to have my own bank account, and to vote for whomever I choose. I marvel at how far we have come — but every so often I am gobsmacked by how far we have NOT come.

Nowhere do I feel it and see it more clearly than in the subtle but treacherous discrimination that arises with Hillary Clinton in the spotlight. I see her as a spiritual sister to that younger woman I was, fighting for pants in junior high, fighting for women’s rights in high school. Hillary has shown us how to be an effective senator, secretary of state, activist — yet she keeps hitting the Women’s Wall — that place where “style” becomes more important than merit. I sit at dinner tables where perfectly intelligent friends talk about her lack of “likeability,” claim she was granted special favors as First Lady, and argue that she skirts the rules. 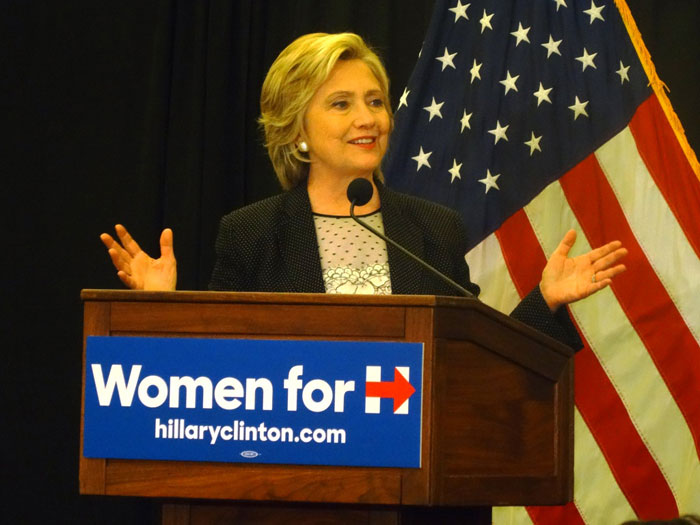 Hillary Clinton speaks at the University of Wisconsin-Milwaukee in September 2015. Photo via Flickr user WisPolitics

And I listen, conflicted, struggling to find a way to counter this narrative, which, at its heart, we and all women are doomed to lose until enough generations have been born that see women differently. And until we, as women, stop working so hard to squeeze ourselves into one more picture of what others want us to be. When some see Hillary as hard-edged or tough, I see a woman who has had to morph from a head-banded wife of a southern governor to the leading diplomat of the world’s only superpower. Her intellect, composure, warmth, focus, determination — brilliance, really — all resonate with me. We women still have to play so many roles and struggle with how to hold and wield power in a world that feels very uncomfortable with us having it.

Can it really be that we’ve moved so far but that some issues — my inalienable right to decide what happens to my own body — are still subject to debate?

I have spent my life working to be a leader with both head and heart — to be clear and directed yet still build humane and caring workplaces where people can be their best selves. My trajectory has been long as well — behind Hillary chronologically — but old enough to remember those little ribbon-like bow ties we wore with our suits as the first generation of women on Wall Street, and old enough to freely be able to buy the pill and have an abortion before those rights became the battleground they now are.

I struggle to understand the progress and the sweeping recoil. Can it really be that we’ve moved so far but that some issues — my inalienable right to decide what happens to my own body — are still subject to debate? And I return to the withering treatment of Hillary as she stands in the spotlight again, and I realize that we have not, in fact, come very far.

So Hillary — my plea for you is to stand strong. Bring us beyond 70 cents on the dollar in pay equity. Bring us beyond petty and stale debates pitting motherhood against work. Lead us. Show us how to lead with both head and heart. I, for one, am watching and hoping for a woman President, with butter pecan ice cream, pay equity, girls in school, and all the opportunities ahead we can only begin to imagine for both girls and boys, all over the world.

Peggy Clark is Vice President of Policy Programs at the Aspen Institute, Executive Director of Aspen Global Health and Development, and Director of the Alliance for Artisan Enterprise