Above, watch the full session of a 2014 Aspen Ideas Festival panel discussion on how to create opportunity at home and abroad to improve the lives of women and girls.

When Northwestern University Kellogg School of Management Dean Sally Blount’s daughter wanted to take a gap year after high school and travel the world, Blount was hesitant. But when her daughter told her, “This is what the person I want to become would do,” she changed her mind.

Blount told this story at the 2014 Aspen Ideas Festival, during a session entitled, “Our Future: The Best Thinking About the Transformative Power of Women and Girls.” Female leaders from across a variety of sectors — from Huffington Post Co-Founder Ariana Huffington to Woodrow Wilson Center CEO and former Congresswoman Jane Harman — shared their thoughts about ways to advance the cause of women and girls, and in so doing, advance the world.

“We have a responsibility to both encourage and support young women to be deliberate in dreaming about the people they want to become,” Blount said of the phenomenon of women making up more than half of the student bodies in US colleges and universities, but remaining a fraction of the world’s CEOs, board directors, and government leaders. 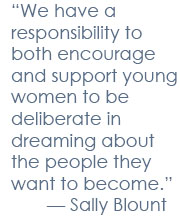 However, The Atlantic Contributing Editor and author of “Marry Him: The Case for Settling for Mr. Good Enough,” Lori Gottlieb, has a different view of the situation. She shared an analogy about how she once told a friend that she should apply for lower level jobs, and realized she had gone off the “female empowerment script.” Her big idea for the advancement of women?

“Stop being such liars,” said Gottlieb, “…We’ve become ‘yes women’ in the most dangerous sense. Thinking that we’re being supportive, we blindly cheer each other on, but how can we offer good counseling if we aren’t being honest?… Instead of a pack of well-meaning enablers, what we really need is brave women to tell us the truth.”

NAACP Legal Defense and Educational Fund President and Director-Counsel Sherrilyn Ifill offered yet another perspective, presenting her big idea: ending the imposition of stereotypes on girls. To illustrate, she told the story of a 16-year-old girl named Barbara, who organized and executed a walkout in 1952 as part of a civil rights demonstration in Virginia.

A plethora of ideas about women emerged from the discussion, including the effects of the exposure of cable television on women and children in rural and third world countries. “The Supreme Price” documentary Director and Harvard University lecturer Joanna Lipper described a study which revealed that women were prompted to limit family size when they saw women on television with few or no children. Women with access to such media were also less likely to tolerate domestic abuse, and young girls are more likely to attend school. However, media seems to have the opposite effect in the US.

Lipper quoted author Ralph Waldo Emerson in encouraging both men and women to seek the “attainable, yet unattained self.” This is a principle we can all remember as we think of the future of women and girls and their power to impact the future.

But, as Huffington proposed during the panel, perhaps it is time for the third women’s revolution. “Women need to lead the way,” she said.

Watch the full session of the discussion in the video above to hear all of the ideas the panelists shared.