“Sometimes I felt like no matter how hard I worked or how ambitious I was, I was never going to get ahead.” This sentiment, from a mother of two named Tina, is shared by many people across the United States. While we still value the notion of equality of opportunity in this country, in reality very few people are able to break free of the binding grasp of poverty. The simple fact is that children who grow up poor tend to stay poor as adults. Decreases in social safety net spending and in the value of the minimum wage, coupled with the higher education requirements of most family-sustaining jobs, have made it very difficult for low-income families to chart a course out of poverty.

However, organizations across the country that serve low-income families —including Crittenton Women’s Union, an organization that Tina has participated in — have seen more success in moving people toward economic independence by implementing intentional coaching models. By working with a coach, one-to-one, over the course of a few years, Tina has been able to get her finances under control, obtain a degree and a high-paying job, and help her son get into college. 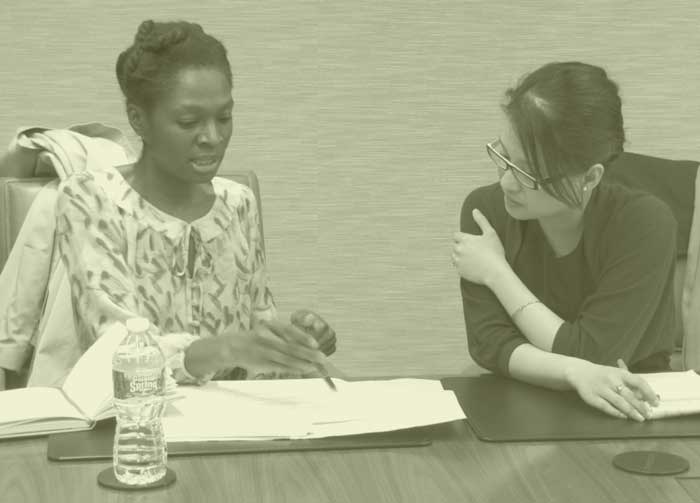 Image from “Coaching for Economic Mobility” from the Crittenton Women’s Union.

Coaching is an effective way to deal with the impacts of structural inequality. It makes people like Tina feel stuck, unable to get ahead. We now know from research across many fields—from sociology to behavioral economics to neurobiology—that the experience of living in poverty has very real impacts on certain key skills and mindsets, making it more difficult for poor people to chart a course to a better life.

It is important to note the cause and effect here: people are not poor because of individual traits; poverty itself impacts important skills and mindsets. Coaching doesn’t deal with the broad economic, social, and political issues that cause poverty, but it does help individuals deal with the very complex navigational feat of exiting poverty, a feat made more difficult by the effects of poverty.

So what are these effects? They fall into two broad categories: impacts on the sense of self and impacts on self-regulation.

The Sense of Self.

The foundations of the sense of self are laid in childhood. For poor children, class-based stereotypes and racism, less-predictable home and community life, and interactions with authoritative structures such as poorer quality public schools and public housing, can all create huge impacts on the sense of self. These experiences can cause children to develop a lack of self-efficacy — a feeling that things “happen to me,” instead of “I make things happen.” As children grow up, these experiences also shape their identities and ideas of what they “deserve” and where they “belong.”

In adulthood, the day-to-day experience of living in poverty also affects a person’s sense of self. Social bias — including class-based bias and racism — continue to impact the sense of self in the moment. The overwhelming and persistent stress associated with being in poverty — constantly having to worry about not having the means to provide for oneself and one’s family — with no respite or hope of improvement in the future, can bring on a general feeling of helplessness.

Poverty’s impacts on the sense of self are important. People can’t make changes in their lives if they don’t believe they deserve that change, or possess the ability to make that change. Poverty makes people believe their actions won’t meaningfully impact their situation and can paralyze them.

Further, day-to-day stress can hijack anyone’s ability to self-regulate in the moment. Rich or poor, we have all felt the impacts of stress on our ability to control ourselves. Who hasn’t cheated on a diet after a particularly stressful work week, or snapped at a loved one after sitting in traffic? Because poverty in the United States today brings constant, overpowering stress — especially with a deteriorated social safety net and extremely low-wage work with long and unpredictable hours — people living in poverty find their self-regulation skills can be challenged. Imagine living your most stressful day, every day, with no hope of a vacation, and then imagine how your ability to self-regulate might be impacted.

Poverty’s impact on self-regulation is important because in order for a person to make a change, that person must have the skills to do unpleasant things today that won’t pay off until far in the future (if at all), juggle multiple competing demands, and adapt to changing circumstances.

Meaningful coaching that intentionally works to bolster the sense of self and build self-regulation can substantially improve outcomes for those engaged in traditional anti-poverty programs. Coaching works because it builds skills and mindsets the way they are built throughout life: over a period of time through interactive relationships with others. The coach builds the participant’s sense of self by providing key messages about her belief in the participant’s ability to move forward, providing a platform for the building of positive identities, self-efficacy and motivation. The coach also provides a structure for the participant to practice key self-regulation skills such as comparing and weighing multiple priorities, goal-setting, and problem-solving.

Structured coaching interventions have the power to transform how social service agencies work to move individuals out of poverty. Instead of merely providing participants with resources, these agencies can focus on structuring interactions with participants in a way that maximizes their self-determination, builds skills, and ultimately leaves them better prepared to function independently. The goal of a coach is to work with participants to a point where they no longer need the coach — or the social services.

Tina used to feel overwhelmed by all she had to manage. Struggling to raise two kids on her own while attending community college, she was unsure of her future. The constant, overwhelming stress left her feeling powerless. As she said, “You have kids, and you work, and you’re the head of your household, and you have bills to pay, and this and that…How do you keep it all [in your head] without feeling like your mind is so cluttered? It’s almost easier to not do anything than to think of all these thousands of things you have to do.”

For Tina, working with a coach has helped her to move forward tremendously. Tina’s coach has helped her recognize her own abilities and helped her to develop a belief in herself. Tina’s coach also has helped her parse “all these thousands of things” into manageable pieces, and focus on concrete steps that will move her toward her goals. She now knows how to break down big goals. As she noted, “the only way you can keep yourself from going crazy is to not think about the big stuff, and focus on one little goal at a time.” She also credits the program with helping her improve her organizational skills, saying, “I never had a planner before…but ever since I’ve been in this program I live by a planner.”

Tina’s coach has helped her to chart a clear path to a brighter future for her family. “It’s one thing to realize what I need to do,” Tina says. “It’s another thing to have a resource to kind of guide me through how to do it.” Importantly, her work on her own goals has impacted her entire family. Tina continues, “the word ‘goal’ is now a part of our vocabulary. My kids and I are always setting goals.” Today, Tina has successfully decreased her debt, increased her savings, and has a good-paying job at a law firm. She has significantly improved her relationship with her kids — one of whom is now in college — and is saving to buy her own home.

It is important to note that coaching does not work on its own. Coaching can’t create opportunity for people in poverty; it can only help those people make best use of the opportunities that exist. Tina was able to succeed in part because of coaching, but also because she was able to access a community college education and financial aid, and because there were good-paying jobs available when she completed her training. Higher wages and more stable work hours, better policies to support families (including paid leave and subsidized childcare), and affordable and safe housing opportunities are all key structural supports necessary to help low-income families move ahead. While those who provide services for low-income families should consider incorporating intentional coaching relationships into their programs, they should also remain committed to meaningful structural change that will move all families ahead.

Learn more about the power of coaching from the Crittenton Women’s Union report “Coaching for Economic Mobility.”