The Aspen Institute’s 2018 Symposium on the State of Race explored a range of perspectives on the political narratives of race in America through an open discussion among journalists, thought leaders, and political strategists. Panelists fleshed out the voter engagement strategies of US political parties and examined how best to approach a relevant and sensitive subject: hate speech at the intersection of race, social media, and free speech.

Before the panelists sat down to discuss the role of race in politics, Alexis McGill Johnson spoke to the power of neuroscience in understanding how people develop and break down racial stereotypes. Johnson, the executive director and co-founder of Perception Institute, explained the ‘fairness paradox’ present in American society. The ‘fairness paradox’ shows how those who value fairness in theory may not be practicing it in their daily lives. Johnson described how our cognitive functions rely on perception and schema (patterns of thought and behavior that our brains develop to synthesize the sensory information that they receive), and that the concepts of colorblindness, objectivity, and meritocracy ultimately fail to account for the systematic racial disparities in our society.

Colorblindness is the idea that, in order to maintain objectivity, one can overlook the nuances of another individual’s identity such as race, class, or gender. But it fails to account for the implicit biases that we subconsciously harbor based on our own social identities and the cognitive functions that allow us to navigate the complex social realm. Johnson argued that relying on colorblindness to maintain fairness causes racial anxieties. She described these anxieties as “a stress response linked to cross-racial interaction prompted by a mismatch between believing in colorblindness and how our minds work.”

The mismatch between colorblindness and cognitive perception mirrors the conflict between the idea that we live in a fair and just society and the racial, class, and gender disparities present in that same society. Johnson suggested that in order to “delink stereotypes from our cognition,” we should practice individuation by actively focusing on the individuals in our lives and paying attention to the qualities and attributes that make up their individual identities.

Following Johnson’s lecture on combatting implicit bias, the first panel launched into a discussion on civic engagement. Their discussion highlighted how the strategies that political parties use to garner support from constituents are colored by voters’ racial and cultural identities.

Irene Bueno, co-founder and partner of the Nueva Vista Group, addressed the ways in which Asian Americans interact across generational and ethnic differences. Bueno, who was joined on the stage by fellow policy strategists Chuck Rocha, Kamilah Pierce, and David Brooks, argued that Asian Americans are underrepresented as a constituency whose needs and concerns are as varied as their backgrounds.

In fact, this was one aspect of civic engagement that the panelists agreed upon: that no constituent represents a single identity — generational, educational, religious, cultural or racial identity, gender, or class. Echoing Johnson’s argument of the importance of individuation, the panelists acknowledged that in order to understand what voters respond to, policymakers and their advisers must speak to a diverse set of concerns across their constituency and make greater efforts to engage with these communities.

The second panel took the discussion a step further, addressing the roles of political entities and social platforms in tackling racialized hate speech. They described the way in which prejudicial and racist attitudes against communities are not simply reflected through online hate speech, but also as a result of hate speech.

As Suman Raghunathan, executive director of South Asian Americans Leading Together (SAALT) described during the panel, when rhetoric becomes policy it serves as a “call to action” for violence against people of color and other marginalized communities. Marc Lamont Hill, a political contributor for CNN, went on to describe how the transformation of fear and frustration through speech into a political tool of action mainstreams white nationalism and other radical movements.

According to Carlos Monje, director of public policy, US and Canada, for Twitter, it’s a phenomenon that social media platforms have witnessed and struggled to navigate. These platforms have started the process of carefully adapting their policies to protect freedom of speech while discouraging and condemning the abuse of speech against individuals and communities.

“The open question of the day seemed to be whether we, as a culture, will have the grace to face our racial issues head-on or if we will die on the pyre of the old American racial order,” said Seema Rao, one of the event’s social media ambassadors. Within the current political climate, it’s difficult to predict how society will evolve in the coming years, but one thing is for sure — discussions like these must continue in order to form a more inclusive union. 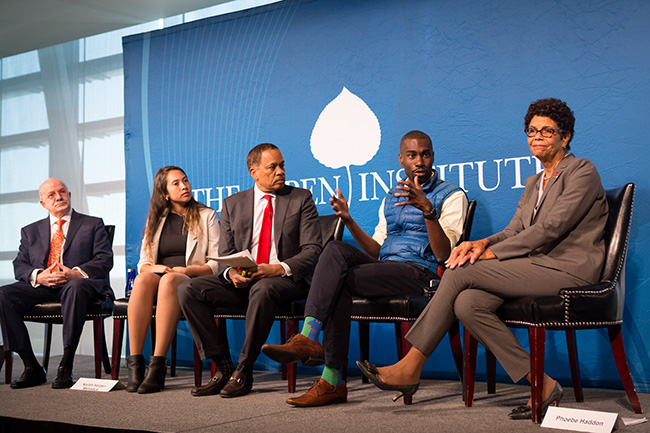