For at least a while yet, I can still claim to have spent more time in business than in politics. I have launched businesses, failed at a few of them, and was fortunate to have gotten-in on the early days of the cellphone industry. Later, as an investor, I sat through enough pitch meetings to fill five seasons of “Shark Tank.”

For the past several months, I have really been drilling down on the dramatic changes taking place in our economy, in the workforce and in the workplace. The U.S. workforce is increasingly composed of freelancers, independent contractors and the self-employed. These are among the most dramatic and dynamic transformations in decades. Virtually nobody else in Washington is talking about this yet. And we’ve got to make sure this doesn’t get captured in the partisan divide: Democrat vs. Republican or liberal vs. conservative; I don’t believe it’s on those metrics. It really is much more future vs. past, and that’s how we ought to be thinking about it. 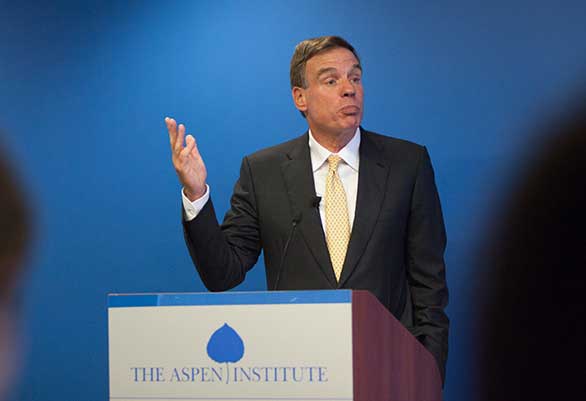 How big is this phenomenon? The GAO put out a study saying it’s somewhere between 5 and 47 million. McKinsey says that up to 53 million fit into the broader category of ‘contingent workforce.’ If up to a third of American workers are now engaged in some way as an independent contractor or contingent worker in the gig economy or 1099 economy, something big is happening.

I spoke with Brian Cheskey, the CEO at Airbnb — which by the way has more rooms and a larger market cap than Marriott — who has a kind of mind-bending thought that amongst the millennials, their idea of success is not ‘own a home, two cars and if you do really well maybe get a house on the lake.’ Their idea is sharing these items and collecting experiences, protecting their information and having a whole different approach to what is viewed as success. If that proves to be the case, then a legal and political structure built around ownership really may need to be rethought a little bit. And the beginning of the gig/on-demand/1099 economy may be the forebear of what’s to come.

People are connecting with new kinds of job options through digital platforms. Today, online platforms such as Airbnb, Uber, Lyft, TaskRabbit and Etsy can provide granularity in matching supply and demand for things many people may never have thought about monetizing before: A spare room. A ride. Free time.

But, since many of the business models in this on-demand economy are built on the premise that workers are independent contractors, not employees, that means companies do not have to pay costs such as health insurance or retirement benefits. They also typically do not pay a share of unemployment or workers’ compensation coverage.

So the challenge with this economy is that even if you’re doing really well, you’re on a high wire without a net. That may work for many of them — until the day that it doesn’t. That’s also the day that taxpayers could be handed the bill, which is why Washington needs to start asking some tough policy questions.

How do we think about this in a way that maintains the freedom and flexibility and innovation, but still recognizes that there needs to be some level of social contract?

The biggest challenge may be this change in the employer-employee relationship. Are there other options for providing safety-net benefits to workers who are not connected to a traditional full-time employer? Who should administer them? Should they be opt-in or opt-out?

Part of this phenomenon is taking place because of — love it or hate it — Obamacare has given people the ability to have health care that is not tied to their employment.

So as we look at traditional state-run social programs, we could look to the Affordable Care Act’s health-care exchanges as a public-private model for these benefits. We could perhaps borrow the idea of the “hour bank,” used by the building trades for 60 years, to administer benefits for members who work for a series of contractors. It could be consumer driven in part, too — perhaps allowing customers to designate a portion of their payments to go to a fund that helps support workers. There are also public-private models that deserve a look, and options that would allow companies to provide more information and services to partners who use their platforms to earn money.

You don’t want to squash the innovation, but as I talk with people working in the on-demand economy and even CEOs, they do realize there needs to be some policy prescriptions. We don’t want to come in heavy handedly but we also don’t want to default to 100 different litigation cases all across the country. I do think this is an area where we have a moment before it gets polarized where we can get ahead on the policy work in collaboration with the people who are doing the innovation and with the people who are working in these companies.

Next, the federal government needs to become much more nimble. We need better data on how many people are part of the gig and sharing economies, and we need to recommit to extending broadband Internet service to underserved and unserved regions. We should also streamline the hodgepodge of federal programs — currently scattered across dozens of federal agencies — meant to support innovators and entrepreneurs. And it shouldn’t take three years — three years! — for federal regulators to issue rules on equity fundraising on the Internet.

And we also cannot forget the opportunity costs of this generation’s combined $1.2 trillion in student debt, which is limiting options for young workers.

Finally, the millennial generation already is beginning to fuel a tremendous shift in one of the traditional anchors of America’s economy. Many younger Americans have made it clear they prefer sharing and renting over ownership. This could have a huge impact on traditional tax systems at every level of government, because we currently use the tax code to reward ownership of everything from homes to vehicles to factories.

Barely five years ago, no one had even heard of Uber or Airbnb. And while we don’t know what the disruptive technologies of tomorrow might look like, we know developments such as driverless cars, same-day drone deliveries and 3-D printing appear to be right around the corner.

This kind of innovation is not going to disappear. We ought to support it and encourage it, but we need to recognize there needs to be that safety net. The vast majority — on both the business side and the working side — want to get it right. What gives me hope is that the coolest thing about the millennial generation is that they want to work for and do the right thing. The idea that we can fashion policies that lean into this 21st century thinking is extraordinarily exciting and — at least at my day job — exciting things don’t always happen.

Instead of trying to make the new economy look more like the old, Washington should encourage these innovations and work to create more opportunities and upward economic mobility for everybody.

Senator Warner delivered these remarks at the Aspen Institute Economic Opportunities Program “The 1099 Economy: Exploring a New Social Contract for Employers, Employees, and Society,” part of the Working in America discussion series. Full video of the event is available now.