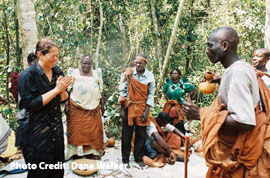 In 2005, I went to Africa to do research for my latest one-woman show Let Me Down Easy. The play is about resilience and vulnerability: physical, spiritual, and political. The play pivots, in part, around issues to do with medical care. It is based on interviews that I then turn into a one woman show in which I portray several characters. To create Let Me Down Easy, I conducted over 300 interviews on three continents.

In the current production, I portray 20 people, the majority of whom are American. However, when I conducted my research, I was concerned by images I saw of Black African people in distress in major U.S. publications. Were these photos engendering action, or merely pity or worst apathy? I thought I would go to see for myself: How dire were the situations? Was there more than the camera captured? Read the full article at Huffington Post.