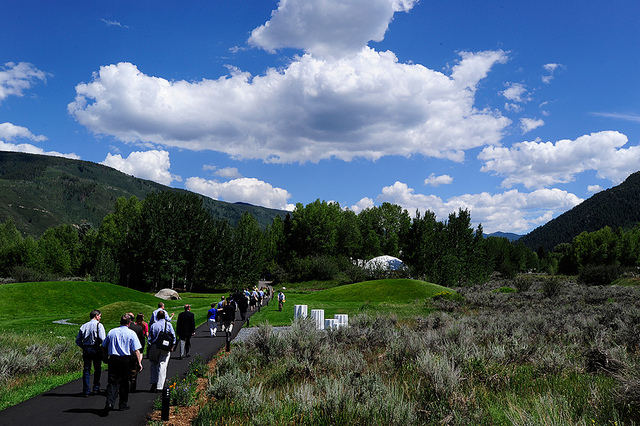 As an optometrist in New York City, Henry Crown Fellow Jordan Kassalow observed that the livelihoods of millions of men and women in places like India and El Salvador depend on good eyesight, making access to simple eyeglasses a matter of survival. But he didn’t just talk about it. He built VisionSpring.

From his desk at Microsoft in Seattle, Africa Leadership Fellow Patrick Awuah observed conditions in his home country of Ghana and decided that it needed a new generation of leaders, grounded in integrity and service. But he didn’t just talk about it. He built Ashesi University to nurture a new generation.< And from a small rural town in California’s Central Valley, Resnick Fellow Alesha Hixon observed most of the town’s children entering kindergarten not ready for school. She didn’t just talk about it. She built the Lost Hills Family Resource Center.

The world is full of opportunities for great entrepreneurs to step up and lead. At the Aspen Institute, through the Fellowships of the Aspen Global Leadership Network, we help them to do just that by providing the space for deep self-discovery and the inspiration for action.

This summer, we are taking this idea to a new level with a major new annual event, the “Aspen Leaders Action Forum” taking place July 29-August 1. Its goal: to assemble some of world’s most entrepreneurial leaders and inspire them to step up, to move from “ideas to action” and to take on some of society’s greatest problems. All of those attending – we anticipate 350 each year – will share a common thread: They are “doers” – men and women who have committed to making a positive difference in the world.

Woven throughout the design of the entire event is programming designed to create open dialogue, build trust, and lead to action.  The program includes inspiring readings-based seminars, interactive roundtable discussions on leadership, intensive networking opportunities and “Action Workshops” offering help to those facing hurdles as they tackle challenges in their communities, countries and the world. There is no other event designed to spur such a highly talented, global group of leaders to do something about the world’s challenges.

The majority of attendees will be drawn from the Aspen Global Leadership Network — currently numbering 1600 leaders from 46 countries. This network has been growing for over 15 years, ever since the creation of our flagship leadership program: the Henry Crown Fellowship.  Leaders enter the program having demonstrated a great deal of personal success. They leave it inspired to make a greater mark on their communities and the world; to move, as we say, “from success to significance.” In between, they are provided with an intimate forum for deep introspection, probing dialogue and interactive problem-solving.

Inspired by their experience, many Henry Crown Fellows were moved to bring this proven program to their own regions or issues they were working on. As a result, some 14 Henry Crown Fellowship-inspired programs in Africa, Central America, the Middle East, India, China, and other parts of the world, as well as in critical social areas such as education, the environment, energy, and politics, have been launched. Together, they form the Aspen Global Leadership Network.

Joining them at the Action Forum will be other great entrepreneurs we’ve invited from places like Goldman Sachs’ 10,000 Women and 10,000 Small Businesses initiatives, Visa’s “Everyone. Everywhere” program, Echoing Green and more. Still others will come from Aspen programs like our First Movers and ASCEND Fellowships as well as from our partner Aspen Institutes in France, Spain, Romania, and beyond.

With all of these phenomenal leaders primed to “step up and do even more,” we now want to connect them to one another, and to other amazing leaders through a purposeful program designed to inspire and nudge them to greater impact. And that’s what the Action Forum is all about.

The whole event would have been impossible without the major sponsorship of the Resnick Family Foundation. Lynda and Stewart Resnick loved the idea of building a flagship summer event focused on action.  It fits, after all, with their own efforts to build great schools, clinics, youth centers and leaders in California’s Central Valley.  Many of the local leaders they support will also join the Action Forum.

As part of moving from “thought to action,” participants joining us have already begun to make Action Pledges. Here are just a few:

SYLVIA GEREDA, Director of Informe Especial, Canal Antigua (Guatemala): will use journalism courageously and without fear to give a voice to the voiceless.

JORDAN KASSALOW, Co-Chairman of the Board & Founder for VisionSpring (United States): will ensure 525,000 people gain access to affordable eyeglasses in 2013.

YOAV VENTURA, Vice President, Planning & Strategy for UoPeople (Israel): will open the gates to free education for thousands of students across the world.

This first annual gathering will offer invaluable insight for the Fellows gathered. We hope to inspire others to move “from success to significance” as well through the public programming built into the event and through the livestreaming of select sessions. Find a full list of the participants and public programming at the Aspen Leaders Action Forum website, aspenleaders.org, and consider how you, too, can take on the most pressing issues that face your community, country or region.