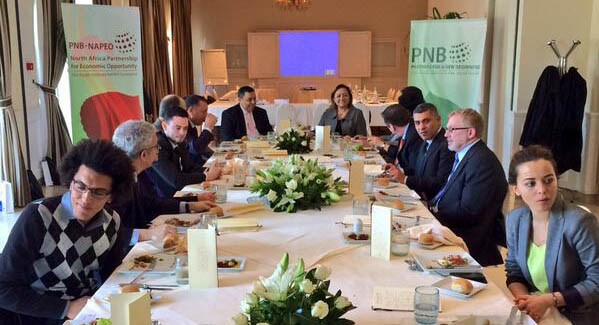 Above, members of the Partners for a New Beginning North Africa Partnership for Economic Opportunity delegation meeting with the US ambassaor to Libya. (Photo Credit: Chris Westling)

Russell Beard is vice president of information resources and CIO at Bellevue College in Bellevue, Washington. Here he writes about his experience as part of the Aspen Institute Partners for a New Beginning North Africa Partnership for Economic Opportunity delegation to Morocco, Algeria, and Tunisia (including a visit from a Libyan contingent), where he spoke about partnerships and opportunities to advance these countries’ higher education sectors.

I left Seattle on a typical late January afternoon. I was about to fly farther from home than I had ever been; I was flying to a place I had never conceived of going to before. So many emotions rolled around in my mind, so many questions. At some point in Paris, while waiting for the next leg to Algiers, I decided I was going to abandon all questions and all expectations. I understand higher education, I have spent the last 14 years of my life dedicated t 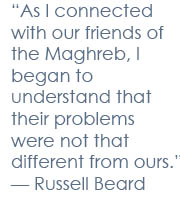 o it, which has always been ironic since my own education is not what they would say measures up. But here I was, part of a delegation asked to speak with four North African nations about partnerships and opportunities to advance their higher education sector. The delegation was organized by the Partners for a New Beginning North Africa Partnership for Economic Opportunity at the Aspen Institute, a public-private partnership aiming to foster job creation and entrepreneurship in North Africa.

So it began, seven days that would change my life, shake everything I know and open my eyes to the incredible beautiful world around us. This trip took us to Algeria, Morocco, and Tunisia, including a visit from a delegation from Libya in the city Tunis. This is what I learned.

I learned what being humbled really means. Over seven days, we attended approximately 24 meetings with private and public sector representatives, ambassadors, educators, and people who just wanted to help their nations move forward. In each and every case I learned just how much I didn’t know. Every meeting was planned with a great amount of anticipation and with high expectations as to our arrival and input. It was crystal clear to me that the people I met saw us as a source of hope, bringing answers to the challenges they are facing in moving their nations to global participation. In us they saw the American dream. All too many times, I felt inadequate and challenged to set reasonable expectations for this visit, but in the end I was simply humbled.

As I connected with our friends of the Maghreb, I began to understand that their problems were not that different from ours. Each nation has a different set of values and resources to bring to the table. I saw many opportunities for partnerships and some specific ways we could help them move forward, many in the field of technology. They have an opportunity to learn from our mistakes and advance their technological means exponentially based on that knowledge. It would be very easy to dedicate the rest of my career to seeing that happen, but something even bigger struck me after I returned.

I believe the greatest potential exists in the partnerships we could form in student and faculty exchanges. However, while I have absolutely no doubt that Algeria, Libya, Morocco, and Tunisia are poised and ready to make this happen, I question if we, the United States higher education system, are ready. It is a certainty that having robust international student programs is something we are very good at. But are we ready to “collaborate?”

In all of my experience, higher ed international student programs are about revenue. That may sound like an over generalization, but if we are really honest with ourselves, we know it’s true. Students from outside our nation are recruited for their ability to pay the inflated tuitions of international programs in addition to providing their best and brightest. This approach has provided many students with the chance to attain a US education, but what it hasn’t done is allow us to be shaped, molded, or impacted by the culture and incredible wealth of human capacity of those students coming to us from abroad. I would propose that in this lies the value of what we could establish from this exploration of the Maghreb.

This is an opportunity to form bonds with these nations that can change generations. Not only should we be bringing large groups of their students and faculty over to the US, but they should be representative of the nation in which they live. Not just the rich and brilliant, but the creative, the hard wor 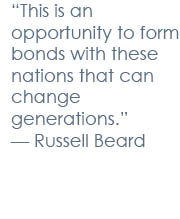 king, and the one who may have otherwise slipped through the cracks. In the same way we should be sending broad representation abroad as well, to discover the similarities and discover how we can complement and strengthen each other. For the nations we visited there could be no better time than now to consider this type of an approach. Tunisia just established a new government, Libya is in that process now, and Algeria is quickly discovering what their future can be as well.

I sat next to a man who was held captive by the Gaddafi regime for 46 days and I saw no bitterness. I saw nothing but hope. I spoke with a brilliant lady as she translated for us and listened to her hope for her Tunisia; she has lived through a revolution and watched a new government that insists on women’s rights take power and her passion for her nation inspired me beyond words. If there ever was a time or place that the US could contribute and the US could learn… the time is now.

I fell in love with this region. Algeria, Morocco, and Tunisia are some of the most beautiful places I have ever seen, but their people are even more beautiful. Their love of their fellow compatriots and selfless devotion to the prosperity of their nation is something I have never seen before. There will always be a part of my heart gazing at the coast of the Mediterranean in Tunis. I will forever walk the beautiful crowded streets in Algiers and I will always hear the haunting beauty of the call to prayer in Casablanca. I know for a fact that most of my fellow Americans know as much about Maghreb as they learned from the movie, “Casablanca.” That is but a small bit of proof that the best kept secret in the world is beauty that lies in North Africa.

I am very grateful that I walked into this without an agenda or expectations. My new, dear friend Ouiem described the different nations that were “courting” Tunisia, and she reflected that those who just listened would learn. I learned so much and yet I have so much still to learn. I know this: being a vice president at a prominent Washington state college doesn’t mean anything if I am not ready to do something with that position.