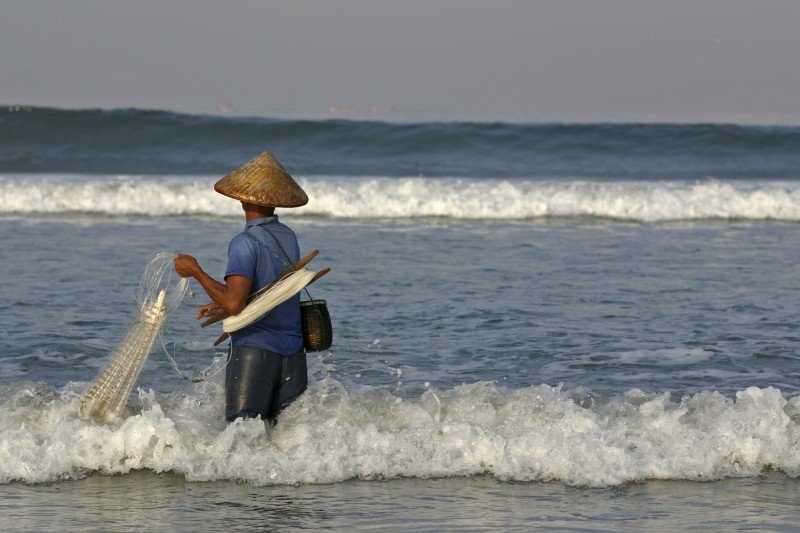 Brett Jenks is president and CEO of Rare and an Aspen Global Leadership Network Fellow (AGLN). He is one of four 2015 McNulty Prize Laureates. Below, Jenks explains why telling fishers to stop overfishing doesn’t work and shares a more effective way of curbing it.

Like the old anti-drug campaign, it turns out that telling local fishers to “just say no” to overfishing doesn’t work.

1. Those who prioritize Marine Protected Areas (MPAs), i.e., those who say, “Let’s set aside 30 percent of the ocean, and keep fishers out.”

2. Those who want to regulate fishing: “Fishers can’t be trusted, so let’s regulate them.”

An ambitious initiative called Fish Forever avoids these distinctions, and instead aims to unleash the self-interest of fishers so they can create their own protected areas and design their own fishing regulations.

The Philippines is starting to offer some terrific examples of Fish Forever at work. Consider the story of 79-year-old Manong Cito, who has been fishing in the waters just off the shore of Ayoke, a small island in Cantilan, Philippines, since he was a child. For years, Cito rose before the sun to fish with his brother, piling simple fishing gear onto his boat and setting out toward seas teeming with fish and mollusks. That’s how Cito remembers the 1960s: spending most of his days half-immersed in an ocean full of life. Throughout the 1980s and 1990s, however, conditions changed: a booming population and climbing demand for fish led to overfishing — worst still, cyanide and dynamite fishing proliferated as the fishers got more desperate.

In 2005, the government turned to a well-proven solution, establishing a Marine Protected Area in Ayoke in an attempt to boost fish stocks. Fishing was outlawed in this area. That’s where the problems usually begin for coastal fisheries. Though Cito also wanted to restore the fishery, his neighbors continued fishing in the reserve. So he followed suit.

“Why follow the MPA rules, when some are not?” he asked. This is the tragedy of the commons most coastal fisheries experience today. How can an MPA function if local people have no incentive not to fish in it?

Clearly, “just saying no” doesn’t work for the oceans either.

Overfishing is a global issue. Small-scale fishing is a big deal: it represents about 50 percent of the fish that humans consume. One billion of the world’s poorest people depend on fish for their animal protein every day. As human populations increase and demand for fish climbs, local fishers are caught in a race to catch declining fish stocks. This vicious cycle is fast becoming one of the most critical threats to ocean health, not to mention to those millions of people.

So what’s the alternative? Fishers like Cito aren’t the enemy; they are a critical stakeholder and a positive force to be harnessed. We can’t tell fishers not to fish. But we can enable them to be part of a very promising solution.

My organization, Rare, in partnership with the Environmental Defense Fund and the University of California, Santa Barbara, launched a global initiative called Fish Forever, which empowers coastal communities in developing tropical countries to restore their small-scale fisheries. Rather than pitting fishers against MPAs, Fish Forever is finding common ground, integrating MPAs and sustainable management into a single approach.

Through its TURF+Reserves model (territorial user rights for fishing paired with marine reserves), Fish Forever partners with local governments to give fishers exclusive access to their local waters. This turns the ocean into a renewable asset — a kind of natural annuity — one that fishers value and commit to managing. In exchange for these exclusive rights, local fishers set up marine reserves in areas where fish grow and reproduce, and spill over into the nearby fishing waters. This way local fishers accrue the benefits of their own marine protection.

Currently, Fish Forever works in five countries: Belize, Brazil, Indonesia, Mozambique, and the Philippines. In Brazil and the Philippines, these efforts are the near-shore element of Bloomberg Philanthropies’ Vibrant Oceans Initiative, which is working to address both small-scale and industrial overfishing. Next year alone, Fish Forever will engage more than 50,000 fishers and 5 million people to protect 13 million acres of near-shore waters.

If you ask Cito and his community, this is a hugely promising idea. In late August, Cito’s municipality of Cantilan became one of the first two communities in the Philippines to launch a TURF+Reserve system. Cito, his community, and the hundreds of fishers who helped design this system are proud of their efforts and eager to sustainably manage their waters. These fishers have stepped up to become the stewards of their environment. And the good news is they will get paid for it. In fact, the better their management, the more they get paid — whether in the amount of fish they catch or actual profits.

This is as it should be. There’s no reason for marine protection to come at the cost of the people who most depend on the ocean.