With the energy of a preacher and the conviction of a politician, noted spiritual author and lecturer Marianne Williamson recently addressed a capacity crowd at the 410-seat Paepcke Auditorium at the Aspen Meadows campus in Aspen, Colorado. Williamson spoke at the Aspen Institute as a featured guest of the Murdock Mind, Body, Spirit series. Running for a seat in the US House of Representatives from California’s 33rd Congressional District, she repeatedly spoke about the need for social and political change in America — a movement, she said, from which the spiritual community should not be exempt.

“Spirituality has been the foundation of every great social movement in the United States,” Williamson explained, using the examples of Quakers in the abolitionist movement and Rev. Martin Luther King, Jr., and the Southern Christian Leadership Conference in the civil rights movement.

It all begins within an individual’s or collective’s conscience, said Williamson, the author of ten books, six of which have been New York Times best-sellers. Those spiritual leaders, using their own internal compasses as a guide, found that certain conditions were morally unacceptable, and that gave them the moral authority to act, she offered. 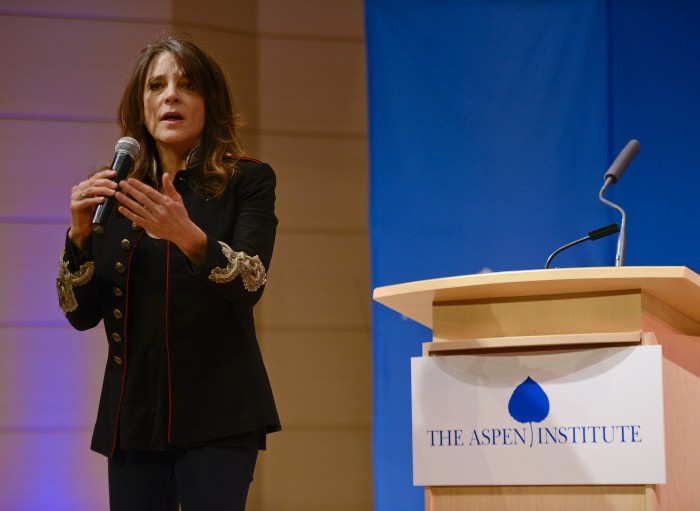 “When people say ‘politics is so unconscious,’ if those of us in the higher-consciousness community don’t put that in the political realm, how can we complain it’s not there?” she said, noting that she herself has been told frequently that she is “too spiritual” to get into politics.

Responding to an audience question about what those who are not in politics can do, Williamson said that democracy means everyone is “in politics.” “If we leave it into the hands of what we call a political class, we can call it a lot of things, but it’s not democracy,” she said.

And Williamson urged the gathered to move from the edges of issues to greater action, pointing out that while Americans have a reputation for apathy, they’re also known to be quite effective when the sleeping giant awakes. “You can’t change the world over white wine and brie,” she said. “There’s a limit to what we can do from the sidelines, from online petitions, from talking about it, and talking some more. We know and now we must do. The world cannot wait for us to become enlightened masters.”

Asked why she decided to run for public office, Williamson said the impetus came from her own internal guidance system and a yearlong period of inquiry with family, friends, and herself. “It was an itch that wasn’t going away, a mosquito in my ear that I couldn’t get rid of,” she said. “I didn’t want to risk reaching 75 and missing out on everything I could possibly do.”

Though she didn’t delve deeply into specific political issues during her talk at the Aspen Institute, Williamson champions the empowerment of women, fighting poverty, and campaign finance reform among other causes. She is the force behind Sister Giant, an educational movement that encourages women to run for public office, and is a proponent of establishing a federal department of peace. Of the Citizens United decision and a similar current Supreme Court case, Williamson believes that, “We need to get the money out of politics and that’s the greatest moral challenge of our generation.”

Williamson emphasized the importance of working together for the collective good. “We exist in relationships,” she said. And the problem is not that there are greedy, selfish people in power who do not subscribe to this theory, but that we don’t do enough to harness the power of people who do have the collective good at heart. “What is possible is imminently feasible,” said Williamson. “The spiritual community is not the kind of people to be sitting in background. We need to be leaders in the transformation of this world.”

Williamson concluded the evening by leading the audience in a prayer for the local community, which is struggling with some recent suicides and the murder of a well-known Aspen native.