In Santa Barbara, California, an inmate dissatisfied with his jail cell can now purchase an upgrade for $82 a night. In North Carolina, the non-profit Project Prevention offers drug-addicted women $300 to be sterilized. In Switzerland, the government recently considered offering residents of a small community $2,000 per year to allow a nuclear waste site to be built nearby. These and other examples colored Harvard professor Michael Sandel’s query to the crowd at the Institute’s Ideas Festival—are some things too sacred to be sold, and if so, what do we lose when we sell them? 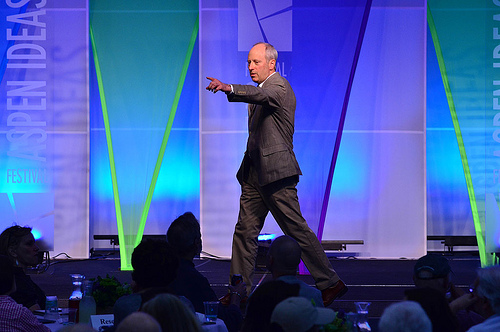 For anyone who has followed recent education reform debates, paying students for performance was an obvious jumping off point. “Major school districts are trying to motivate students to achieve academically through the use of cash incentives, and offering money for high scores on standardized tests,” Sandel said. “Some offer third graders $2 for each book they read, to try and motivate kids from disadvantaged backgrounds to work hard.” He asked the audience to imagine whether they would try paying students as superintendents of struggling districts. The crowd was split.

“Paying children to read communicates that the only things worth doing are those that earn money,” one woman said. “There’s something you gain from reading a book that is not measurable.” Another dissenter argued that “there must a way to engage students with good teachers, and good parents. If kids read just for money, then they’ll learn not to do anything unless they get paid for it.”

But not every district and child has the luxury of good teachers and good parents. “Cash rewards might provide an incentive to someone who has never read a book to get them involved, and then hopefully they wouldn’t have to get paid later on,” one proponent said. And the appeal of bribery ran all the way to the other end of the economic spectrum. “Nothing I could do would get my son to go to his Mandarin class,” one self-described “Manhattan Alpha Mom” lamented. “A dollar a day, and he takes his Mandarin quite happily.”

Right or wrong, what consequence the practice, and what lessons can we export to situations with higher stakes? “Buying and selling a material good do not change the quality or character of the good,” Sandel said. “But the same may not be true when we’re talking about non-material goods such as teaching and learning, or appealing to civic virtue. Contrary to standard economic reasoning, markets are not always inert—sometimes they even transform the character of the goods being bought and sold.”

Sandel illustrated this refutation of the monetarists’ model with the story of daycare center in Israel that tried to trim the numbers of chronically late parents by imposing fees. Contrary to the assumption that when cost increases, demand declines; the number of parents picking their children up late ballooned. Why? “Before, when parents came late, they felt they were imposing a burden on the teachers. Now, they felt they were hiring a babysitter, that the fee was being given in exchange for a service,” Sandel said. When the daycare center tried to drop the fee, people still came late, “which suggests that once a sense of civic virtue is eroded, it’s not so easy to reinstate.”

Our growing willingness to solicit cash from those who can afford it to insulate themselves from the unpleasant facets of life can be seen from everything from skyboxes at baseball games to the children of the poor who disproportionately fight the nation’s wars, Sandel said. “This ultimately isn’t even a satisfying way to live for those of us who inhabit the skyboxes. Democracy does not require perfect equality, but it does require that men and women from different spheres encounter one another in the ordinary course of life. The question of markets is not mainly one of economics— it’s one of how we want to live together,” he said. “Do we want a society where everything is up for sale, or are there certain values money cannot buy?” From jail cell upgrades to Mandarin lesson bribery, society is begging the question, and whatever the answer may be, it isn’t up for sale.