The national discussion on a raised minimum wage, currently mandated at $7.25 on the federal level, is growing. Although the US economy has improved since the Great Recession, many Americans are still left behind in its wake. In many sectors, particularly the service industry, earning a minimum wage continues to sentence families to a life in poverty. At the forefront of the discussion is the question of how to take workers’ and leaders’ frustrations and turn them into effective action.

Maureen Conway, director of the Aspen Institute Economic Opportunities Program, moderated a book talk with labor union organizer and author David Rolf, and led a discussion with three labor leaders, in a conversation about how labor rights activists are combatting wage inequities and improving basic employment standards in the United States. Conway and Rolf discussed Rolf’s new book, “The Fight for $15: The Right Wage for a Working America,” and his labor rights success in Washington state.

The work positions offered at airports have devolved from middle-class jobs to lower-class jobs in the course of a generation.

One of Rolf’s challenges a few years ago as a union leader was combatting poverty-level wage levels and poor employment benefits and conditions in SeaTac, a small town that surrounds the Seattle-Tacoma International Airport in western Washington. According to Rolf, the work positions offered at airports have devolved from middle-class jobs to lower-class jobs in the course of a generation. This is due, in part, to the way employees are hired and managed, as actual airport workers often don’t work for the airlines. Instead, “they work for an alphabet soup of no-name subcontractors that bid against each other in a race-to-the-bottom on price,” he explained. Due to existing labor laws, it was difficult for the airport workers to unionize and demand living wages.

Rolf used the example of a US Army veteran living in poverty, who commuted 45 miles each day to the Seattle-Tacoma Airport to fill jet fuel tanks for a minimum wage. When he went to argue his case to the local government, he and his coworker were told to leave because they were bringing hazardous materials into the building. What were these materials? The jet fuel on their uniforms, from the low-wage jobs against which they wanted to speak out.

“The 40-year war on the American middle class has, in fact, paid off well for those who influenced it.”

In response to these challenges, Rolf and his team brought the issue directly to the people. In 2013, they put the issue of the minimum wage on SeaTac’s ballot. As Rolf detailed, workers and labor activists “knocked on 10,000 doors, 40,000 times” to pass Proposition 1, which mandated a $15.00 minimum wage, paid sick leave and other key employment standards for workers in SeaTac. At its core, Rolf’s fight was for equity. “The 40-year war on the American middle class has, in fact, paid off well for those who influenced it”, Rolf said.

While not everyone in SeaTac agreed on the issue of raising the minimum wage, everyone had an opinion. Rolf referenced an opponent, an owner of a local hotel, as saying, “If this passes, I won’t be able to offer my workers shift meals … and some days, that’s the only meal they get!” It was clear that regardless of the arguments against a raised minimum wage, the people of SeaTac were struggling. In November 2013, the labor activists won, passing Proposition 1 by just 77 votes.

Former opponents, such as the hotel owner, soon changed their tune, and advertised their new wages to potential employees. Rolf references the hotel owner as saying, “It turns out [guests] value customer service.”

“I can’t let someone be like that, working themselves to death, knowing that they could change their situation.”

Three labor leaders who had directly worked on Rolf’s other initiatives in Washington and California also took the stage to share their stories and opinions. Tanika Aden spoke about how she joined the labor movement after entering the homecare sector. “I know a lot of people everyday who have to make the decision to pay their bills, or whether to eat,” she said. Together, the labor leaders explained how without higher wages families could not survive.

When asked by her peers why she would put so much effort and energy into fighting for others, Aden explained, “I can’t let someone be like that, working themselves to death, knowing that they could change their situation.” It is union organizers and labor activists who are fighting for these changes and, according to labor activists, it is a raised minimum wage that is going to make the difference millions of workers deserve.

This event was part of the Working in America series, an ongoing discussion series that highlights an array of critical issues affecting low- and moderate-income workers in the United States and ideas for improving and expanding economic opportunities for working people. We are grateful to the Ford Foundation, the F.B. Heron Foundation, the Hitachi Foundation, the Charles Stewart Mott Foundation, the Prudential Foundation, and the Wal-Mart Foundation for their support of this series. For more information, visit as.pn/workinginamerica. 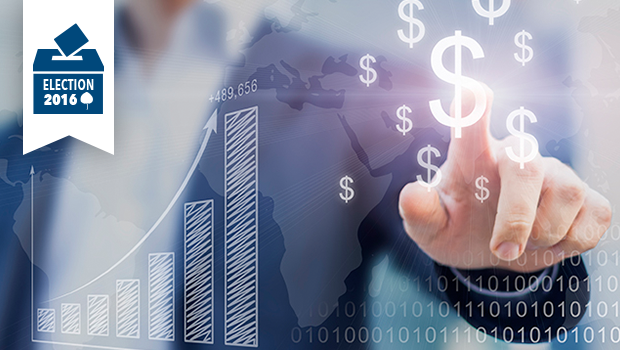 US Economy
Amid the Noise, an Opportunity for Leadership on Financial Security