More money in politics has always been a boon for the Republican party. The fundraising advantage was an edge for Republican candidates against their Democratic counterparts at nearly any electoral tier. But over the past few years, radical deregulation has led to an era of mega-donors and unrestrained spending that has suddenly turned a seemingly undisputed Republican advantage into a strategic weakness, especially at the presidential level. 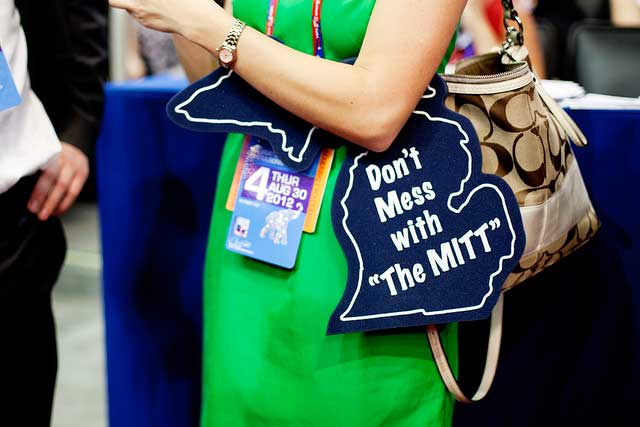 In 2012, Mitt Romney survived a long primary campaign to become the GOP nominee. This time, finding the ultimate winner could take longer. Photo from PBS NewsHour via Flickr and used under Creative Commons.

The GOP edge in political fundraising has been evident at least since the Truman administration despite the vast changes in party ideology, coalition loyalty, technology and indeed America’s social fabric. The basis for this advantage is the Republican party’s long standing support for the American business community. Since the New Deal, Democrats have been the party of unions, the working class and other groups whose ability to fund political campaigns, while not insignificant, pale in comparison to that of the GOP’s traditional allies. The Republican Party’s pro-business platforms and policies have left them with more wealthy patrons and thus with an advantage to gain by opening the doors for those wealthy patrons to donate larger and larger sums to campaigns.

Many Republican legislators pressed this strategic advantage by working aggressively in Congress and the courts to weaken campaign finance regulations. There are principled arguments at stake here, and many Republican lawmakers no doubt believe that by deregulating campaign finance they are protecting the free speech rights of citizens to express their political views unimpeded by needless limitations. But in politics it is especially useful when your principles match your political bottom line and improve your chances to win elections. Senate Majority Leader Mitch McConnell (R-KY) in particular has been a vociferous opponent of campaign finance regulation, filing several amicus briefs and lawsuits in the courts and participating in more than 20 filibusters against campaign finance regulation during his Senate career.

We have come to a point in American politics where the opponents of limitations on donations and campaign finance regulations have effectively won the battle. Five years after the Supreme Court’s Citizens United decision, there are essentially no barriers to unlimited political contributions. The Supreme Court continued to eviscerate campaign finance regulations with the McCutcheon decision that effectively ended caps on political contributions by individuals. (What’s worse, the Federal Election Commission has also been rendered basically toothless due to continued partisan gridlock over even minor questions of campaign finance violations.)

The results of the relatively rapid evaporation of these rules are continuing to unfold. The biggest change is more money in the system in general, particularly at the presidential level. Consultants and fundraisers working for both parties exploit the tattered regulations; we are now in an era of virtually unrestrained money pouring into the political system. Pundits predict that the 2016 presidential election will cost $5 billion dollars or more including spending from all candidates and their affiliated groups.

Another consequence of the weak regulations is the rise of a new class of mega-donors, individuals capable of giving candidates sums so vast they instantly become a force to be reckoned with — again, even in presidential elections. The early evidence points to more mega-donor dollar value donations going to Republican candidates rather than Democrats. Though a full picture of donations is impossible to analyze, a Brookings study that reviewed the available disclosed contribution records show that in 2012 mega-donors gave disproportionately to PACs working on behalf of Republican candidates. But interestingly, this is where the traditional advantage really starts to erode.

In the past, reasonably wealthy people would be courted by presidential campaigns early and often. But with the power of mega-donors to write multi-million dollar checks, all other fundraising targets take a back seat. Now mid-level fundraisers — the “bundlers” who donate a few thousand dollars and get all their friends to do the same — have been downgraded in favor of mega-donors. So instead of courting 50 or 100 people capable of giving $5,000 each, campaigns prefer to court one person who can give $15,000,000. This is especially true on the Republican side. As a former George W. Bush bundler put it, “What about when I get to the [Republican] convention? Last time, I was sitting in a box. This time, I may not even get a ticket!”

So, what’s the problem?  In some ways, this new fundraising scheme has eliminated the so-called “money primary.” Whether you were a Republican or a Democrat you would start out by declaring your intention to run for president. Then you would start raising money from bundlers and individuals and try to build momentum for yourself, leading up to the Iowa and New Hampshire primaries. In many cases there simply wasn’t enough cash to go around for more than two or possibly three serious contenders for the nomination. Once primaries started hitting, if you won, you could start acquiring other candidates fundraising support (people want to be on the winning team, after all) and keep building your momentum. Conversely if you performed poorly leading up to the primary or lost in the primary itself, you would be one of the candidates shedding donors as they jumped to other campaigns, eventually pushing you out of the race.

But in the mega-donor world, you don’t need a wide group of somewhat wealthy patrons, or even early primary success! It’s conceivable that all you’ll need is one mega-donor willing to back you, and he or she can keep you funded well beyond the viability you would enjoy as a normal candidate, even as far as the nomination. As one Republican strategist has said, “There could be as many as a dozen candidates that have a threshold amount of money in their campaigns and super PACs to compete vigorously in the early states.” In fact, there are so many possible candidates, and so few incentives for those candidates to drop out early, that the first Republican debates will be divided into two separate groups of as many as ten each based on polling data.

With so many candidates in the ring indefinitely, there is a strong incentive to aggressively court the more extreme and vocal base of the party to garner more media coverage in the only way possible when standing in a crowd. That often means a candidate will say politically divisive and occasionally outrageous things. While this may help boost a candidate’s visibility over the multitude, it certainly won’t leave him or her in a better position to appeal to the mainstream electorate and win a general election.

So now the blessing has become a curse. When the finer-grained donor momentum is taken out of the equation and everyone has relatively equal footing (based on a mega-donor underwriting their campaign), what induces a candidate to pull the plug on what would normally be a struggling campaign? What will make them put the goal of ultimate victory for the GOP above their own interests? The most significant remaining pressure for such candidates is internal coaxing from party leadership, a mechanism which fiercely-independent Republican candidates abhor.

What unregulated and outsized money in the system has wrought is a virtual guarantee that Republican primaries will be long, hard fought, focused on appealing to the Republican base and full of drama. We saw this play out in 2012 when a moderate and successful former governor, Mitt Romney, tilted hard to the right in order to secure the Republican nomination. The positions he took in order to become his party’s nominee cost him dearly in the general election. Some argue that a difficult primary is an important test for a nominee and leaves them better prepared in a general election. My guess is whoever emerges from this odyssey will be spending a lot of time explaining to moderate general election voters the statements they made to keep the money tap flowing from ideologically extreme mega-donors.

The power of money in politics in general and specifically on the Republican primary for the presidential election has already significantly altered the strategy and tactics of candidates. The 2016 campaign will make excellent viewing for political junkies like myself, but it certainly won’t leave the ultimate victor in a strong position to succeed in the general election. When the bruised victor spends the final months of the campaign explaining how far he or she has traveled from the beliefs of the ‘swing voters’ who decide elections in America, the Republican party might find itself regretting its deep commitment to unlimited fundraising.