Imagine receiving this message on your voicemail: “Mr. Gonzalez, we regret to inform you that your heart surgery has been canceled. The medical professionals scheduled to perform it, Doctors Sarna and Latif, have discovered that they have serious disagreements about Middle East politics. Consequently, they are refusing to work together. We will do our best to find you other doctors before your condition becomes fatal.”

Seem far-fetched? In my mind, it is the logical outcome of the manner in which many Jewish and Muslim groups have chosen to engage each other in recent years. Or, rather, not engage.

From college campuses to national advocacy organizations, many Muslim and Jewish groups have made it not just a practice but also a matter of honor to boycott each other because of different views on Israel. They refuse to meet or even join associations that the other group is in, and regularly badmouth their Abrahamic siblings to civic leaders, college presidents and elected officials.

But if it begins with Muslims and Jews refusing to work on a volunteer project on a college campus, where does it end?

Do Muslims and Jews refuse to do research in labs together, or play on the same athletic teams, or partner on school fundraisers, or engage in business deals? Do they even, as in the example above, refuse to perform lifesaving surgeries with one another?

Refusing to work with another group because of its identity is treason against the American idea.

And it’s not as if the Middle East is the only contested territory on the planet. What if other diaspora groups in America — Indians and Pakistanis, Sinhalese Buddhists and Tamil Hindus, Turks and Greeks, Bosnians and Serbians — caught the bug that is infecting American Muslims and Jews and decided to boycott the other in professional and civic life? In my view, refusing to work with another group because of its identity is treason against the American idea. As Martin Luther King Jr. said, “The American dream (is) the dream of men of all races, creeds, national backgrounds, living together as brothers.”

In recent weeks, the shifting ground of American politics has created some promising new possibilities. A group of prominent Muslims and Jews just launched a high-profile council against Islamophobia and anti-Semitism. The New York Times recently profiled a meeting of a group called the Sisterhood of Salaam Shalom that gathered nearly 500 participants.

Personally, I’m most inspired by the shift that I’ve seen among campus-based groups. I have just returned from the Hillel International conference, where President Eric Fingerhut stated unequivocally that Hillels around the country would stand up against Islamophobia.

He received a rousing round of applause. This past summer at an Interfaith Leadership Institute organized by my organization, Interfaith Youth Core, I met Muslim students who took a particular interest in the partnership that King forged with rabbis during his 1966 Fair Housing March in Chicago. They followed Muslim scholars who viewed even a hint of anti-Semitism as poison with no place in Islam, or anywhere else for that matter.

When you work with one another, you put your common Muslim and Jewish ethics into action.

Of course, some brave interfaith leaders have been building Muslim-Jewish partnerships for many years, long before it was fashionable. The names “Sarna” and “Latif” actually refer to a real-life rabbi and imam team at New York University who, when tensions around the Middle East get high on campus, take their Jewish and Muslim students on interfaith service trips to areas ravaged by natural disasters in the United States.

Their message is clear: When you work with one another, you put your common Muslim and Jewish ethics into action in a way that improves real lives. When you don’t, you weaken America.

We live at a time in which Qurans are being defaced by swastikas in public libraries and high-ranking members of the incoming administration have made Islamophobic and anti-Semitic statements. Frankly, it’s an easy time to build Muslim-Jewish partnerships. We owe it to America to build bridges strong enough to withstand whatever bombs may come.

Eboo Patel is founder and president of Interfaith Youth Core and author of the new book “Interfaith Leadership: A Primer.” He is also a member of the Inclusive America Project Distinguished Project, a project of the Aspen Institute Justice and Society Program.

This piece originally appeared at the Religion News Service. 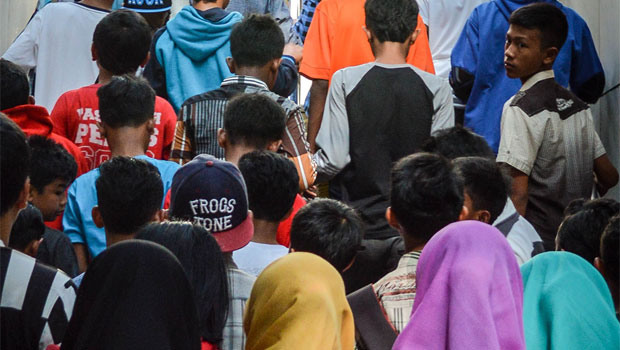 Identity and Equity
Unlocking Abundance: What It Means To Be an Ally