A new report released today, “Sport for All, Play for Life: A Playbook to Get Every Kid in the Game,” offers an ambitious plan to reimagine organized youth sports, prioritizing health and inclusion, while recognizing the benefits of unstructured play. Below, Aspen Institute Sports & Society Program Director Tom Farrey explains the importance of play in children’s health and well-being.

Last August, the most-discussed baseball player in the world was a child, Mo’ne Davis, who had just turned 13. She was the star pitcher of the Taney Dragons, and she and her team drew record television ratings for the Little League World Series. The public was fascinated with Davis’ against-all-odds story: an African American girl from southwest Philadelphia, overwhelming the best hitters in her age group. 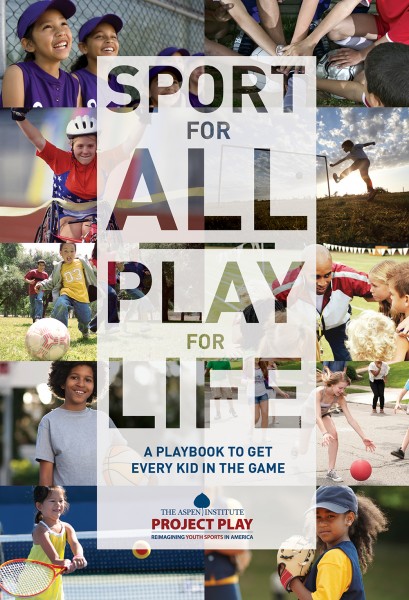 From the mound, Davis did more than remind us that girls can compete with boys — she drew attention to the barriers that kids from lower-income communities must overcome to play. She reminded us that healthy kids are active kids and that, as a nation, we must find a way to extend the benefits of playing sports to all, including the millions of children who grow up with limited access to regular physical activity.

If we are going to ensure that all kids have the chance to grow up fit and strong, we must, among other efforts, eliminate the barriers to sports participation. These include:

Indeed, we ignore, push aside, and fail to develop the human (and athletic) potential of most children. Just four in 10 children ages 6-12 regularly participate in team sports, organized or casual. And that number is declining, which might surprise some, given the rise of travel teams at ever-earlier ages and the growth of youth sports as an industry. Too often, we fail to consider: How many children are we leaving behind because the ask is too high of kids, families, communities?

These barriers affect not just the kids who are missing out, but all of us. Nearly one in three children and teens today is overweight or obese, despite signs of progress in some cities and states. Lack of physical activity contributes to the epidemic, and inactive children often become inactive adults. The Centers for Disease Control and Prevention cites physical inactivity and obesity as risk factors for cancer, diabetes, heart disease, stroke, joint and bone disease, and depression. By 2030, the combined medical costs associated with treating preventable, obesity-related diseases could increase by up to $66 billion per year in the United States, with a loss in economic productivity of up to $580 billion annually.

Childhood is the ideal time to create habits that establish a healthy weight, and none of the key strategies holds more promise in reducing obesity rates among children aged 6-12 than participation in after-school physical activity programs, according to a 2014 analysis published in the American Journal of Preventive Medicine. That’s especially true with black and Hispanic youth. We must find new ways to help young people enjoy being active every day — no matter where they live or how much money their families make. It’s critical that all kids have the opportunity to find and play sports they love.

The Aspen Institute Sports & Society Program created Project Play in 2013 to find ways to help all children in America become active through sports. At the launch summit, featured speaker David Drummond, a senior executive at Google, said that youth sports today “reminds me of lots of other industry structures, business systems, and ecosystems we see at Google. It looks like one that ought to be disrupted, because it seems there’s a huge unmet need out there.” He said he sees the supply of quality experiences not meeting the demand of children or the needs of society, and encouraged us to be “audacious” in pursuing solutions. Since that day, Project Play has convened more than 250 leaders in 10 roundtables and other events, including a televised town hall with President Clinton. From these dialogues, we have identified a set of breakthrough strategies.

The report we release today, “Sport for All, Play for Life: A Playbook to Get Every Kid in the Game,” is the product of our work. It offers an ambitious plan to reimagine organized youth sports, prioritizing health and inclusion, while recognizing the benefits of unstructured play. A unifying document, it collects in one place the most promising opportunities for stakeholders — from sport leaders to mayors, parents to policymakers — to work together to create universal access to early, positive experiences. It’s a playbook to help get and keep all children in the game by age 12 — whatever the game, whatever the form.

While aspirational, it is not a naïve document. It recognizes the pathway to getting kids off the couch, without running them into the ground, will be rocky at times. Take the testy hearing last Friday at the New York City Council, where a bill is under consideration that would mandate the presence of a doctor at all youth tackle football games. A major city would be using its municipal “power of the permit” to set standards in youth sports, a big opportunity thought leaders have explored in our Project Play meetings. In New York, doctors argued that children deserved such protections; the national president of Pop Warner spoke against the bill, predicting it would prompt the demise of community leagues because kids from low-income families might not be able to afford any extra fees. Debates on issues like these are fine and inevitable; what the Project Play report calls for is a commitment to developing solutions that, above all, serve children and communities.

The playbook calls for systems change, starting with the groups that most directly control the policies, practices, and partnerships in youth sports. But it can be used by community change-makers from many realms to break down barriers. It builds on the work of the Robert Wood Johnson Foundation with its focus on the health of children and communities. It draws inspiration from “Designed to Move,” a global plan to address the physical inactivity rates that was developed by the American College of Sports Medicine, the International Council of Sport Science and Physical Education, and Nike, and is endorsed by more than 70 other organizations. The playbook addresses the culture and structure of US sports, while being mindful of the words of US Olympic Committee member Anita DeFrantz, who declared at one of our events: “Sport is a birthright.”

We hope this eight-point, cross-sector plan helps deliver on that obligation to our children.

Please explore our 50-page report, and share your ideas and success stories, at: YouthReport.ProjectPlay.us. Then, on Feb. 25, join the dialogue around how to grow access to quality youth sports when we host the 2015 Project Play Summit at the Newseum in Washington, DC. The 300-person event has already reached capacity, so we plan to live-stream the plenary sessions and you can participate in the conversation via social media. If interested in receiving updates on the live stream, or to be placed on the waiting list for in-person registration, please sign up on our event page: http://aspenprojectplay.org/events/2015-project-play-summit.

Tom Farrey is executive director of the Sports & Society Program, an award-winning journalist, and author of the book, “Game On: The All-American Race to Make Champions of Our Children.” He can be reached by email at tom.farrey@aspeninst.org. Follow him on Twitter @tomfarrey and receive program updates @AspenInstSports.