The Department of Labor (DOL), in response to President Trump’s executive order from August, is proposing a regulatory change that would make it easier for employers to band together to offer retirement benefits for their employees. The hope is that this will mean more workplace retirement options for workers, particularly those who have historically been left without coverage, like those who work for small firms or are in alternative work arrangements.

The proposed rule, which is open for public comment until December 24, would expand the universe of similarly-situated employers that can claim the “commonality of interest” required to offer a multiple employer plan, or MEP. It would also allow professional employer organizations, or PEOs, to sponsor MEPs on behalf of their client-employers and would make certain independent workers eligible to participate in MEPs.

Importantly, these newly empowered associations and PEOs would be able to take on much of the legal liability and plan administration functions that traditionally attach to the employer, lowering the cost and burden of offering a plan. However, in a move that could seriously limit the rule’s reach, the proposal explicitly disallows financial services firms like banks, insurers, and recordkeepers from serving as the group or association that sponsors the MEP.

When ERISA was signed by President Ford on Labor Day, 1974, the purpose of the law was clear: protect workers against the potential abuse and mismanagement of employer-sponsored pension plans. Over the next 44 years, the statute has been amended dozens of times, but the focus on employer plans remains. Indeed, ERISA’s entire regulatory framework is built around the assumption that the employer will be the benefit provider. But what if employers are no longer the best vector through which to deliver retirement benefits?

It’s a question impossible to ignore given the rise of contingent work and the growing benefit-fatigue among employers, especially those wary of the legal liability that comes with retirement plan sponsorship.

Reading DOL’s latest reinterpretation of the law, it’s clear the agency contemplated a more wholesale departure from ERISA’s original purpose, which would have allowed a wider variety of non-employer institutions to relieve employers of their fiduciary duties and offer retirement plans on their own (what some have called an “open” MEP). And indeed, many retirement industry leaders had been hoping for just such an expansion (and no doubt will be submitting comments urging DOL to reconsider its approach in the final rule). But the rule’s authors were constrained by the statute and, presumably, by the legitimate concern that allowing non-employers to act as plan sponsors, plan fiduciaries, and plan service providers all at once would create conflicts of interest and opportunities for abuse that ERISA was not built to combat.

Of course, statutes can change, and entirely new regulatory structures can be created, but only by an act of Congress. Improbably, there is reason to think Congress may well intervene in this area. Multiple bills revising ERISA and establishing new types of MEP-like structures have been introduced. The most prominent is the bipartisan Retirement Enhancement and Savings Act of 2018 (S.2526 & H.R.5282), which would go further than the DOL’s proposed rule by eliminating the “commonality of interest” requirement entirely and instead allowing any employer to use a “pooled plan provider” to deliver a “pooled employer plan.”

The bill does not jettison the employer’s central role in ERISA, and it is not entirely clear if organizations with limited connections to employers – like, say, financial services firms – would be able to serve as “pooled plan providers” under this new structure; much is left to the regulation-writers at the DOL. But such a reform would open the door more widely to a new market for MEPs than the DOL’s currently pending “association retirement plan” (ARP) proposal does. (The bill also resolves tax-qualification issues facing open MEPs, something that DOL does not have jurisdiction over.) The Senate Finance Committee unanimously passed an earlier version of S.2526 in 2016, and the House included similar MEP language in the Family Savings Act of 2018 (H.R.6757), which passed the House in September. There’s an outside chance the provisions will be included in the final “must-pass” bills being debated by Congress this week, though given the current time crunch, next Congress is more likely.

While the political appetite for these types of plans seems high, is there actual market demand for this new approach? And will open MEPs really reach those most in need?

Only time will tell, but there are reasons for both optimism and pessimism.

On the positive side, the UK and Australia have been experimenting for many years with open-MEP-like structures called master trusts, and to good effect. And a research project that Aspen FSP has spearheaded, in partnership with the Toronto-based mission-driven firm Common Wealth, has found that the US is particularly well-positioned to expand its market of association-based portable retirement benefits. That joint research will be published next month, but a few reasons why we’re sanguine about these plans include:

If we’re right about the market opportunity, the ARP rule and open MEP legislation could provide just the regulatory impetus needed to spur action, which is why the Aspen Institute  Financial Security Program’s Executive Director Ida Rademacher was encouraged by the August executive order and why we are closely following DOL’s actions in this area.

Yet there is also reason to be skeptical about the reach of MEPs. It’s argued that MEPs can help close the coverage gap for two main groups: employees of small firms and independent, or contingent, workers. But small employers have had lots of low-cost retirement plan options for many years (e.g., SEP and SIMPLE IRAs), and none have caught on. It’s unclear why MEPs would change small-business owners’ calculation that retirement plans take too much time and effort to set up and are not a top-priority for their workforce.

And for independent workers, the power of inertia is working against progress. We know that would-be savers need strong nudges in order to participate in retirement plans. Automatic enrollment has been very successful in this regard, but the “worker-owners” referenced in DOL’s rule would have no employer to automatically enroll them into the MEP – which could be an insurmountable barrier for many.

Even under the most optimistic projections, open MEPs are unlikely to revolutionize the US retirement system and provide workplace coverage to the 55 million Americans who currently lack it. Providing universal coverage will require bolder public action than is currently being undertaken at the federal level – perhaps via a new regulatory structure for non-employer plans, a government fund to seed innovative, non-employer-sponsored pilots, or a national auto-IRA program. And it will also require larger-scale private innovation than is currently being offered in the market – led, perhaps, by not just associations of employers, but by new types of associations of workers, consumers, and parishioners, voluntarily banding together to ensure their mutual financial security. Aspen FSP will have more to say on this latter idea soon, but, in the meantime, we will continue to press both public and private sector leaders to think creatively about truly revolutionizing retirement in the US. 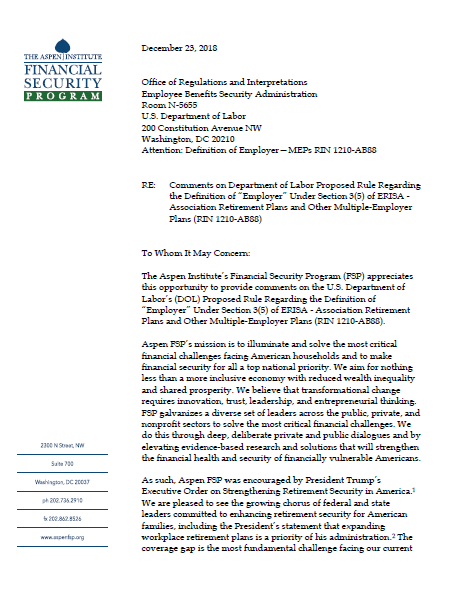