Recent census data has indicated that 3.5 million Americans lifted themselves out of poverty in 2015. But what is behind this shift, and how can we keep these trends moving forward? Ida Rademacher, executive director of the Aspen Institute Financial Security Program, and Maureen Conway, executive director of the Economic Opportunities Program and vice president for policy programs, weigh in on what this report really means.

What do you think was the main driver of this change, and what must be done to ensure it continues?

Maureen Conway: First, poverty is complex, and pathways out of poverty are generally not facilitated by one thing. In this report, there are several drivers of change, including public policies and business practices. In business, we have seen major corporations announce publicly that they are raising their wages.

Investing in the workforce will be an important part of their success.

This is a recognition that investing in the workforce will be an important part of their success. And while wages get the headlines, it’s not just wages. Corporations, including the Gap and Walmart, have been exploring how to provide more regular hours and predictable schedules to their workers, which of course also means more regular and predictable incomes. Aetna, for example, included a change to its health benefits plan that not only reduces expenses for its lowest-paid workers but also encourages health, which can yield long term financial benefits for both worker and the company. So businesses are making a variety of changes.

On the public policy side, there is a somewhat analogous story. Wages have stolen the headlines, with both New York and California now on a path to a $15 per hour minimum wage. But other public policies have been important to facilitating a path out of poverty as well. The Earned Income Tax Credit is widely recognized as helping some poverty-wage workers raise their earnings above the poverty level. In addition, states and local areas have been addressing issues such as paid leave and fair scheduling practices which can help working people maintain their income and employment. Both public policies and business practices have worked together to improve the rewards of work and make it less likely that working people remain poor. We need to continue to raise our expectations about the rewards of work and not be willing to accept that some unnamed global forces “require” poverty-wage work.

Though wages are rising and job opportunities are growing, financial security is far from guaranteed for workers climbing out of poverty. How can low-income workers safeguard themselves against setbacks?

Ida Rademacher: The short answer to how low-income workers can achieve financial security is by building the assets that can buffer families against inevitable financial shocks. But that’s easier said than done. The good news announced last month is a huge step forward. Especially heartening is that the income gains are being felt most strongly at the bottom of the wage spectrum, which is a major reversal from recent trends.

Income and wages are not the full picture.

However, income and wages are not the full picture. Many Americans – especially African-Americans who had much of their assets in home equity – are still trying to rebuild the wealth that was destroyed during the Great Recession. And unfortunately many low-income families still lack access to the employer benefits, government supports, and financial products to turn these new income gains into long-lasting wealth. Half of the workforce does not get retirement benefits at work. The vast majority of the $600 billion the federal government spends each year through tax expenditures to build wealth (via subsidies to homeowners, stock investors, and retirement account holders) goes to top earners, thus exacerbating the wealth gap between the haves and the have-nots. And millions of Americans rely on exorbitantly priced alternative financial products – like payday and auto title loans – to meet their credit needs. To bridge this growing divide between income from work and the ability to build wealth, we will need concerted action on behalf of working families who want to build assets and achieve financial security but are currently excluded from the country’s wealth-building system.

Is the growth in wages more attributable to increased minimum wages in many states or an improving national economy? What other policies help connect work and wealth for Americans?

MC: Both the increase in minimum wages and the improving economy contribute to and reinforce each other in creating a trend toward higher wages. Both corporate and public policy have an effect on raising the floor on compensation in the entry-level segment of the labor market. The effect of the Affordable Care Act, in terms of making healthcare more accessible and affordable, has also contributed to improving financial fortunes and reconnecting work and wealth. Medical debt has been a leading cause of bankruptcy for American families. Another critical area to consider, if we want to encourage work and wealth generation within American families, is childcare. A recent report from the New America Foundation noted that childcare is more expensive than college tuition. An inability to find quality, affordable childcare keeps too many parents working less than they would choose and struggling to get by. At the same time, this tremendous expense typically comes relatively early in a working person’s career, before they have had the opportunity to save. If we want parents to work and have the opportunity to save and invest in their children, then we need to aggressively address this challenge of childcare. This is an area where public policy could create dramatic improvement in the financial wellbeing of working parents and families.

IR: The main way many of us build wealth at work is through contributions to an employer-sponsored retirement account. This makes sense: We’re less likely to spend – and more likely to realize the magic of compound interest – when retirement contributions are automatically deducted from our paycheck, and we don’t have to think about it. Unfortunately, many workers – especially those who make below-average wages and work for small businesses – don’t have access to this savings tool. Government policy can play a constructive role here. For example, a number of states are experimenting with “auto-IRA” programs that would automatically enroll these uncovered workers into a pooled, individual retirement account (IRA). Eventually, we could envision a national program that helps all working Americans save for retirement in this way.

What is the national economic impact of millions of Americans breaching the poverty line?

MC: It is certainly great to see the number and proportion of Americans living in poverty declining. Reduced poverty means improved lives, and more children growing up in more stable and better-resourced homes, and that has a variety of current and future benefits. But we also need to recognize that just moving people above the poverty line is a job that is only half done.

Unfortunately in most of the US, breaching the poverty line doesn’t mean you’ve achieved economic self-sufficiency or stability.

There is a significant gap between the poverty line – which is established nationally and does not reflect the amount of money that is needed to cover basic living expenses – and a living wage income, such as the one published by scholars at MIT, which calculates the amount of money needed to cover a basic budget without relying on any means-tested benefits in different areas across the country. Unfortunately in most of the US, breaching the poverty line doesn’t mean you’ve achieved economic self-sufficiency or stability.

The Financial Security Program and the Economic Opportunities Program will jointly present the 2016 Economic Security Summit on Work and Wealth in Aspen, Colorado, next week. Sign up to watch the opening discussion live. 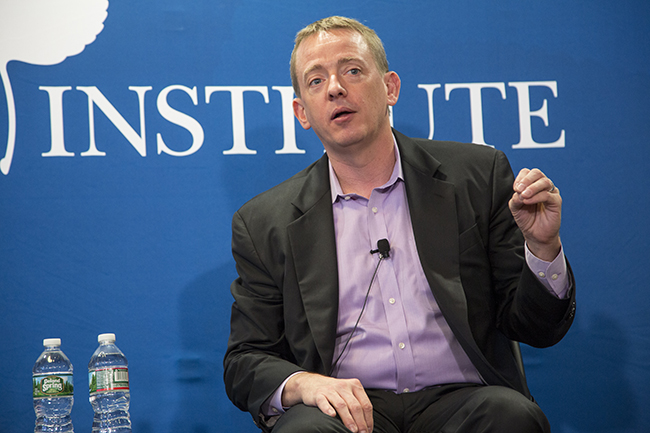 US Economy
Raise the Minimum: New Strategies for Raising Wages and Labor Standards