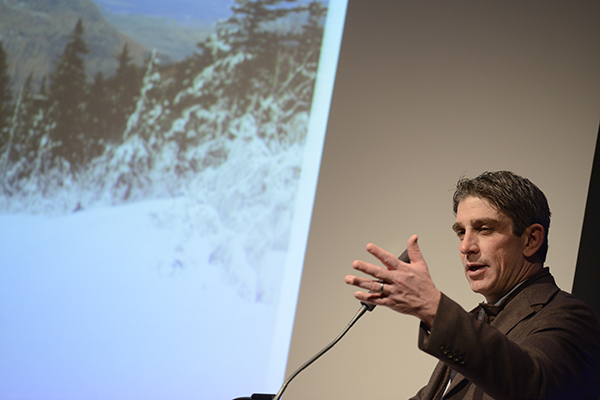 On the same night as President Obama’s State of the Union address, his inaugural poet Richard Blanco spoke to an Aspen, Colorado, audience as part of the Aspen Writers’ Foundation’s Winter Words series. Those who attended may have missed the beginning of the president’s speech, but they were rewarded with Blanco’s intensely personal, yet relatable, story of the quintessential American journey.

Blanco, whose inaugural poem “One Today” emphasizes unity, diversity, and hard work, was born in Madrid, Spain, to Cuban exiles and raised in Miami, Florida. Questions of identity and belonging plagued him from an early age, he said, and would become the themes of much of his work.

Growing up in an all-Cuban exile community, Blanco said he felt like he was living between two imaginary worlds: the homeland paradise that everyone wanted to return to someday but nobody could visit, and the America that Blanco saw on television through shows like “The Brady Bunch.” Blanco illustrated Miami as a “cultural purgatory” between the two worlds (and his childhood wish to distance himself from his cultural heritage) in his poem “The Name I Wanted.” In it he identifies with famous Anglos named Richard (such as Richard Burton, Richard Gere, and Richard Nixon) while deriding the Latino nicknames he (then called Ricardo) grew up with. 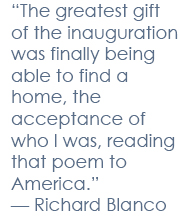 The next poem he read, “Betting on America,” painted a hilarious picture of the Blanco family — Cuban to the core — betting on who would win the Miss America pageant. The sure winner, said Tío Pedro, was Miss Alabama, because “she looks Cubana.” But when Miss Ohio was declared the new Miss America, no one had bet on her, and nobody “could answer Mamá when she asked: ¿Dónde está Ohio?”

Blanco honored his mother in the poem “Mother Country,” which describes the emotional journey of leaving everyone and everything that was familiar to her and building a new life in a strange place. Mamá, who was a cashier in a grocery store, figures prominently in Blanco’s books and poems, he said, and “her story is the quintessential American dream.”

“My mother is more American than I can ever be,” he said. “She has more faith in this country than I could ever have.”

Blanco, who is also a civil engineer and openly gay, touched on his father’s dreams for his son in “Papa’s Bridge” and his homophobic, xenophobic grandmother in “Queer Theory According to My Grandmother.” He spoke of visiting Cuba as an adult and delighting his countrymen with the poem “Havanisis” — a wordplay on Genesis and written in the style of the first book of the Bible. He described a wistful return to a childhood vacation spot in west Florida in “Looking for the Gulf Motel.” And he talked about his partner Mark, through whom he discovered that “love is the real home,” he said.

On the surface, Blanco’s story is that of a Cuban-American boy trying to figure out where he belongs: geographically, culturally, and sexually. But as he intimately and expertly related through his poetry, his emotional experiences are universal. “Who among us hasn’t asked ourselves, ‘Who am I? Where do I belong?’” he asked. “It’s the primordial sense in the DNA of our humanity to find that place.”

Blanco summarized the universality of the American experience in the final poem he read, “One Today.” The inaugural poem sweeps across the American landscape, touches on the lives of laborers and American industries, and refers to Martin Luther King and Sandy Hook — all within the context of one day, one earth, and one sky shared by all. The poem concludes with a message of hope and unity:

For Blanco, “the greatest gift of the inauguration was finally being able to find a home,” he said. “The idea that I was home all along, and the idea that all of our stories are the American story.”