The 100-degree heat in the Nevada desert limits outside play for the energetic three-, four-, and five-year-olds. No matter. It’s cool inside the Acelero Learning Henderson Child Care Center near Las Vegas, and the preschoolers are eager to read.

One student, Emily, turns the pages of an oversized book about farm life while her “reading buddy,” another student named Francisco, explains that baby chickens are called chicks and that horses wear metal shoes. Other preschoolers sit together “reading” books about crayons, spider legs, and billy goats. 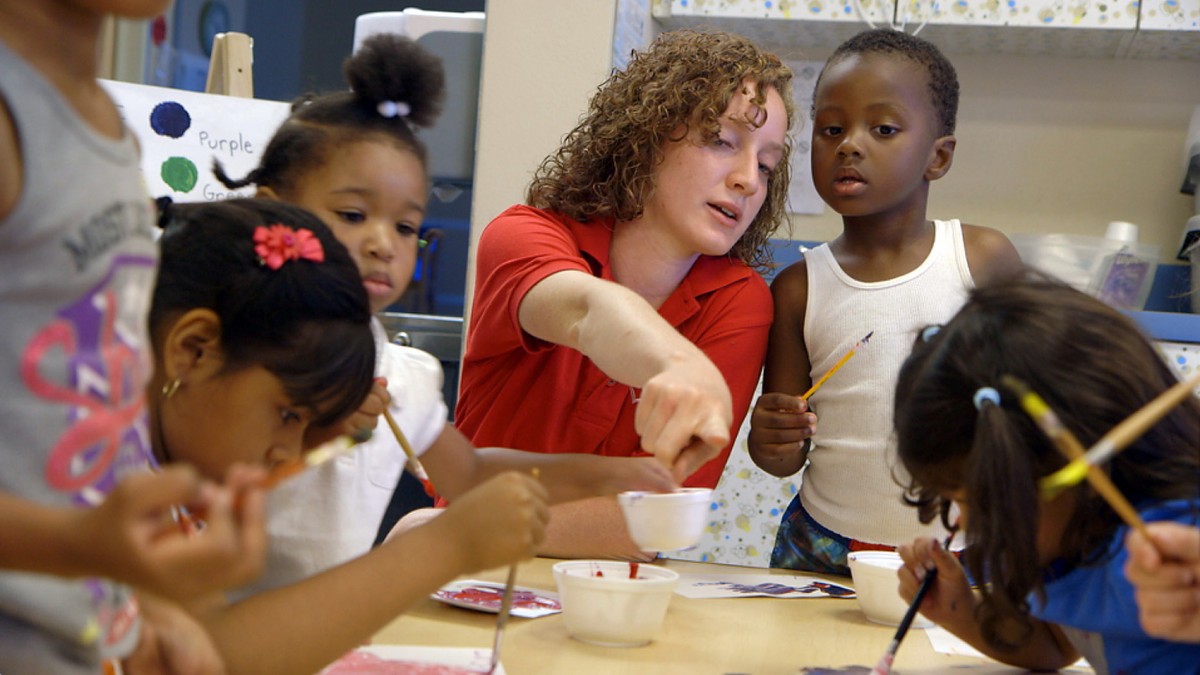 Students and a teacher at an Acelero Learning Head Start preschool.

The daily routine may look relaxed, but there’s nothing casual about an Acelero Learning Head Start program. Every element of the program is intended to help close the achievement gap for low-income kids. Preliteracy exercises like the reading buddies get children ready to read even before kindergarten. And upon enrollment, parents sign a contract promising to read to their children at least 20 minutes each night, engage them in dialogue, and establish consistent family routines.

Acelero Learning’s teachers and staff track more than 30 indicators three times a year, assessing reading and math readiness; attendance; the effectiveness of coaching for teachers, parents, and family advocates; families’ areas of strength and where they need support; and the unaddressed medical needs of students. Every aspect of the program is measured, tracked, and analyzed in Shine Insight, Acelero Learning’s proprietary electronic management system.

“We use the data in everything we do, every day, every hour, to make better decisions for children and families,” says Rory Sipp, executive director of Acelero Learning’s 11 Clark County Head Start centers, including the one in Henderson.

The achievement gap yawns particularly wide in Nevada, which ranks near the bottom of the 50 states in education outcomes. The high school graduation rate is under 63 percent, ranking 48th; and per-pupil spending ranks 49th. Nevada comes in dead last for enrollment in preschool for three- and four-year-olds. As Sipp says, “Our gains are higher because the students are starting out lower.”

Outside evaluations suggest that Acelero Learning is indeed effective in delivering improvements in student achievement. On a number of standardized tests, children’s year-to-year gains in Acelero Learning’s programs are more than 50 percent higher than the average for children in Head Start programs overall, according to a study by the National Institute for Early Education Research (NIEER) at Rutgers University. On the standardized Peabody Picture Vocabulary Test, for example, kids in Acelero Learning programs for 20 months gained 16.1 points versus 6.4 points for kids in Head Start programs as a whole.

Acelero Learning also stands out from the Head Start industry because it is the rare, for-profit, national operator in an industry dominated by local nonprofits. Therefore, Acelero Learning is a test case for the proposition that private investors can play a positive role in improving education outcomes for disadvantaged kids — and perhaps make some money as well.

Although there is widespread, bipartisan support for effective preschooling of American children, Acelero Learning’s model has not always satisfied investors’ expectations. “We are social-returns billionaires over here,” says Aaron Lieberman, Acelero Learning’s co-founder and chief executive. “But the financial returns have taken a lot longer to grow to significant scale. We always just assumed if we make a huge impact on children’s learning, financial success would follow. While that is happening now, it has taken far longer than we thought it would.”

Acelero Learning, headquartered in Harlem, had some of the marks of a hot startup. The company raised a total of $4 million in private capital on the premise that Acelero Learning’s state-of-the-art approach would indeed have a positive, disruptive impact on Head Start.

The notion was that Acelero Learning would reap first-mover advantages with its proven, evidence-based approach to land Head Start contracts across the country. Acelero Learning’s scalable, replicable service model could provide the cash flow that would attract private capital to transform the landscape of early childhood education.

Beginning with a single program in Monmouth/Middlesex County, New Jersey, in 2005, Acelero Learning this year will serve more than 5,000 children in New Jersey and around Philadelphia, Las Vegas, and Milwaukee. Acelero Learning’s annual revenues have grown to nearly $50 million and the company has turned the corner to profitability.

Acelero Learning has shown that evidence-based curriculum and effective management systems can produce dramatic educational gains at competitive costs and with increased enrollment, higher teacher salaries and additional hours of programming for children and families. As Head Start has moved to find new organizations to take on low-performing local contracts, Acelero Learning has often been one of the few new bidders able to quickly take over and turn around troubled programs.

Venture-capital-driven startups that are able to enter new markets quickly, replicate results, grow revenues, and even generate profits usually can expect to get acquired by a bigger company or tap the capital markets with an initial public offering. Those kinds of liquidity events provide exits for investors to recoup their capital and can sometimes mean a payday for founders and employees as well. But nearly 10 years after it received its first outside investment, Acelero Learning has just begun to return capital to its private investors, posing a challenge to the traditional venture-capital model.

In response, Acelero Learning is trying to model a different kind of “impact investment,” as a mission-driven enterprise with stable, if slow, revenue growth. With a recent recapitalization of its early investors, the company is trying to return capital to its investors without experiencing the kind of dramatic exits typical of venture capitalists.

Acelero Learning’s first outside investor was Boston Community Capital, which provided a loan in 2004. That was rolled the next year into preferred shares in a Series A financing, led by Ironwood Equity Fund, also in Boston. Other investors included New Jersey Community Capital and the New Schools Venture Fund. The investments helped Acelero Learning win the Head Start contract in Las Vegas, effectively doubling its revenues.

Initially, Acelero Learning’s ability to make a profit was limited by federal policies. Regulations allowed for-profit companies such as Acelero Learning to bid for, but not make profits on, Head Start contracts. Another regulation restricted Head Start providers from rolling over surpluses from one year to the next. Instead, such companies could earn profits from wraparound, ancillary services, such as after-hours care, paid for by other federal and state programs.

But these limitations didn’t deter early investors. “I liked to say, ‘If a double-bottom line fund can’t invest in a company in a field where you can’t make a profit, who will?’” says Chris Gabrieli, a partner in Ironwood Equity. “They were attacking a big problem, and the importance of the outcome, and the possibility they could build a business that could pay for itself, was a compelling proposition.”

Although early investments were made in part with the expectation that federal policy would change, they ultimately lost that bet. Legislative changes that would have allowed companies to earn at least modest profits from its savings on the administrative portion of Head Start contracts stalled in a congressional conference committee. Nevertheless, that outcome may have been a blessing in disguise: It helped insulate Acelero Learning from criticism that some for-profit education companies sacrifice student outcomes for the bottom line.

In 2009, the Kellogg Foundation invested $500,000 as part of a $1 million Series B round of investment. It was the first investment from the foundation’s $100 million mission-driven investment (MDI) initiative. “Here they are, working with $9,000 per kid, getting results associated with other programs at $19,000,” Tony Berkley, then director of the Kellogg Foundation’s initiative, recalls thinking when he reviewed the company.

But the regulatory restrictions meant that Acelero Learning’s growth was going to be slower than expected. So Acelero Learning moved away from its plan to rapidly grow its own Head Start programs. Because Head Start programs are allowed to use their federal dollars to pay outside providers for needed services using normal contracting procedures, Acelero Learning began packaging its proven coaching, curriculum, and assessment tools into a separate unit to provide technology, tools, and technical assistance to other Head Start operators.

Now called Shine Early Learning, the unit helps dozens of partners apply for hundreds of millions of Head Start funds each year. Acelero Learning still tries to add one or more Head Start contracts each year, to test its methods and bolster credibility, but Shine has become the focus of its expansion plans. More than 25,000 kids are in Head Start programs that get direct technical assistance from Acelero through Shine Assist. Another 75,000 or more are in programs that use Shine’s tools and curriculum. Shine Early Learning now makes a greater contribution to Acelero Learning’s profits than its direct Head Start program operations.

“We think we will eventually, significantly and substantially, reach a million kids each year, if not more,” Lieberman says. “Compared with other pre-K efforts that require an ongoing philanthropic subsidy, we are already having a much greater impact at a fraction of the cost. And our approach is now completely self-sustaining.”

Still, Acelero Learning has not yet earned back the $4 million in private investment that the company spent to build its systems and tools. Some of Acelero Learning’s investors became impatient to get their money back as their 10-year funds approached maturity, and their own investors demanded liquidity.

In the spring of 2014, Acelero Learning recapitalized itself with senior debt to repay early investors, with interest, over the next five years. Ironwood extended the loan, rolling in and expanding its earlier stake in return for immediate interest payments. Boston Community Capital sold the shares acquired from its initial investment for  about two times its original investment. Overall, the returns will be in the low double-digits for the early investors.

The Kellogg Foundation agreed to roll its investment forward. Foundation executives reasoned the company was stable and profitable with stable cash flow from five-year government contracts. The foundation participated in the negotiations with other investors to lower the interest rate to try to ensure the company isn’t overburdened by debt.

“They’re meeting the social impact goals even though they’re not quite scaling at the rate that we want,” says John Duong, program and portfolio officer for the Kellogg Foundation’s mission-driven investments.

Paying back early investors from revenues over the next five years will reduce Acelero Learning’s flexibility in making new investments. But the new financing structure appears to let Acelero Learning build its Shine technology and technical assistance business without pressure to sell out to a buyer that may not share its mission focus. In turn, investors gain some liquidity and immediate yield.

Gabrieli acknowledges that a purely commercial investor might not find a “2X” return of capital compelling, even though that’s respectable for a relatively low-risk service business with stable government revenues. “This is a patient capital space,” he says. “If you’re having a massive impact, and you can get paid back and make double-digit returns for something that’s for the good of mankind — that’s a pretty good result.”

This case study is part of the recent publication “The Bottom Line: Investing for Impact on Economic Mobility in the U.S.” which was published by Ascend at the Aspen Institute and the Aspen Institute Program on Philanthropy and Social Innovation. The Georgetown University McDonough School of Business partnered with the Institute on the survey design and analysis.