Let’s talk about the ideas people talk about “at the kitchen table,” suggested Chicago Mayor Rahm Emanuel during a discussion at the 2015 Aspen Ideas Festival. He was speaking about public education.

During his tenure as mayor, Emanuel has prioritized reforms in Chicago’s public education system. High school attendance has been one area of unprecedented improvement – with graduation rates projected to increase 30 points in less than a decade. Emanuel asserted that the success is not due to his role as a reformer, but his insistence on quality.

“My job as mayor is to make sure you have quality [education],” said Emanuel. “Your job as a parent is to pick which of the quality options you want for your child.” 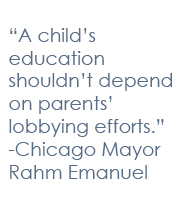 Emanuel discussed this approach to education in conversation with Timothy Knowles, chairman of the University of Chicago Urban Education Institute. Knowles explained that his disbelief in the recent improvements in urban education led him to conduct a validity study on the statistics, and actually found that the numbers tested undershot the improvements in education in Chicago, with attendance increasing, and ACT and other test scores going up.

When asked to address these improvements, Emanuel pointed to the efficiency of city government. “If you make a decision to do something, you can even focus on small things and move the needle dramatically,” he said. Such small things include ensuring that all children have access to full-time kindergarten. “The kids that got half-day kindergarten needed full-time, and the kids that got full-time kindergarten could get away with [a] half day,” he explained.  “A child’s education shouldn’t depend on parents’ lobbying efforts.” This philosophy resulted in cutting the city schools’ central office budget by $15 million. Savings were reallocated. Asa result, every child in Chicago is now provided with full-day kindergarten.

Emanuel took another huge step toward universal education in Chicago by offering free community college to any student graduating high school with a B average. As mentioned by Knowles, the level of educational attainment is crucial to ensure better livelihoods and life expectancies. Emanuel’s program could have long-term positive outcomes that extend into so many other facets of city life.

But Emanuel was also clear that in order to have see the program succeed, more attention must be paid to early education. “I am a firm believer that kids don’t drop out of college freshmen year, they drop out in the third grade,”the mayor said.