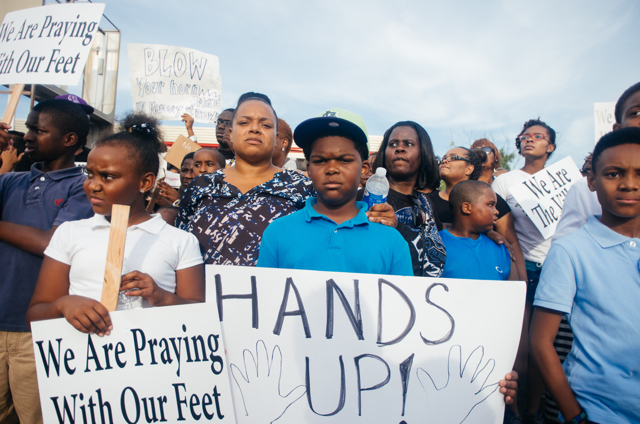 In light of the recent events in Ferguson and Staten Island, Aspen Institute Pahara-Aspen Fellow Neil Phillips shares his thoughts on the topic of race and how shifting the nation’s focus from racism to worth-ism can bring about significant progress. Phillips is the principal of a charter school for elementary and middle school-aged boys in Bradenton, Florida.

The truth is, America is tired of racism; not just the ignorance and hatred behind it, but the concept of racism in general. We’ve been bad at the ‘race thing’ for so long, despite the fact that we’ve had centuries to solve it. The topic of race in America is worn out, uninspiring, and largely unproductive. As a result, we make little to no enlightening progress through the weary racism conversation.

It’s clear that racism needs re-branding. The root cause in the fatal shootings of several African Americans in the past year is a different –ism: worth-ism.

Worth-ism is the timeless villain who reveals that some lives matter more than others. Some lives are worth more than others — more valued and more important. Worth is our oldest and most persistent –ism.

Of course, race played a critical role in each of these deaths. Their skin color attracted unique attention; with a sort of psychological immediacy, their confronters positioned them as harmful. In some cases, conduct elicited engagement and response. Their presence ignited a visceral reaction of skepticism, mistrust, fear, and doubt. Add a loaded firearm, and you have the fatal recipe.

Yes, these tragedies have race as a storyline, but worth is the main theme. The unequal value of each human life is and has long been America’s true humanitarian shackle. It’s our greatest flaw — the handicap that prevents us from truly realizing our great potential as a nation.

Even before America was America, we consummated our affair with worth-ism once it was declared that Christopher Columbus discovered a country that was already populated. Clearly, the inhabitants and their interests didn’t stack up to those of the newly arrived.

Almost 400 years after the ship anchored, our delegates navigated the troublesome conundrum of North/South population, representation, and taxation by creating the Three-Fifths Compromise that counted a slave as 60 percent of a person. Today, female CEOs earn less than their male counterparts, revealing they are somehow less valuable to their companies for performing the same work.

Our public education system is worth-ist. For decades, it has provided sub-standard education to poor children. Yet, somehow, public education has successfully resisted the major overhaul that would surely occur if the same outcomes that plague this demographic suddenly afflicted middle-and-upper-class white students. Inconsistent calculations of human worth and value can be easily found in our legal, criminal justice, and health care systems as well.

At a time when yesterday’s minorities are steadily becoming tomorrow’s majority, we have to advance our thinking about race as an -ism. We have no more use for the construct of racism in its past and current form. We have to shift our attention to the real nemesis of worth-ism.

At Visible Men Academy, our all-boys charter school, our student population is exactly the group that statistics say are most at risk for getting caught in the cycle of detachment from school, unemployment, incarceration, irresponsible parenthood, recidivism, and early mortality. We exist to instill in our beautiful chocolate-skinned boys an indestructible sense of self-worth so that they’ll steer well clear of this force. With this in tact, they’ll be consumed with discovering and pursuing the greatness within them on their paths to becoming brilliant husbands, fathers, and community citizens; too positively occupied and productive to be either targets or victims of worth-ism. Their immense value will radiate like sunrays. We know this about them, as will anyone who has the good fortune to encounter them.

Of course, the string of tragedies has left me with upsetting questions about the meaning of the Stand Your Ground law, the uncompromising finality of the use of deadly force, law enforcement procedures, and interpretations of legal language. While the answers to these questions may lead to necessary corrections, not one of them will carry us to the kind of breakthrough in mindset and elevated human compassion that our nation so desperately needs. They won’t lead us to love, which is always the answer.

That journey is ours to take, even amidst grief, anger, and pain.

Neil Phillips is an Aspen Institute Pahara-Aspen Fellow, member of the Aspen Global Leadership Network, and the founder of Visible Men and Visible Men Academy.