In the aftermath of the most recent Gaza conflict, which ended with a ceasefire in late August, the critically debilitated 140 square mile strip is facing a $1.8 billion effort to rebuild. Adding to the tragic loss of life, nearly a quarter of Gaza’s population is displaced. Hundreds of factories and schools have been leveled, crop harvests and fishing are at a standstill, and the damage to Gaza’s economy will total in the billions of dollars. Against this landscape of unprecedented transition, the prospects for peace are slim and a growing population is wondering, “what’s next?”

Meanwhile, Israel has a deep interest in ensuring the ceasefire is resilient and permanent.  No country seeks out a barrage of rocket fire impeding its economic resilience and national consciousness. For all parties, the objective must be to move toward a lasting resolution to this conflict. To achieve this, new ideas are imperative, roles and responsibilities of all stakeholders must be clarified, and an achievable timeframe and framework for negotiations must be established.

On September 15, the Aspen Institute’s Middle East Programs, in partnership with the Atlantic Council, hosted a discussion with Dr. Salam Fayyad, former prime minister of the Palestinian Authority, and Ambassador Jeffrey Feltman, United Nations Under-Secretary-General for Political Affairs. The discussion focused on approaches for rebuilding Gaza in the midst of a crumbling unity government and the absence of pathways to resume peace talks.  The takeaway was clear: An accountable Palestinian government must promote valuable institutions for sustainable political and physical reconstruction. Israel has its part to play as well: loosening border-crossing restrictions. The UN must also monitor the transparent reconstruction effort in Gaza to ensure the effort isn’t marred by weapons smuggling, which would undermine security and stability. 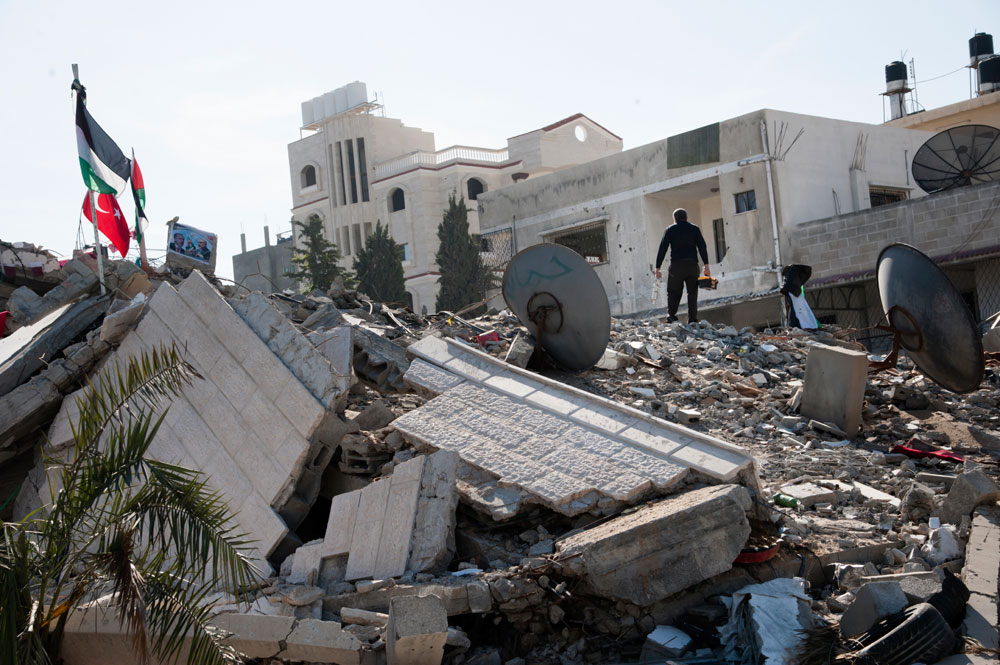 Damage from the last Gaza War.

Tension between Palestinian factions is a considerable threat to an accountable governing body and Gaza’s recovery. Cairo will host reconciliation dialogues in the coming weeks, and some degree of understanding between Palestinian Liberation Organization (PLO) factions and non-PLO groups is essential for sustainable reconstruction. Hamas, the primary governing entity in Gaza, has yet to renounce violence toward Israel or agree to disarm, nor has it accepted the role of the Palestinian Authority in Gaza. This hinders relief and redevelopment efforts immensely. As Dr. Fayyad noted, it is unrealistic to incorporate Hamas into the PLO given the current detente, but it is necessary and also feasible to include them in a negotiation that embraces pluralism but retains the strength of the PLO.

The UN will be much more inclined to involve itself with an accountable, legitimate government

Gaza’s infrastructure, from food and water systems to education and medical care, is in urgent need of repair. Effective governance will be critical to the success of redevelopment. The Palestinian people need to see that basic human services are being restored and that steps toward some economic activity renewed. As Ambassador Feltman noted, if a new government takes form, it must take into account that it will be confronted with the immense task of reconstruction. Ministries must have the capabilities to take on both reconstruction and reconciliation, to speak on behalf of the people, but also act. This new government structure could produce a robust strategy to rebuild infrastructure and the economy and create confidence with the Palestinian people as its sole mandate.  However, an effective institutional structure has been absent in Palestine since 2005.

Rebuilding is a tall order given the scale of the challenge. The UN will be an indispensable partner in this effort especially in liaising between donor states and actors on the ground. According to Feltman, The UN will be much more inclined to involve itself proactively with an accountable, legitimate government. The fact that there are no fewer than nineteen UN agencies poised to help Palestinians take on this challenge underscores just how complex and critical the coordination of relief will be.

In a similar vein, Feltman stressed that the UN must work more with Palestine’s industries as well as its institutions in order to successfully repair Gaza’s economy. These partnerships are crucial to forge trust between the UN, Gaza, and the private sector. Humanitarian assistance is key, but partnerships that create economic opportunities will make a lasting impact for the residents of Gaza.

Dr. Salam Fayyad on the future of the Palestinian people.

Reconstruction cannot happen without robust foreign investments. But, as Fayyad observed, it’s a vicious cycle: Donors need to be assured that the process is efficient, that money will be used appropriately, and that peace will last. Palestinian leaders are not unaware that repeated bouts of war and recrimination followed by costly reconstruction have left the international donor organization community wary. This is another reason why a sturdy reconciliation between factions and a long-term agreement with Israel is so crucial.

A representative government of moderate voices is essential to the rebuilding effort of Gaza. It is not only necessary to draw robust international aid and investments, but also to ensure that the Palestinian people at large reap the benefits of this support. A government that truly represents all of the Palestinian people will send a message that it is serious about moving toward a peaceful solution in the region. If such a government arises from the rubble of this latest war, it would go a long way at dispelling the culture of disbelief that has stifled progress in the larger conflict for so long.