The worst refugee crisis since World War II has quickly become Europe’s most pressing challenge. Three thousand people arrive every day at the borders of the European Union, fleeing mostly from the failed states of Syria and Libya. Inside the EU, based on a process launched by the Schengen Agreement of 1985, there is free movement of people. Until now, the EU has not behaved like an island but more like an archipelago one can access after strenuous effort and then navigate freely inside. 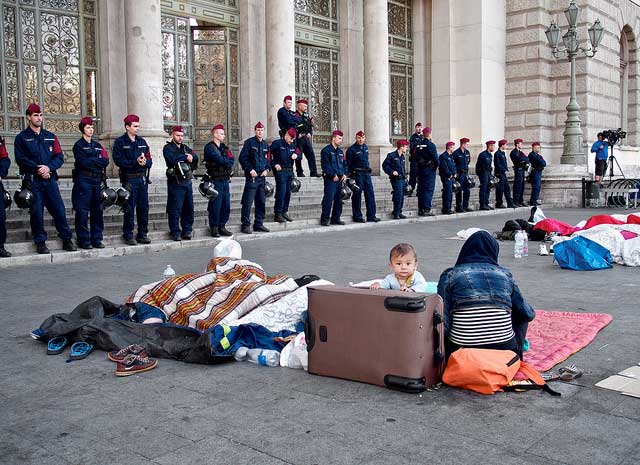 Refugee families camp outside of a train station in Hungary. Photo by Flickr user Michael Gubi used under Creative Commons.

Hence, newcomers once inside the EU aim to relocate to member states that are more generous toward political refugees. In Budapest, Prime Minister Viktor Orban sees the situation as a matter of strict border control, with the help of the army. By contrast, German Chancellor Angela Merkel has risen to the occasion and visited center for refugees that have faced xenophobic attacks in a gesture of official protection to these new arrivals, who also faced unrest and violence in their home communities.

Merkel has also decided that in Germany, the applicable legal point of entry into the EU will not determine the country in which the application for political asylum is processed. At the same time — along with French President François Hollande — Chancellor Merkel has argued the case for distinguishing immigration based on poverty from those fleeing their homes in order to avoid dying violently at gunpoint. She has worked with the European Commission to develop a fair system of distribution of immigrants in all member states.

The chancellor has understood that Germany should set an example, both because of the economic means at its disposal and the general sentiment of the German population in favor of doing more for the refugees. (Germany demonstrated this in the past during the war in the Western Balkans.)

Merkel’s moral leadership connects with the ideas of the eighth century philosopher Maimonides: “I only know what humanity means when I meet a foreigner.” Merkel therefore breaks away from the image she projected during the single currency crisis of a leader obsessed with austerity and the need to balance the books.

The refugee crisis consolidates Merkel’s European leadership, but the Union still faces serious divisions after the euro crisis. Underlying the recent tension is the fact that Europeans have not been able to relaunch economic or political integration in the 21st century as an attractive idea — despite how desperately this act of renewal is needed.

With populist movements on the rise in almost every member state, it is more difficult than ever to put a comprehensive European strategy on immigration in place. If, however, there is no change in EU policy, the very idea of the Schengen agreement will fray and the freedom of movement it represents will fragment. Most importantly, the ethical vision behind European integration — how we treat the Other, avoiding discrimination or forced assimilation — will lose its meaning. If we only take into account Syria and Ukraine, the number of potential newcomers is very high. Given this bitter face of globalization and the wars of our time, sealing borders and limiting movement immediately raises questions about fundamental rights, identity and citizenship.

Beyond Merkel’s call to share responsibilities, EU member states should use and share all their knowledge about integrating newcomers successfully into the fabric of Europe. To rely only on existing welfare systems for this process would feed the frustration (and voter rolls) of anti-European demagogue. We must standardize the rights and obligations of refugees as we bring them into the EU.

Of course, the situation in the countries where these refugees began their voyage must be addressed, as UK Prime Minister David Cameron has reminded us. Germany has no answers to the instability and war in the European neighborhood, and neither do most of the other member states. Until the European Union becomes an effective global actor that can use its clout to head off future crises, our institutions and national governments will have to learn to manage the fallout from many more.