Anne-Marie Slaughter and Charles Kenny speak at the 2013 Winter Socrates in Aspen.

Register now for the Aspen Institute Winter 2014 Socrates program, a forum for emerging leaders (approximately ages 28-45) from various professions to convene and explore contemporary issues through expert-moderated dialogue. The seminars, held this winter from Friday, February 14 to Monday, February 17 on the Aspen Meadows campus, also provide the opportunity for participants to enter into a diverse professional network, and into the broader range of the Institute’s programs.

The roundtable discussions will be moderated by a triad of experts including Family Safety Online Institute founder Stephen Balkam; Esther Dyson, chairman of EDventure Holdings and founder of HICCup.co, the Health Initiative Coordinating Council; and Jeff Rosen, president and CEO of the National Constitution Center, professor of law at The George Washington University, and the legal affairs editor of The New Republic. Don’t miss the opportunity to consider these important subjects in an environment that creates lasting relationships and a network of leaders and peers.

For more on the weekend’s schedule, click here. To join the conversation, register here.

Over the July 4 weekend at the 2013 Socrates Summer Seminar, the group explored the ethics and values for both society and the individual. The New York Times‘ David Leonhardt examined how the generation gap defines American voting patterns. In his seminar, former Xerox Corporation Chief Scientist John Seely Brown explorated “the big shift,” which finds that the search for identity is now marked by adventurous and innovative exploration rather than familiar, more linear ways of working and learning.

Psychologist and Stanford educator Madeline Levine questioned what constitutes a life well-lived. She invited participants to ponder whether the pursuit of happiness will better our society’s quality of life. Dan Glickman, former US secretary of agriculture and director of the Aspen Congressional Program, led a discussion on how modern technologies might ease the tension between population growth in the developing world and the preservation of the planet’s natural resources. George Mason University Professor Jack Goldstone delved into the impact that expanding middle class consumption in newly industrializing economies, combined with economic challenges facing the West, will have on global economic growth.

The weekend of learning and networking culminated in the Socrates Program’s 2013 annual benefit dinner, co-chaired by Socrates alumni Peter Hirshberg,Adib and Kerry Nasle, Marsha Ralls, and Bill Resnick. The event, which honored Institute Trustee, Socrates alumnus, and Henry Crown Fellow Arjun Gupta, featured Google Ideas Founder and Director Jared Cohen in conversation with Institute President and CEO Walter Isaacson. They spoke about the confluence of technology, diplomacy, and geopolitics and the “huge blind spot” the US government faced in the mid-to-late 2000s, when words such as “Google” and “Facebook” were not taken seriously in diplomatic settings.

Cohen advised the next generation — the first to be socialized in a world defined primarily by technology and connectivity — to come to the aid of those who need help making sense of technology. “These future leaders will have a natural advantage over those they will be working for,” said Cohen. “Technology and connectivity will allow us to further our reach, but it does not absolve us of taking responsibility for its manifestation.” 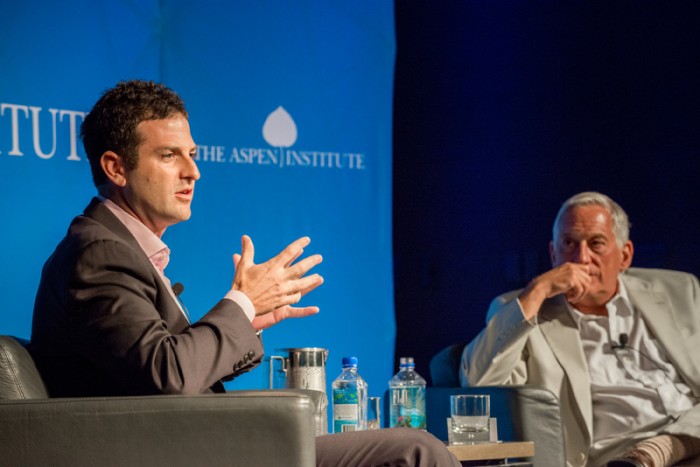