Sen. Ron Johnson (R-WI) wants people to get the facts, get informed, and think about America’s major fiscal challenges. With a detailed analysis of the problems and ideas for workable solutions, Johnson makes his presentation to college students, business groups, and, recently, an Aspen Institute audience, as part of the Hurst Lecture Series in Aspen, CO.

“The root cause of our fiscal situation in this country, and a lot of our cultural problems, is the size, the scope… all the intrusions of the federal government in our lives,” said Johnson.

While only 100 years ago, the federal government accounted for only 2 percent of the American economy, today it’s at 20 percent — and on a trajectory to reach 30 percent in the next several years, said Johnson. That’s at odds with the small government the founding fathers intended, he added.

The problem with the government consuming that much of the economy is that it’s “a horrible allocator of capital,” Johnson said, unlike the private sector, which is not perfect but at least allocates capital efficiently. 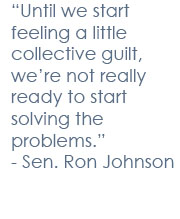 Johnson presented his analysis of America’s fiscal position. This year, the federal government is spending $3.5 trillion (up from $2.3 trillion in 2004), but if President Barack Obama’s budget passes, spending will be on track to reach $5.9 trillion in 2024. And most of that spending is on “auto-pilot,” or can’t be changed from year to year. In the 1960s, two-thirds of federal expenses were discretionary; today it’s just over one-third, and by 2024, discretionary spending will account for less than one-quarter of the federal budget.

The federal debt, now at $17 trillion, equates to more than $55,000 per person. Ten years from now it will be roughly $75,000 per person. Social Security — which Johnson calls a legal Ponzi scheme — has a deficit that’s projected to reach $7.6 trillion by 2043. Despite a war on poverty, the 15 percent poverty rate has held flat since the mid-1960s. And Medicaid, which Johnson called the No. 1 problem, is paying out $3 for every $1 it takes in.

“Do you realize what we’re doing to our kids?” asked Johnson. “Until we start feeling a little collective guilt, we’re not really ready to start solving the problems.”

But the main issue is that few in Washington admit the fiscal situation is a serious problem, Johnson said, likening the approach to a 12-step program in which it’s not possible to move forward with solutions unless one first admits he has a problem. This denial extends from federal staff to members of both parties in Congress to the president himself, said Johnson, whom he has met with and who downplayed the fiscal crisis.

“If the president won’t go to the American public and show them the extent of the problem, I don’t know who I’m supposed to work with here,” said Johnson, who added that he believes most people in government are well-intentioned but just not good with numbers.

Johnson said he’s been accused of trying to impose draconian budget cuts, but all he really wants to do is reduce the rate of growth of spending. And while most people in Washington think in terms of a 10-year budget, it’s essential to think in terms of 30 years to tackle this problem effectively, he said.

With this magnitude of problem, the solution lies in “strong and robust economic growth,” said Johnson, which lies largely in the hands of a free market that should be unfettered of government regulation and a bad tax code.

Johnson advocates pro-growth tax reform that incentivizes companies to not flee overseas and puts the burden of taxes on the owners of corporations rather than employees. He sees solutions in the development of cheap, domestic energy and the elimination of expensive government regulations. And most importantly, there have to be incentives — not disincentives, as are found in many government aid programs, Johnson said — for people to work, go back to work, or aim for higher-paying jobs, because “when people withdraw from the economy, it’s going to be smaller,” said Johnson.

“And we have to do away with demagoguery,” he added. “Until we improve the level and honesty of the political debate, we’re never going to solve these problems.”

Read below for a comment from Aspen Institute Justice and Society Program Executive Director Meryl Chertoff:

One thing to consider is trusting the states more. State government can be more flexible and nimble than the feds when it comes to education, job growth, the economic support net, and population health measures. That is not to say less government — rather it is to suggest that the states, not Congress or the federal agencies, may be better equipped to make decisions on a range of issues. Here are two factors that make the difference: state budgets are constitutionally required to be balanced and accountability to the voters is more direct. Governors and state legislators who don’t get it right soon find themselves out of office.