In a recent article marking the 40th anniversary of the end of the Vietnam War, Gary Silverman writing in the Financial Times wrote: “Nor, for that matter, have Americans shown tremendous interest in the Vietnamese who were exposed to the millions of gallons of Agent Orange…” I enjoyed the article, but I would like to take issue with that claim. While much of the American public is less informed about the issues surrounding dioxin and Agent Orange, our nation has started to address the fallout from the use of those materials.

Beginning in 2000 the Ford Foundation launched work on the Agent Orange legacy in Vietnam through grants to both Vietnamese and American organizations which ultimately totaled $17.1 million. 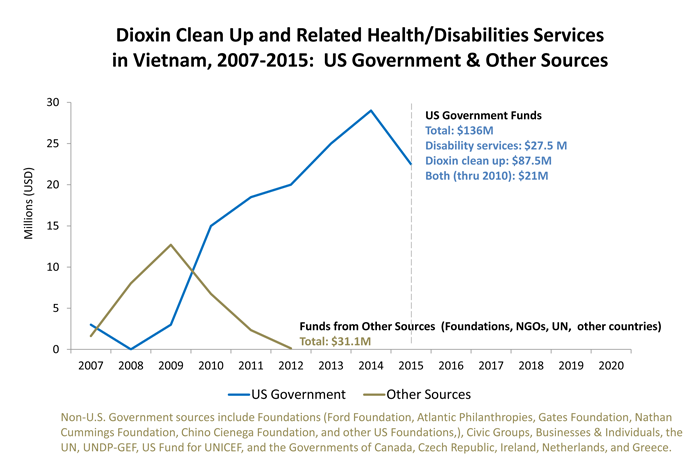 Within this program the Aspen Institute helped set up a bi-national eminent persons’ group, the U.S.-Vietnam Dialogue Group on Agent Orange/ Dioxin. The Group was co-chaired by Aspen President Walter Isaacson and Madame Ton Nu Thi Ninh, a member of Vietnam’s National Assembly, and convened by Ford President Susan V. Berresford. The Group built confidence on both sides and prepared and mobilized support around a Plan of Action that laid out what is needed to bring this legacy to an end.

At the same time, in Vietnam, Ford grantees developed treatments and support services for Agent Orange victims; identified and began to clean up dioxin hotspots; and rebuilt rural livelihoods in areas that had been sprayed. These actions benefited more than 10,000 Vietnamese in eight provinces.

And in the U.S., the Aspen Institute engaged with policy makers in Washington and reached out to the American public who were unaware that dioxin continues to be a significant problem for Vietnam. The American public and lawmakers now agree that “Agent Orange is a humanitarian concern we can do something about.”

Senator Patrick Leahy (D-VT) has led the U.S. government response to the Agent Orange legacy. Since 2007 Congress has appropriated a total of $136 million for Agent Orange in Vietnam. This comprises $105 million for clean-up of dioxin-contaminated soils at the Da Nang and Bien Hoa airports and $31 million for health/disability services in areas that were heavily sprayed during the war.

This Congressional funding, implemented by USAID, has already had a positive impact on U.S. relations with Vietnam. For example, at the ground-breaking in August 2012 for the clean-up of the Da Nang airport a Vietnamese observer noted, “With every decade that passed with no action, our hopes dwindled that anything would ever be done about Agent Orange. Now we see the U.S. government taking action. We think it helps turn us to a new page in our relationship.”

Although the story of Agent Orange is certainly not yet over, this is progress and it’s worth celebrating. The environmental clean-up promotes further progress on what is the heart of the matter: a full response, to the extent possible, to the needs of people with disabilities linked to dioxin exposure, that is, to the Agent Orange victims. A new Congressional initiative moves us further in that direction.