Last week during an interview for Maori TV, the national network for the indigenous people of New Zealand, I was asked why so many Americans are unaware of the events at Standing Rock when worldwide, it has attracted so much attention. While our mainstream media has been largely ignoring it, a range of excellent grassroots and international media have thankfully helped inform the rest of us. One and a half million people who recently checked in to the Standing Rock Reservation on Facebook were clearly getting their information somewhere.

But media coverage is only one way to measure American attention when it comes to the protest against the Dakota Access Pipeline. This new movement for a brighter future in Indian Country lays bare the deep misunderstandings and myths about who we are as Native people by the broader public. This contemporary fight by Native people coming together from around the world with their allies puts front and center a counternarrative, one that defies the American public’s usual points of reference. They are finally seeing the Indian Country we know—hundreds of resilient Native nations fighting for what our ancestors agreed to with the US government: Respect for the treaties that were signed, our lands, our waterways, our sacred sites, and control of our own communities and destiny.

Every action we take is interpreted through a lens of false and reductive stereotypes.

Why is the story behind Standing Rock an exception to the usual narrative about who we are? Every action we take is interpreted through a lens of false and reductive stereotypes, school lessons, movies and popular culture—and that’s only when our actions and our very existence are acknowledged at all.

At the same time that Native people were being attacked by heavily armed police for praying in the Missouri River, non-Native college students transformed their plight into derogatory Halloween costumes for a night out on campus. As if that wasn’t enough, those same protesters had to follow the nonstop coverage of non-Native Cleveland “Indians” fans dressing up during the World Series in what can only be described as “redface.”  This is the standard point of reference for the public.

The reaction to the movement at Standing Rock demonstrates a surprising willingness by the broader American public to see us differently—to look past how they’ve been conditioned since childhood. It presents a unique moment for us to educate our friends, colleagues, and community members. Nearly every day since the protests gained attention, I’ve spent considerable time educating people around me about the basics of sovereignty, tribal traditions, and the work I do every day with Native youth. For those of you wanting to learn more, I highly recommend the 101 Guide to tribal nations by the National Congress of American Indians.

Standing Rock has also helped more people around me understand why Native youth are fighting so hard.

Standing Rock has also helped more people around me understand why Native youth are fighting so hard to retire racist mascots and stereotypes in their schools and communities. I was speaking last week to a symposium in Denver organized by the Northern Colorado Unity Youth Council about the psychological impact of racist team names and mascots on Native youth. The room was full of students, school administrators, educators, and government officials discussing the latest efforts to retire these offensive and derogatory images. Nearly every conversation came back to Standing Rock. It wasn’t just the raw juxtaposition of real Native people praying the river and white college students mocking them through racist Halloween costumes. Instead, we found ourselves strategizing about how to use the “Standing Rock moment.”

Many of us are thinking about how to best use the momentum for Standing Rock. For me, it’s a tremendous opportunity to educate. When people who are outraged about what’s going on want to know more about it, I tell them about my great-grandfather attending boarding school, and how that system led to serious historical trauma for generations in our communities.

It’s not just a cute identity.

I tell them about what sovereignty really means to us as Native peoples, and why it’s not just a cute identity. I tell them why Native youth are rejecting the decades old “traditions” of racist mascots in schools that define their heritage as a one-dimensional logo to be scuffed up on a gym floor.  Standing Rock has done more to help people see us in a personal and human way—to relate to us—than anything I’ve seen in my lifetime. Now, let’s all turn the Standing Rock moment into a transformation of a new public narrative about who we are. 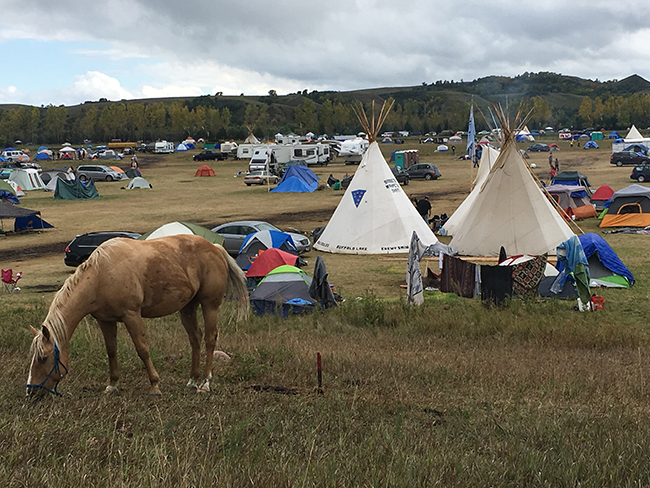 Identity and Equity
The Story Behind Standing Rock