When the children recovering from malaria in Kenya’s Kwale county hospital eat their lunch today, they will have fresh tomatoes and bell peppers. The vegetables will have come from local farms operated by the eight members of the women’s farmers group Tumaini Godzo. Just last month, the women won the county government tender to supply the hospital with fresh vegetables. Today, it is hard to say who is benefitting more — the young hospital patients or the women of Tumaini Godzo.

Just a year ago, the women were subsistence farmers, earning little profit on their rows of maize. Today, the contract gives them access to a secure market and a steady income. They can feed their families, send their children to school and plan for future growth.

The tender was transformational — and the result of concrete actions taken by the women, the county government, and the social venture Oyeska Greens, a local agri-business which trains farming collectives on the Kenyan Coast. Oyeska Greens has helped 40 collectives learn how to farm high-value vegetable crops, keep business records, and use data to advance their farming. 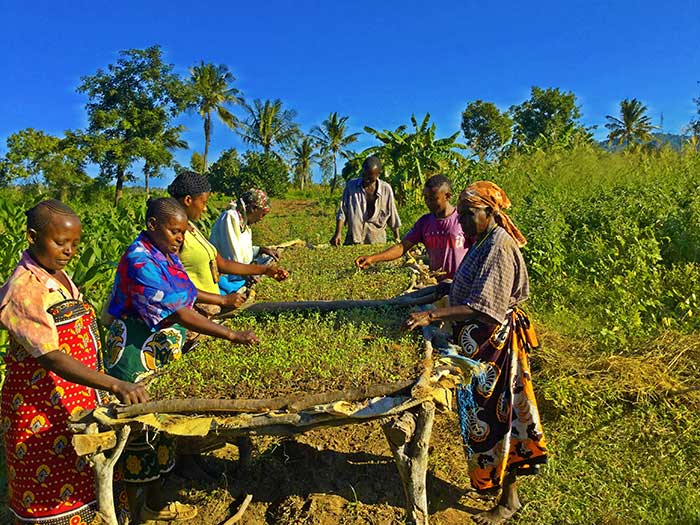 The experience of Tumaini Godzo and Oyeska Greens highlights the crucial role of smallholder organization, training, and supportive policy in transforming Africa’s agricultural sector. This transformation is critical to meet the rising demand for high-value, high-quality food, particularly in Africa’s rapidly growing cities and towns. Currently, this demand is largely met through food imports — costing $40 billion annually — rather than from food grown and marketed in Africa.

But that is changing as Africa’s farmers begin to think like businesses. One way to do that is by forming cooperatives. The majority of smallholder farmers own less than an acre of land, making it difficult to individually meet market demand. With cooperatives, farmers can: pool and reduce risk; get access to better financing; acquire and share farm machinery and other assets; compete with larger entities for contracts; negotiate better prices, and jointly market their produce.

Secondly, farmers must go beyond the initial step of forming local groups to both take charge of their growth and develop larger and more powerful networks. Farmers need to build strong, functional, democratic and transparent organizations that engender trust. By carefully recording their operations, from business transactions to organizational elections, farmers’ organizations can inspire confidence in both new members and potential investors.

Achieving scale is also essential to achieving impact. Take the case of the 200-farmer strong pig farmers association in Uganda. Led by livestock farmer and veterinarian Emma Naluyima, the Commercial Farmer’s Trust has won numerous contracts, including one to supply 600-1000 kilograms of meat a month to a local meat-processing company. As a cooperative, the farmers were able to eliminate middlemen and get a better price for their product. Association members are earning double the previous price for their products. The Commercial Farmer’s Trust is also working on policies to support their budding industry, including lobbying the Government of Uganda for a compensation policy in the event that pig farmers lose their animals to African Swine Fever.

Through increasing productivity, joining forces, and linking to larger markets, smallholder farmers can do more than help feed Africa. They can also help employ Africa, especially its youth. Every year, ten million young people enter the labor market. As African agriculture becomes more profitable and dynamic, it will attract more of these youth, and it will benefit in return from their skills, energy and creativity.

Success comes to farmers who are open-minded and willing to learn from others. One such farmer is Gifty Jemal Hussein, a smallholder in Gunchire, Ethiopia. After years of growing maize, banana and a few coffee plants, she was open to planting an improved variety of corn, using techniques demonstrated by a development program. Three months later, she tripled her corn harvests. Overjoyed, she took a quarter of her first harvest to her four adult children in the capital city.

To share her success, Gifty convinced the local government to lease one hectare of land to her women’s farming collective. She rented a tractor and guided the group in growing the new seed. Within a season, all 20 collective members were investing in a new and thriving farming venture.

But even the most well-organized and open-minded farmers cannot succeed on their own, especially given a decades-long legacy of neglect of African agriculture. Farmers need the support of government policies and investments that facilitate access to land, finance, training, agricultural technologies and markets.

Governments can implement policies that allow smallholder farmers to harness every available opportunity. This includes incentives such as the county hospital tender won by Tumaini Godzo. Such opportunities can inspire innovation across African agriculture. Furthermore, governments should mandate that certain percentages of such programs be awarded to women and youth groups who stand to benefit most. Similarly, the government should publicize available tenders and related opportunities using all channels at their disposal.

Governments can create conducive environments to help farmers to thrive and rural communities to prosper. And by continuing to take charge of their own growth, forming cooperatives and utilizing all available resources, smallholder farmers can succeed, and re-write the history of African agriculture.

Dr. Esther Ngumbi is currently a post-doctoral researcher at the Department of Entomology and Plant Pathology at Auburn University in Alabama. She is a member of the Aspen Food Security Strategy Group and an Aspen Institute New Voices Fellow.