A three-day symposium for the Aspen Institute’s Society of Fellows delved into the many and complex issues facing the Supreme Court of the United States.

Discussions with experts – attorney Theodore Olson and NYU law professor Melissa Murray – ranged from the storied history of the Supreme Court to precedent-setting court cases and the colorful personalities of the justices presiding over them. The symposium characterized the Supreme Court, whose role has evolved over 230 years, as a judicial balance in the constitutionally mandated separation of powers created as an effective bulwark against the threat of tyranny in the United States.

Discussions of landmark cases like Marbury v. Madison, Plessy v. Ferguson, and Roe v. Wade illuminated the advance of the Supreme Court from an underutilized branch of government in its early years to the powerful institution it has become today as it provides a national conscience for the rights and liberties of the American people.

These discussions mirrored the complexity of American governance, moving from the macro view of constitutional law as the sacrosanct foundation of American democracy to the micro interpretations of the law by enumerating details and distinctions of specific court proceedings and resulting decisions. The power of the court was brought into clarity, but also its limits.

“The justices are not kings,” said attorney advocate Ted Olson, who has argued many cases before the Supreme Court and is recognized as an expert on constitutional law.

Just the opposite, affirmed legal scholar Melissa Murray, explaining that at the time the Constitution was drafted, the Framers understood the judiciary to be “the least dangerous branch” because, unlike Congress and the president, it lacked the power of the purse and the power of the sword.  Instead, the Framers were more concerned about the possibility that either Congress or the President might accumulate too much power, as the Parliament and the King had done, allowing these branches to become tyrannical and run roughshod over the rights of the people.  The Framers did not necessarily envision the judiciary as bulwark against the prospect of such tyranny, but over time, the courts, through the exercise of judicial review, has come to play this role, checking the excesses of the political branches and vindicating individual rights. That transformation — from the least dangerous branch to a potent check on the excesses of other branches — is, in Murray’s view, the real story of the Court and its place in American society.

The Framers’ view of the judiciary as the “least dangerous branch” is evident, Murray explained, in the tenures of the first three chief justices: John Jay, John Rutledge and Oliver Ellsworth, all of whom were appointed to undefined and untested roles, from which each stood down after brief terms.  All of this changed under the 34-year-long reign (1801-1834) of Chief Justice John Marshall, who asserted the court’s “province and duty to say what the law is” in the landmark case of Marbury v. Madison (1803).

The justices are not kings

“That case transformed the court,” said Murray, which then began examining and reviewing acts of Congress and assuming the legal authority to define the scope of governmental powers as defined under the Constitution.

Leaping to the present, Murray portrayed today’s court as “the most conservative court since the Gilded Age,” a court where the justices are shockingly homogenous in terms of education, domicile, socio-economic background, employment background, and religion. The Court has been derided as excessively partisan and politicized due to controversial court cases and the media spotlight.

Such visibility contributed to an acrimonious outburst by the most recent court appointee, Brett Kavanaugh, who maligned his televised senatorial hearings as a “circus.”

“It would be my wish,” said Society of Fellows member Andy Rothschild, “that personalities did not play such a role.”

“We are a political government and a political people,” Olson said, “where it’s hard for justices to avoid the fray of partisan politics.”

The court’s role has also grown to meet the expansive scope of what Murray called “the administrative state,” which proliferated under the presidential terms of Franklin D. Roosevelt and the New Deal.

“Government has become incredibly complicated,” explained Olson, “because under FDR and many of his successors, the United States has become governed by boards of experts and independent agencies that were, in fact, extra-constitutional.”

Overruling Roe would be so controversial it would detract from the legitimacy of the court.

Olson and Murray described the court as an ever-evolving interpreter of what the Founders had originally intended in the Constitution and elucidated by the Federalist Papers.

“The court’s interpretations determine the intent of the framers,” Olson said, “but without rigid guidelines. They ask, ‘What is reasonable?’ ‘What was the original context for due process of the law?’ Under freedom of speech, they ask, ‘What is speech?’”

“The judiciary’s evolution has been from a hobbled, weakened institution into an autonomous body that provides checks and limits on the authority of the president and Congress,” Murray explained.

“The government has no power without the permission of the people,” reminded Olson. “This was the reverse of what the Founders recognized in England, so rights were enumerated to guard against the abuses of government, and the separation of powers was to guard against tyranny. The Federalist Papers described Congress as the ‘impetuous vortex’ (Federalist #48 – James Madison).” The Senate is often characterized as the “greatest deliberative body in the world,” but the conduct of Members of Congress does not always line up to that standard.

In addition to its oversight of Congress and the president, the court must weigh the quasi-autonomy of the states. Murray explained that part of the Constitution’s logic was to allow the states to function as “laboratories of democracy,” piloting various public policy initiatives that might, if successful, influence federal legislation.

As importantly, Olson and Murray both agreed that the notion of federalism had itself undergone a transformation in recent years.  A generation ago, the idea of states’ rights had a fixed meaning — one more likely to be associated with conservative (and perhaps regressive) policies.  Today, however, the idea of states’ rights — federalism — is the “darling” of progressives.  From sanctuary cities to state-level policies on climate change, this latest iteration of “Our Federalism” has been used to justify efforts to resist the policy interventions of the Trump Administration.

In answer to a hot button question about Roe v. Wade being overturned by an increasingly conservative court, Murray said: “Overruling Roe would be so controversial it would detract from the legitimacy of the court. But,” she cautioned, “the majority could hollow out Roe v. Wade and make it almost impossible by making abortions more expensive and making it harder for clinics to comply, driving them out of business. This stealth approach would be worse than striking it down.”

Social and cultural mores are ever changing, and there is nothing static about the law, said Murray, who quoted Justice Learned Hand: “Liberty lies in the hearts of men and women, and when it dies there, no constitution or court will save it.”

However, Murray said, civil dialogue remains a hallmark of judicial discourse and debate in the courts, and not just among justices, but among advocate attorneys. Here she cited Ted Olson as an exemplar. “Ted is a lion in this because he is an advocate with an open mind and an open heart.”

“That’s what this whole judicial process is about,” Olson said. “You can’t effectively articulate your side of an issue without understanding the opposing side.” 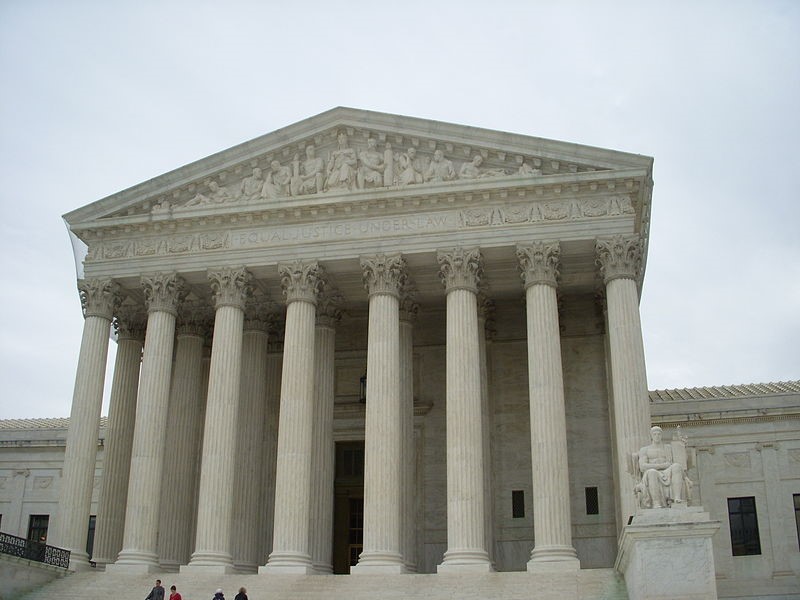