Hannah Calhoon is the founding director of Blue Ridge Labs@Robin Hood, an incubator inside Robin Hood, that asks how technology can enable new models for fighting poverty and expanding opportunity.  The Labs currently runs two programs: A Fellowship that connects technologists and communities to identify and launch new solutions to critical social challenges, and an incubation program, Catalyst, for startups working within one of Robin Hood’s funding areas.

Jennifer Bradley:  What is the relationship between tools and values?

Hannah Calhoon:  Selection of tools should follow from values, and the important question is always, “If we choose this tool or this process, or a data set, or venue, or literally anything, is it actually a values decision?”  We may think it’s an operational process decision, but in actuality it is a values decision. Our very top value in our organizational values statement is humans first.  That means understanding who people are and what they’re bringing to conversations and trying to design interactions and engagements that account for the wholeness of their person and not create extra barriers or stress.

For example, we schedule a lot of focus groups and have other research events that people can sign up for.  A lot of the tools for running an events calendar and having people sign up for things are web-based, but we know that a large portion of the community that we work with for a research perspective, our Design Insight Group (DIG), is primarily phone-based. So we built out a tool that allows us to do surveying and event sign-ups via text message because that’s how our users want to interact with us.  In many cases, we also call our users.  It creates extra work, but it means that we are not excluding a whole category of people.

As another example, we use pre-paid gift cards to compensate people for user research.  Normally for Robin Hood research contracts, we would pay via an invoicing system that would take a week and a half to two weeks between when somebody came and did the session with us and when they were getting their check.  Since a huge portion of the community we work with is really focused on managing cashflows on a weekly or daily basis, making them wait two weeks to get a $50 or $75 check from us, to then take that to a check cashing place and pay a portion of it in fees, is not an ideal system.  It might be ideal from an accounting and invoicing perspective, but it’s totally not ideal from a human experience and human needs perspective.  So we pay people in pre-paid gift cards on the spot.  It’s almost as good as giving them cash, which is their optimal version of payment, and it still allows us to do the things we need to do in terms of tracking and accounting.

Our very top value in our organizational values statement is humans first. That means understanding who people are and what they’re bringing to conversations and trying to design interactions and engagements that account for the wholeness of their person and not create extra barriers or stress.

We didn’t foresee it at the time, but it’s also been really good for helping us build trust and credibility.  It makes it clear that we follow through on what some people feel is a dubious promise to pay them for something that they feel like they don’t necessarily totally know or understand.

JB:  Which tools do you use?

HC:  We try to borrow from a lot of best practices and methodologies that other people have developed.

We talk a lot about community-centered design as a version of the human-centered design process, and there are a lot of frameworks, and tool kits and worksheets around what early stage qualitative exploratory research looks like.  We borrow pretty heavily from the lean start up movement, which has its own set of frameworks and metrics and canon.

We have built a set of standardized documents to help both with recruiting folks, but also to help people understand where they are in the process and what their rights are as participants, and we’ve tried to build a methodology, which we have borrowed from the way research is done in a university setting, to make sure that the people who are participating in our work are treated professionally and respectfully.

There’s a system called Patterns which was originally built by the folks at Smart Chicago.  It’s an open-sourced software platform for managing a user testing group.  We started with that foundation and built some additional functionality that helps us do our work.

A lot of tools for inclusion aren’t things that I would think of as traditional tools.  They’re choices you make about how you design forums for conversation and participation, and what it takes to help people come to those and participate and be present in a way that you would like them to.  For example, at our last Fellowship showcase we had a number of older adults who participated in the research.  We wanted them to come to final presentations, but they don’t get around very well, so we sent a van or a bus to pick them all up at their senior center and bring them over en masse.  So we’re starting to think about transportation as a tool for inclusion.

Our research manager is also pushing us pretty hard about how we think about childcare.  It’s not the same, but we have a couple boxes of kids’ toys, and crayons and paper in our Brooklyn office, so even if there’s no formal child care at an event, it’s 100% okay for folks to bring their seven-year-old around while their mom is having an interview conversation.  Making physical spaces more friendly, accessible, and open is an important piece of how we invite more people in.

We need a broader definition of what counts as a tool.

Since we’re in New York, we have been endeavoring to increase our interaction with communities where English is a second language and thinking about how we make sure we’ve got the right set of translators and how we make sure we’re doing marketing outreach in different languages.

And another thing I’ll mention, which is not a tool, but a process, is being aggressively vigilant about not putting our community members into situations that don’t meet our standards for inclusive participation.  Robin Hood is always looking for ways to bring community voices into donor events.  Part of our job is to say, “We’re not bringing people in to talk about how hard it is to be low-income in New York just for the purposes of raising money.”  We want people to feel like they are adding something of value, and they’re demonstrating expertise and there’s going to be some sort of follow up or feedback loop.

JB:  Which tools do you not use?

HC:  We don’t have formal guidelines or a process around how many of the participants in our Fellowship or how many of the teams in Catalyst are either female or minority founders.  We have spent a lot of time thinking about founder motivation and trying to understand how much the founder really deeply understands the problem they are trying to solve and the validation that they’ve done and the relationships that they have been able to build.  A lot of our founders end up being people who have personal connections to the communities that they’re working with, but it’s not something that we have set a specific organizational goal around.  I know many organizations do, and that can be effective.

JB:  What’s a tool that you wish existed, but doesn’t?

HC:  A lot of the folks we work with don’t have the space to fail.  I wish a thing existed to solve that problem.  It’s easier for higher income people to take the risks and bear the opportunity cost of deciding that they want to create a startup which is 80% likely to fail.  If we truly believe that a lot of the really amazing interventions are going to come from people in other communities, how do we help provide them with the financial cushion and insurance to be able to try to take this step knowing that, even when you’re talking about a 25-year-old with a computer science degree, there’s a chance that they’re supporting family members or they’re sending money home to another country.

JB:  How should we think differently about tools?

HC:  We need a broader definition of what counts as a tool.  When we say “tools,” people tend to go to technology systems and data and frameworks and books, and physical tangible objects, whereas I think a lot of the stuff that actually enables the work looks nothing like that.  And I run a technology incubator, so the fact technology often isn’t the answer is sometimes a tough thing for us to think about.

A lot of the folks we work with don’t have the space to fail. I wish a thing existed to solve that problem.

So much of inclusion is decisions about process and organization, and language, messaging, and communication.  People say “communication tools” and then suddenly you’re talking about mailing lists and Slack and social media, when in actuality, it is the language you use and the pictures you show, and the extent to which it feels like it’s actually speaking to someone as a person, as opposed to telling them what they should do, or trying to talk over their head.

JB:  Is there anything that you want to say on this topic that the questions didn’t elicit?

HC:  Tools are only going to be as inclusive as the people who were involved in designing them want them to be, and as their users demand that they be.  So the most important thing is making sure that we’re bringing in the right voices into the conversation.

This interview has been condensed and edited for clarity. 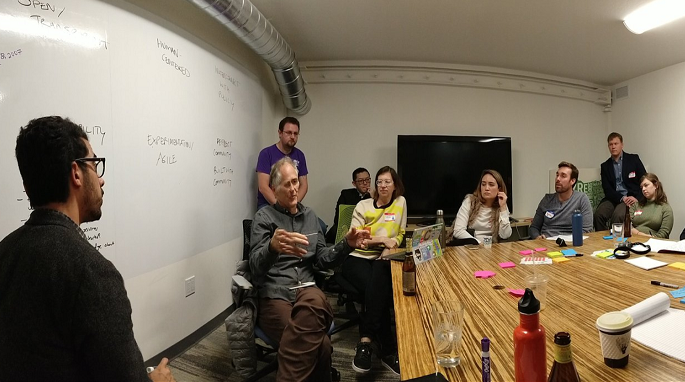